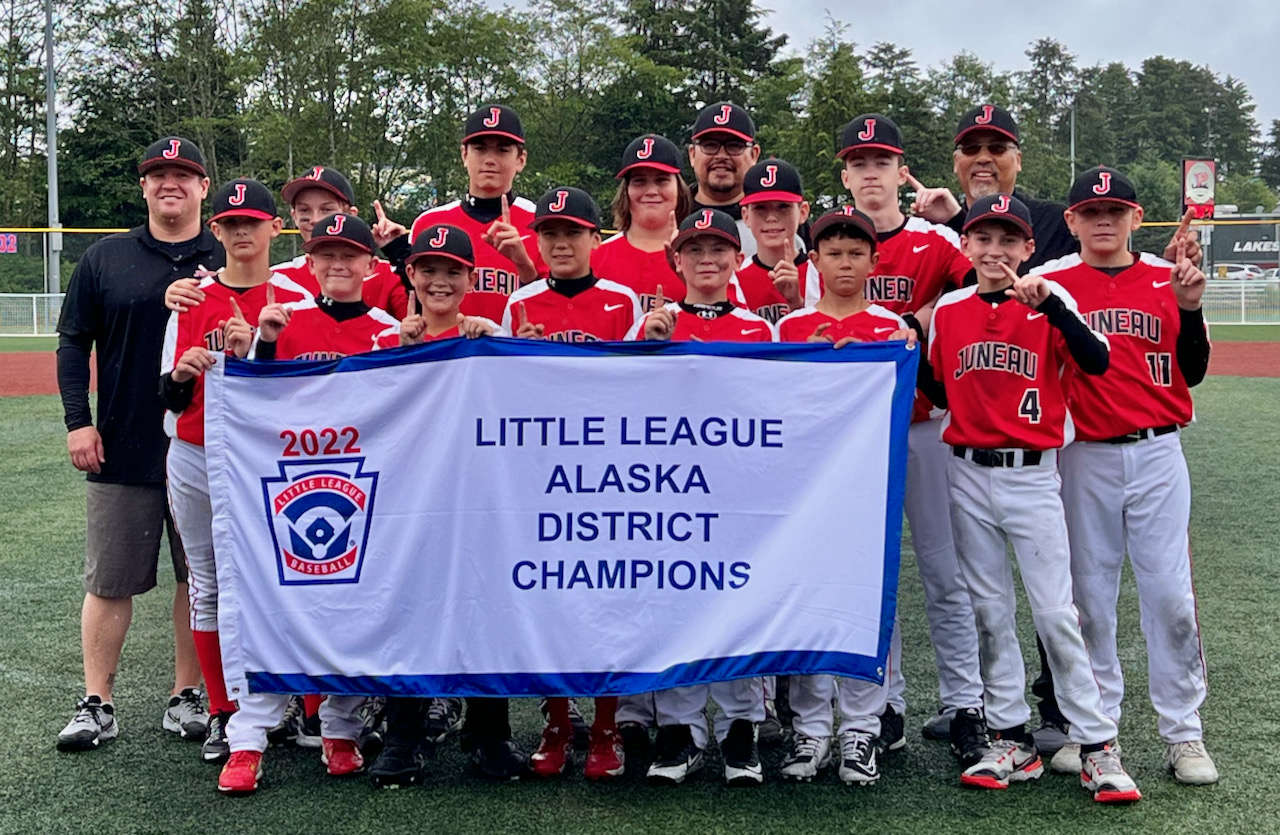 “We came into the game with a lot of energy and it showed,” Juneau manager Jaysen Katasse said. “Our pitchers did a great job today working the strike zone with a solid defense behind them. Overall I couldn’t be any more proud of these guys and how they played all week. But the job isn’t finished.”

Juneau put three runs across the plate in the top of the second inning as Parker Katasse singled, Brenner Harralston singled, Vinny Nizich hit a one-out single to load the bases and Micah Nelson singled to score Katasse and Harralston. Randolph earned a walk and Joshua Beedle singled to score Nizich for the 3-0 lead.

“We worked as a team,” Parker Katasse said. “And we talked to someone special before the game, P.J. (Paul Jones, coach of the GCLL Majors Red Sox team)… a good friend of everybody’s. He coached this year… he helped us with a prayer before the game… it is important to me. We did it for Juneau.”

The Juneau defense was once again incredible as Katasse fielded a ground ball and a line drive and Nizich chased down a fly ball out in centerfield in the bottom of the first.

“It was fun,” Nizich said. “Because we played as a team and we all got hits and did good in the field… my highlight for the championship game was probably after we got all three outs in the sixth inning, and we all just ran on to the field.”

Starting pitcher Begenyi struck out the Sitka side in the bottom of the second inning and Randolph relieved with runners on in the third inning to stop a Sitka rally by forcing pop-fly outs to Henry Maier at first base and Nelson at shortstop. Katasse fielded a ground ball for the first out.

“It was awesome,” Maier said of the championship game. “I think we played really well. It was so awesome. I just love baseball. I don’t know what to say… just teammates and playing the game… I think state will be a blast.”

Juneau put six runs across in the top of the fourth inning as Maier led off with a single and was relieved by pinch runner Beedle. Belcourt doubled to centerfield and was relieved by pinch runner Bode Winkleman, Isaac Kirsch doubled to score Beedle for 4-0, Katasse grounded out to score Winkleman for 5-0, Harralston grounded out to score Kirsch for 6-0. Kohan singled, Kamden Kissner singled and Nelson rapped a hit that scored Nelson, Kohan and Kissner for the 9-0 lead.

Juneau’s Kohan came on the mound in relief and forced a pop-up fly for himself, a fly-ball out to leftfielder Harralston and put the next batter down with strikes.

“This game has been an awesome journey,” Kohan said. “It felt pretty good. Working as a team and making good plays and that stuff.”

Juneau put the game-shortening runs across in the top of the fifth inning as Belcourt earned a one-out walk, Kirsch doubled to score Belcourt for 10-0, and Harralston doubled with two outs to score Kirsch for 11-0.

“I think that we all did a really good job,” Harralston said. “Just working together as a team. Our pitching was the highlight of the game because it was on point. It’s going to be very important, because without good pitching you can’t really do anything because they will just be raking everything. With pitching you always have to believe in your defense… people communicating when there is a pop fly and then doing good jobs with ground balls.”

Juneau’s Belcourt came in to close out the game in the bottom of the fifth and struck out the side. The third strike on the third out was dropped, but catcher Kirsch whipped the throw down the first-base line to end the run-rule shortened game and give the GCLL Majors the title.

“The championship game was really fun because that game we all really played well as a team,” Kirsch said. “In the games that were closer we didn’t play quite as well so it was really fun. I think that we are all really, really good friends even out of baseball so it helps with just knowing each other.”

Harralston had a 3-4 day at the plate with two runs batted in and one run scored. Nelson went 2-4 with five RBI and one run scored and Kirsch went 2-4 with two RBI and two runs scored. Maier, Katasse, Nizich, Beedle, Kohan, Kissner and Belcourt had one hit each. Katasse and Beedle had one RBI apiece. Katasse, Harralston, Winkleman, Nizich, Beedle, Kohan, Belcourt and Kissner scored one run each. Randolph earned two walks, Begenyi, Katasse, Nizich and Belcourt one each.

Begenyi started on the mound for Juneau and went 2.1 innings, allowing just one hit, walking one hitter and striking out three. He faced nine batters and threw 34 pitches, 22 for strikes. Randolph went 0.2 innings, facing two batters and throwing four pitches, all strikes. Kohan went an inning, walking one and striking out one. He faced four hitters at the plate and threw 13 pitches with eight strikes. Belcourt went an inning with three strikeouts, facing three batters with 15 pitches thrown, nine for strikes.

“I loved playing this game,” Begenyi said. “It was amazing pitching and it was a pretty fun experience… it’s great to be on the mound. I love pitching.”

“I think it is going to be a lot harder,” Nizich said of facing Abbott-O-Rabbitt. “We’re just going to have to work harder as a team and keep doing what we have been doing.”

He said the best part of baseball was “getting hits, making plays in the field and making new friends and hanging out with your friends.”

On facing Abbott-O-Rabbitt, Kohan said, “I’m a little scared but I think we can do it.”

Begenyi said, “I think we definitely can beat them. I think we work probably harder in practice than they do and I think we can take them.” 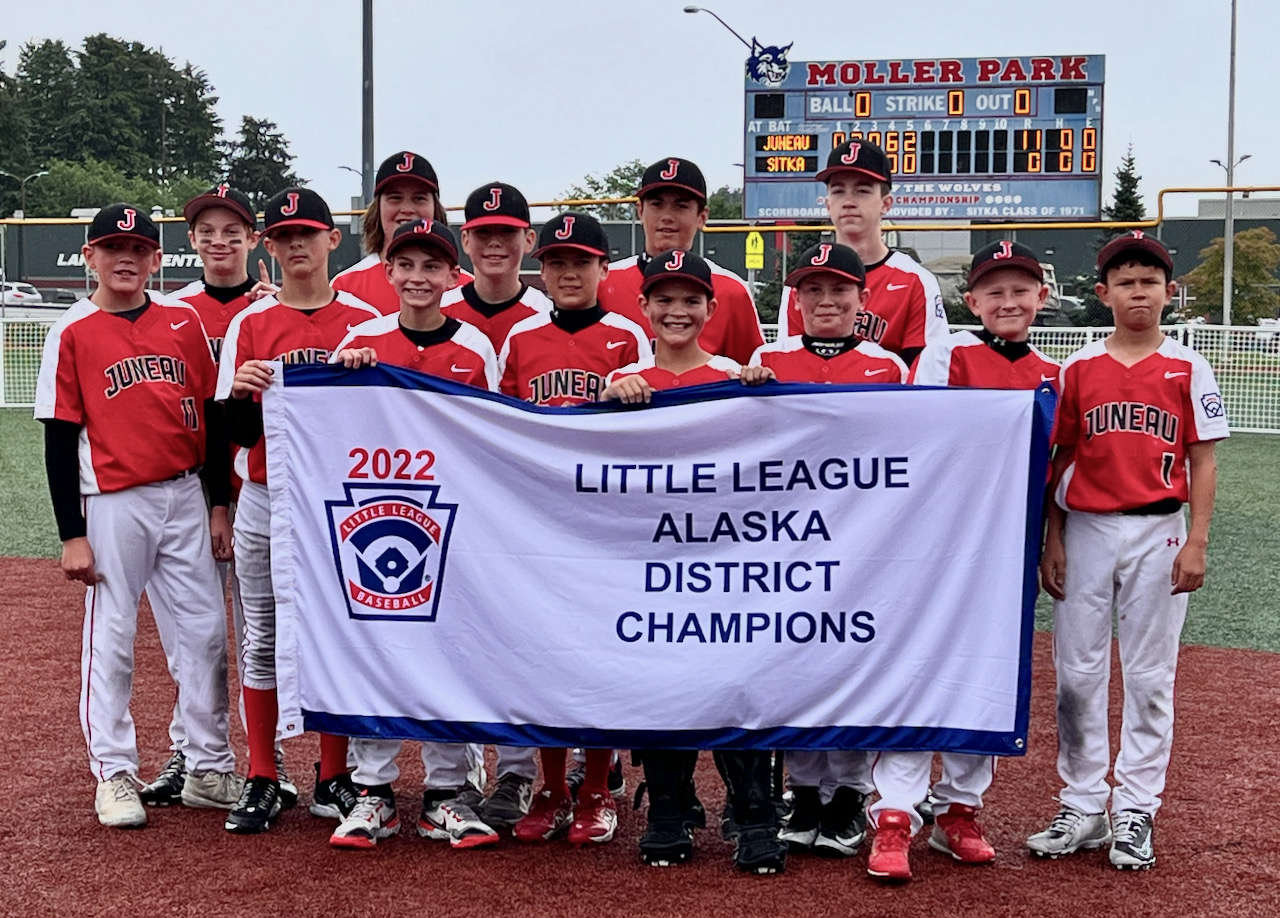 Above - Juneau's Gastineau Channel Little League Major All Stars are shown with the District 2 Championship banner at Sitka's Moller Field on Saturday.