Juneau, Alaska (KINY) - Juneau’s Team Forget-Me-Not youth synchronized skating team’s IDEA homeschool sophomore Melissa Maxwell, who has been skating 12 years, and her sister Rebecca, an IDEA ninth grader skating for 10 years, both “really love jumps." Which is appropriate because like other sports in this pandemic period, the Juneau Skating Club has had multiple hurdles to overcome before being able to head to the 2021 Synchro Fall Classic in Irvine, California, Nov. 12-14.

“It is just going to be super fun because we have all these new teammates with us and it is just a time for us to build and start working together and just be super fun,” Melissa Maxwell said.

Maxwell commented on the hardest part about skating.

“Probably staying on your feet,” she said. “You are on a blade on the ice and everything… coordination and all that stuff, working to coordinate your body through your skates.”

To coordinate that through a team of 13 is strenuous, physically and mentally.

Maxwell also takes individual lessons and has become a leader on the ice. She said her favorite skating move is the Lutz jump.

“Basically where you jump into the air and turn and twirl a bunch. It's really fun,” she said.

Her sister, Rebecca, is a fearless skater with speed and talent, who said, “I love to be on the ice. I love how fun it is.”

That fun and love of being on the ice nearly was lost as COVID-19 shut down or limited Treadwell Arena ice time.

“It was tricky,” Team Forget-Me-Not coach Leah Farzin said. “It is a sport where the kids are really close to each other and they have to touch each other, it’s part of the sport. They had to practice without any contact for a long time because we weren’t sure about what was going to happen.”

Eventually they received permission from the City & Borough of Juneau to connect with each other in practice with a minimum number of people on the ice.

“The biggest thing was they had to forgo their entire competitive season, there just weren’t competitions that we were able to go to,” Farzin said. “There weren’t many competitions period. They didn’t have any live performances.”

The team did get to do a taped performance in April as part of the JSC’s “Seasons of Change” which they put on YouTube and aired in a special showing for locals at a makeshift drive-in movie theater.

“It was actually incredibly impressive,” Farzin said. “We had 10 people on the team last year and they showed up every Saturday at 6:30 in the morning and practiced really hard until 9 o’clock every week even though there were no performances to go to and our only performance was going to be this videotaped ice show.”

Three of those skaters graduated, one is in another sport, and six returned to help establish the current newcomers to the roster of 15 that have moved up in skill level.

“Everyone improved as skaters last year,” Farzin said. “They were all able to skate individually and work on their skills and be promoted to this team.”

Another fallout from last season was that the adult team did not carry over to this year and other programs also lagged behind.

Blending any team can have challenges and Team Forget-Me-Not has the added nuance of combining skaters from IDEA, Thunder Mountain High School, Juneau-Douglas Yadaa.at Kalé, and Floyd Dryden and Dzantik’i Heeni middle schools.

TMHS junior Aliyah Overturf has been skating for six years.

“My favorite thing about skating is the people I skate with,” Overturf said. “And I love how challenging skating is. A lot of sports you can kind of pick up really easy but skating you really have to work for a long time before you get to a level where you are comfortable on ice.”

Overturf said the California competition will be exciting.

“I’ve never competed with a lot of these girls, and boys, before and I’m just hoping we have a lot of fun and make sure we are encouraging each other a lot.”

“The whole concept of synchro is doing the same thing at the same time and I think it is a lot harder than people imagined because one beat off and you can completely tell.”

Her favorite move is sit spins and she hopes to skate at the college level.

“On a team or just as an individual,” she said. “And then hopefully I can coach on the side sometime.”

TMHS sophomore Sophia Nylen has been skating for eight years. She brings excitement, passion and eagerness to the rink.

“One thing I really like about skating and synchro is the adrenaline,” Nylen said.

JDHS sophomore Maggie Higgins has been skating for nine years. Farzin said she brings personality to the team and it is not uncommon to see her at other skating sessions working on synchro.

“My favorite thing about skating is the shows,” Higgins said.

TMHS sophomore Angelica Rodriguez has been skating since 2010. She is newer to the team but has risen to the occasion and works hard.

“I like synchro because I get to hang out with a lot of good people,” Rodriguez said.

TMHS sophomore Jade Hicks has been skating since 2015.

“One thing I like about skating is that it is all about self-improvement,” Hicks said.

TMHS junior Carly Phelps has been skating for 10 years. Farzin said she is a seasoned member of the team, reliable and dedicated, and shows up to every practice and works hard.

“I love the way I am able to connect to the music,” Phelps said.

TMHS junior Lydia Powers has been skating since age 10.

“My favorite thing about skating is being on a team and traveling together,” Powers said.

FDMS eighth grader Ellis Gottschlich has been skating for six years. Farzin placed her to a program spot that takes her out of a comfort zone but one she is taking on without worry.

“My favorite thing about skating is that everybody is friends,” Gottschlich said.

DHMS eighth grader Sam Lagerquist has been skating nine years. He is the first boy to skate on the team and has been given a spot in the routine that takes him out of his comfort zone but one that he has worked hard to achieve.

“One thing I love about skating is just the community that it builds and the friends that you make,” Lagerquist said.

DHMS seventh grader June Troxel has been skating since she was six.

“My favorite thing is learning new tricks,” she said.

DHMS eighth grader Paige Kirsch has been skating seven years. She is a newer skater to the team but one who has impressed the coaches with her improvement and skill level.

“One thing I really like about skating is being on a team with all my friends,” Kirsch said.

TMHS sophomore Kennedy Love has been skating for six years and Farzin said her energy and work ethic are contagious.

JDHS senior Dominique Morley has been skating for 10 years. She is the most senior member of the team and most experienced synchronized skater. She has developed from a middle school skater that went to others for help to the person that others approach for advice and guidance.

“One thing I like about synchro is how close you get to people you are skating with,” Morley said.

They will have just one time to show it on the ice and will be judged on the difficulty of six required elements and the quality of how they execute them.

The elements include a circle, a pinwheel, a block, a line, an intersection and an artistic element that repeats one of the previous five more creatively and with more difficulty.

They will get three hours of practice time on the ice when they arrive which allows them to work on a new obstacle - the arena.

“The ice can feel really different,” Farzin said. “Treadwell is very good quality ice but they keep it a little bit on the colder side because of all the hockey played on it, so it’s colder and faster. Figure skaters like it a little bit softer. It’s just a matter of degrees, very small increments, but you can feel it.”

The Treadwell rink is colder than the competition rink in California as well and the competition arena has attendance seating around the whole rink, not the limited one half side like their home ice, so acclimating to backgrounds will be an issue.

“We will go to the rink earlier than our practice time,” Farzin said. “So the kids can see other teams practicing and see where they enter and leave the rink… ideally in figure skating is what you have done is practiced the program so many times that it doesn’t matter how you feel when you step on the ice and it doesn’t matter what you are looking at. Once the music starts you just go and your body just does it. You look at the same people you always look at and you have the same spotting you always see, you do the steps at the same time and move your head at the same time, all that stuff.”

The team has the option to not wear masks at the competition. California is following the rules of United States Figure Skating, and one rule this year is that everyone in the building has to wear a mask except for the athletes on the ice competing.

“We don’t actually have to but it is how we have been practicing and how we have been working,” Farzin said. “It’s a safety precaution and with all the other calculated risks we are taking in traveling, and competing, and staying in hotels… having the masks as they skate is just part of their normal thing and we are in favor of. Because we practice with them and I think that is important in maintaining a level of safety and piece of mind, just being consistent… You do lose something. You don’t have their faces, a lot of synchro is practicing your facial expressions, practicing what is going on in the music and making eye contact, engaging the audience, and missing the lower half of your face is a lot harder. I have been assured by officials that we won’t be penalized.”

Farzin said the hardest thing about figure skating is making it look easy.

“I think one thing that a lot of people don’t realize is that skating any program for two, three, four minutes… and the very highest level individual and teams skate four sometimes four-and-a-half minute programs… it is incredibly tiring,” she said. “And you are expected to do it and it is supposed to look effortless. Probably the hardest thing about any discipline of figure skating is that it is really hard. You have to do it perfectly and it has to look easy… synchronize skating really rewards skaters who have really good fundamental skills, whose every step is beautiful, they have nice posture and presentation and they make all their hard work look effortless.”

The assistant coach is Emily Bowman and team managers are Nicchia Leamer and Tracey Maxwell. A podcast of this story is online at KINYradio.com (click the On Demand tab and click on Alaska/Juneau Sports). 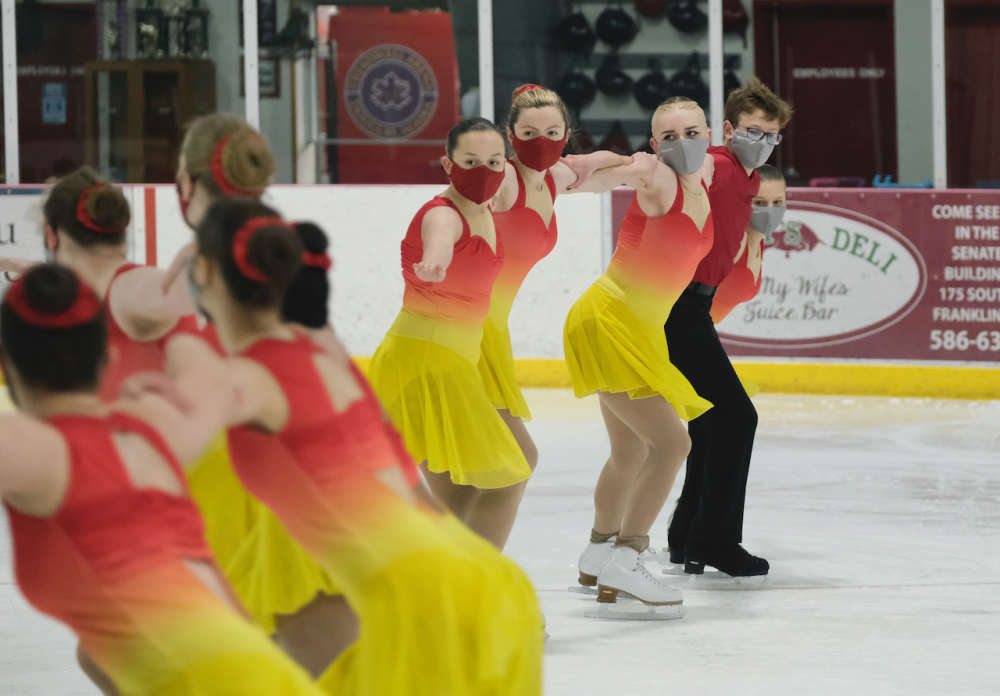