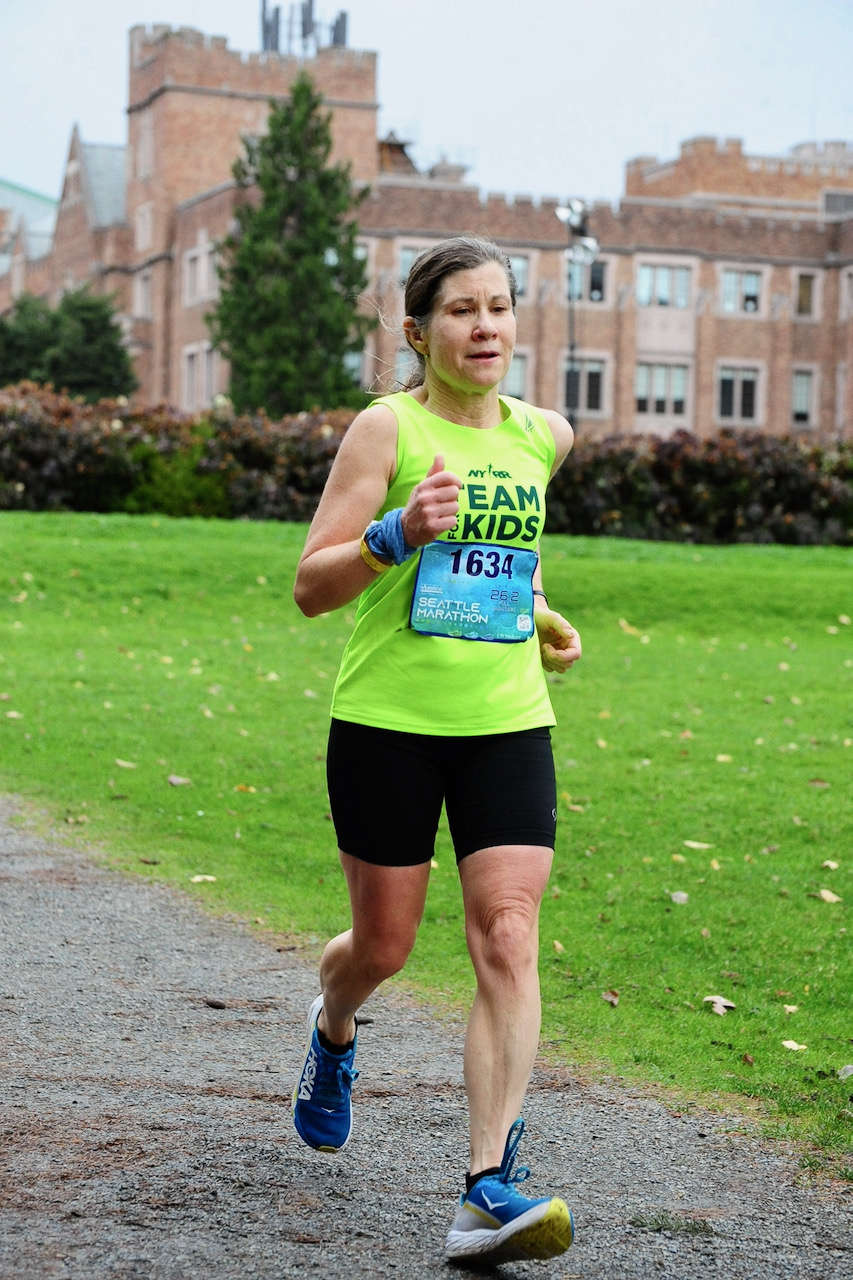 “The hardest part was at about mile 21,” Johnson said. “It was on the University of Washington campus and I had been thinking that it would be exciting to reach this point because I went to graduate school there and I was thinking I would feel totally inspired. But I was so exhausted by then. It became a mind game of just finish up.”

Johnson said her mindset became, “Just do it, one step ahead. It is going to hurt but every step you take is going to get you closer, Get to the finish line before the atmospheric river was supposed to hit.' There were warnings that it was going to start raining really hard. It was a delight to get back to Gas Works Park before the raining started.”

Johnson made turkey pot pie with Thanksgiving leftovers for her big meal the night before the race, which would serve as her major fuel source during the run. The morning of the race she had toast with peanut butter and a banana.

“I wasn’t tantalized by any GUs or anything during the race and I think that is one of the reasons I was so tired,” she said. “I was probably a little depleted. My old housemate Connie Gold supported me with some crackers and that set me back on track.”

Johnson began to train for the race about six months ago. She had been doing some light jogging, and she did run a bit with her son, Juneau-Douglas Yadaa.at Kalé senior Aubrey Hekkers.

“He usually leaves me in the dust. He doesn’t run with me very much but he did do one training run with me in New Hampshire this summer,” she said.

“It is so key,” she said. “To set some goals and share your interests and before you know it you have more of a team than you realize. My family has been incredibly supportive. Mike and Aubrey have been great, and of course our dog Cooper is ready to go any second.”

Johnson had intended to run an upcoming marathon in Norway instead of Seattle.

“But that was a Summer Solstice run and I thought, ‘You know, I am feeling good now, why not just do it?’ and my son, Aubrey, has certainly been an inspiration,” Johnson said. “We did that training run together this summer and it made me start to think, ‘Why not just do what’s easy? Just go to Seattle and run in one of the first in-place marathons that is happening in a while.' It was a great opportunity.”

Johnson said the coronavirus pandemic has not been an issue for her training in Juneau.

“It wasn’t even an obstacle,” she said. “It’s an opportunity just to get out and be healthy and celebrate the things you can. Get out in nature here in Juneau where we are blessed that we can get out and experience hiking and skiing and we can do that in a safe manner.”

Since she was 20 years old, Johnson has run a marathon in every decade of her life.

“I did run two marathons in my 40s,” she said. “The first time I qualified for the Boston Marathon.”

With her top age group time in Seattle, Johnson has qualified for her third Boston. The other two qualifiers were in Juneau in 2006, her only Frank Meier - now Juneau - Marathon, and New York in 2014. She also ran the Portland Marathon in 1988, Seattle in 1993 and Boston in 2007.

Her favorite marathon was in New York City.

“They all have pluses and minuses,” she said. “I loved running the New York Marathon because you are going through all the boroughs of New York and seeing the differences and all the enthusiastic people. But of course is was exciting to be in the Boston Marathon. Just all of that history.”

Johnson said she ran sparingly in high school, but at that time it was mostly as training to stay in shape for the crew, or rowing, sport.

“It was at that point where women’s sports didn’t exactly get the support that the men’s sports do and we weren’t able to get our crew team,” she said. “But I certainly participated in swimming and other activities.”

Johnson said staying in shape year around is not just for athletes but also for maintaining a healthy attitude.

“It is also good for everybody around you,” she said. “It is all about a team and the support I felt from my family and friends really made the difference in my marathon. And I think it really makes a difference in your life in that it is so important to accept the positive energy that people give out all around you. This time, and always, it is good to take care of yourself and take care of your friends, and they are out there.”

Johnson had advice for anyone wanting to run a marathon.

“Just download a plan,” she said. “You would be surprised. You just chip away and all of a sudden you are ready to go. I suggest go for it.”

She also suggests finding life goals, such as art and science and other athletic endeavors.

“I think it is a perfect combo as a great way to live,” Johnson said.

There is one favorite run that Johnson does hold above all others.

“Up Perseverance like many other people,” she said. “It is really the best.”