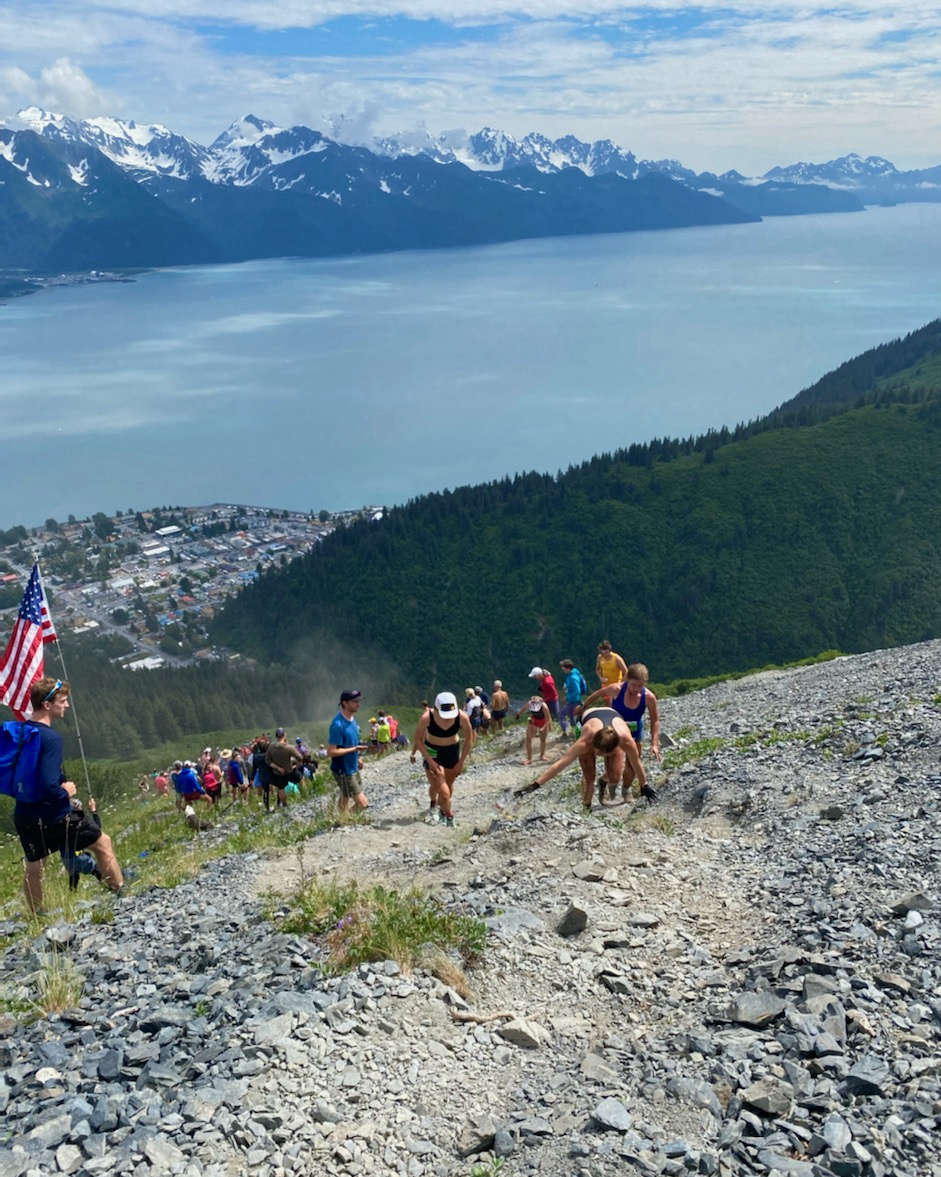 Juneau, Alaska (KINY) - Roughly one week after setting a 15-mile women's record in the Juneau Ridge Race, Abby Jahn, 29, took that earned victory entry into Monday’s world-famous Mount Marathon in Seward, placing 15th for women with a time of 59 minutes 36 seconds and sixth in her 18-29 age group.

“I am feeling good about it,” Jahn said. “It was my 10th year racing Mount Marathon in the adult race and so it was kind of this moment of just enjoying the experience and enjoying that community for a little bit. I’m going to take a break after this year so this was more like just enjoying the last race for a while. I’ve been doing it for a long time…”

World champion mountain runner Allie McLaughlin, 31, from Colorado Springs, Colorado, won the women’s race and set a new Mount Marathon women’s record by 39 seconds with a time of 47:09, five minutes faster than her closest competitors in the field of 271 female racers. Overall, McLaughlin posted the seventh fastest time and Jahn the 89th out of all 564 adult competitors.

Jahn has had multiple years of placing in the top 10 women in under an hour.

“The race is getting more competitive every year and so it is harder to break into the 10 even if times are consistent through the years,” Jahn said. “My goal is to do as fast as I could on the climbs but kind of take it a little easier the first third. It’s really easy in Mount Marathon to overdo it and redline... You don’t really have an opportunity to recover so you have to be pretty careful about how much you push yourself in the beginning of the first half of that race even though it is not very long overall but it is easy to get tired and burned out really quick on that.”

The 3.1-mile Mount Marathon course, considered the toughest mountain race in Alaska, starts with a 3/4 mile sprint from downtown Seward on a very slight incline to the mountain’s base.

Once hitting the base of the mountain, racers only have roughly a mile trail to the turnaround point at Summit Rock. However, that turnaround is at an elevation of 3,022 feet achieved with an average climbing slope of 34 degrees.

The first minutes of the lower mountain are more than a scramble as racers choose either a root or a cliff ascent route.

“I took the roots this year and in the past I have taken the cliffs,” Jahn said. “You have to pull yourself up with your hands. You’re kind of doing a bit of free climbing. Once you get up above that section it is this dirt trail that winds along the mountain… you do a lot of power hiking. There is not a lot of running when you are on that dirt trail…”

Racers' hands are usually on their knees as they lean into the mountain, except when grasping for holds on roots or cliff rock or losing footing in mud or dust in a forested slope. A slip can result in taking out runners trailing behind.

Coming out of the forest and dirt trail, runners face an incline of gravel, rock and scree and are now halfway into the ascent.

While getting some cool air in the open this is also where calves and lungs are hitting their maximum output. Any route to the top is now fair game and the more experienced racers have their preferred way.

“It turns into shale and you are picking your way up the long loose shale,” Jahn said. “And this part is really steep so it doesn’t have a lot of run-able sections…”

At the top fans give racers a boost with cheers of support. Jahn reached the summit in 43:14.

“And then you top out and round the corner… and then you kind of ski, run, fall, descend down shale…”

While the hardest part, the climb, has been achieved the most dangerous part, the descent, is greedily eating up tired legs and bodies as racers take the brakes off their shoes and hurtle down the mountain.

Experienced racers call the descent a controlled fall. If seen from below, trails of dust follow each runner as they sprint down sharp scree.

After the scree field racers hit "the gut." Jagged rocks, ledges, tree limbs and boulders lead down a watery ravine.

“The scree field sort of funnels you into the high-walled gut,” Jahn said. “And it has a bunch of waterfalls in it. And you can jump off the waterfalls or go around around them. This is the section where you can make or break your race in terms of placing and also in terms of injuring yourself…”

This is also where most injuries occur as tired legs try to navigate what is basically an obstacle course down a mountain stream.

Runners next must choose either the cliff face exit left or the switchback safety trail right. Most racers hit the cliffs for faster times. Only experts split the two and hit a more difficult section called “the falls,” essentially a vertical wall that with any misstep results in a potentially fatal fall.

“No cuts this year,” Jahn said. “That was kind of the goal this year was to come out unscathed and just enjoy the day…”

Once down, last but not least, is the 3/4 mile sprint back to the finish. Jahn came off the summit and to the finish in 16:23.

“It feels really good to get off the mountain,” Jahn said. “It is always fun to come down. There is a big crowd at the bottom of the mountain… some folks will do a jump off glory rock, other people will just run down. I’ve face planted a couple times in front of that crowd, too, so there’s a chance to make a fool of yourself or have fun with it…”

The Mount Marathon juniors race is along the same course as the adults but with just half the mountain to scale. Palmer’s Colby Marvin, 15, whose mother Christy Marvin has won the women’s race twice (2013, 2016), won the 139-field boys race in an age group record 25:27. Anchorage’s Rose Conway, 14, won the 106-field girls race in 33:18. Kenai sisters Tania and Jayna Boonstra placed second and third with 33:41 and 34:47, respectively, just days after finishing the Lynn Canal Running Camp in Juneau.

Jahn still has her racing calendar out.

“I think I might do Resurrection 50, which is a 50 miler on the Kenai Peninsula at the end of July,” she said. “I might be doing the Nifty Fifty (Juneau, Aug. 13) or some other longer races and then of course gearing up for coaching high school cross country in the fall… I’ll take a break in October.” 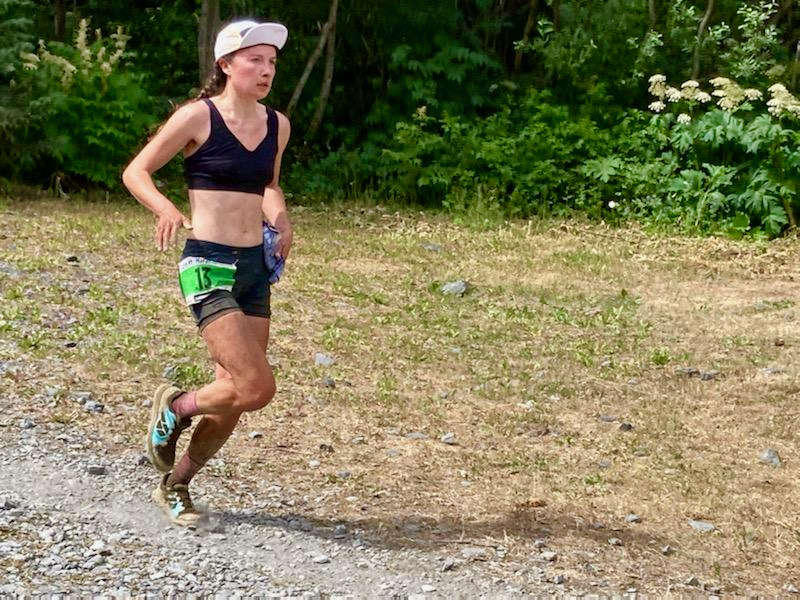 Above - Abby Jahn is shown Monday after descending Seward's Mount Marathon and starting a half-mile sprint to the finish. (photo courtesy Abby Jahn) 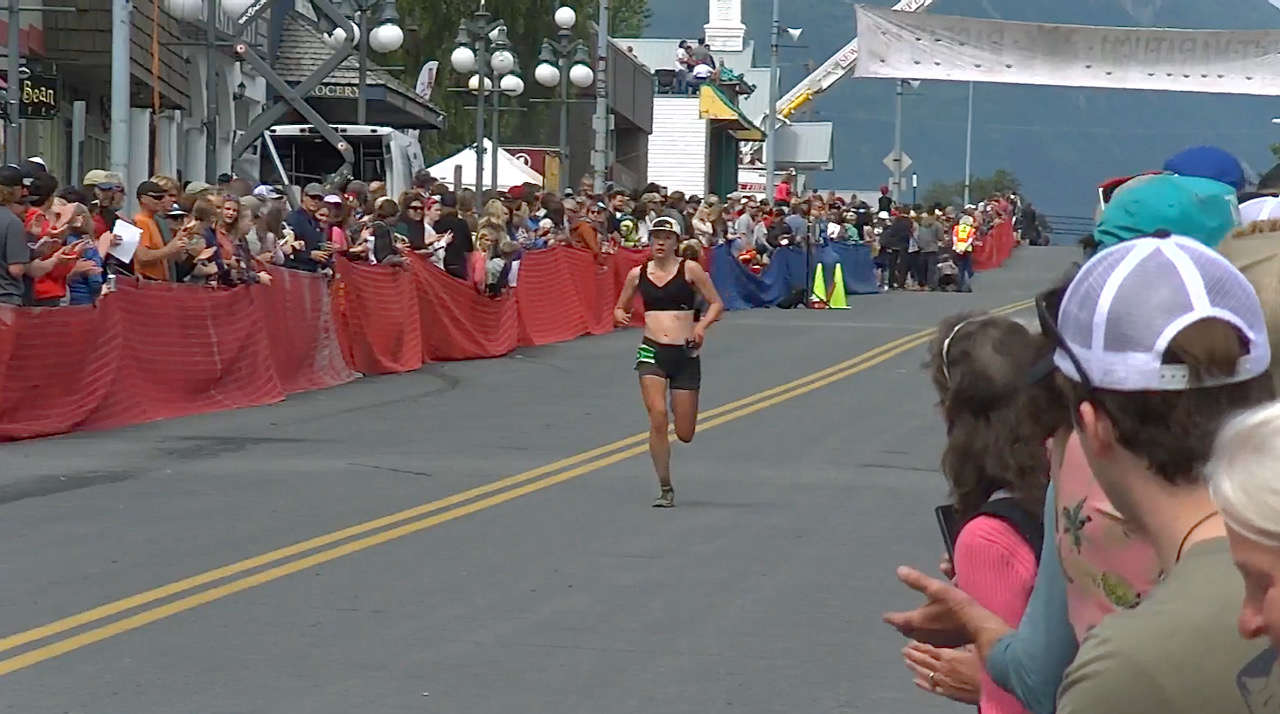 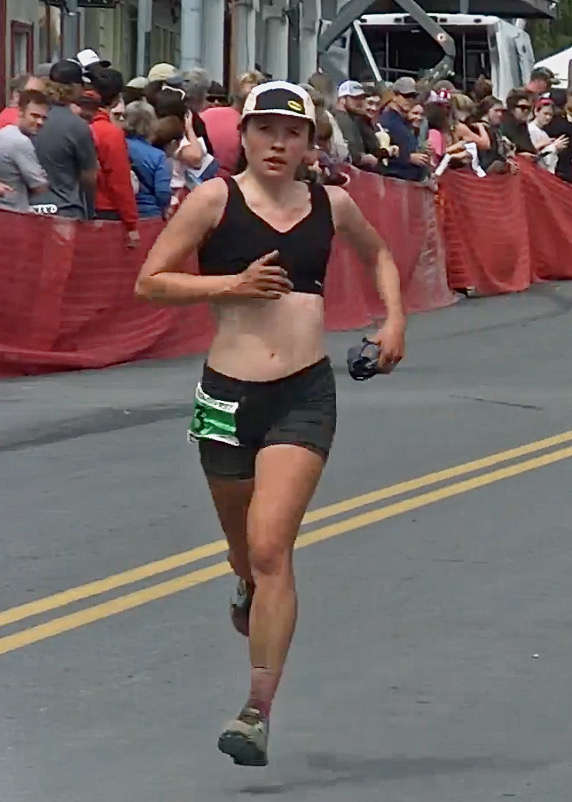 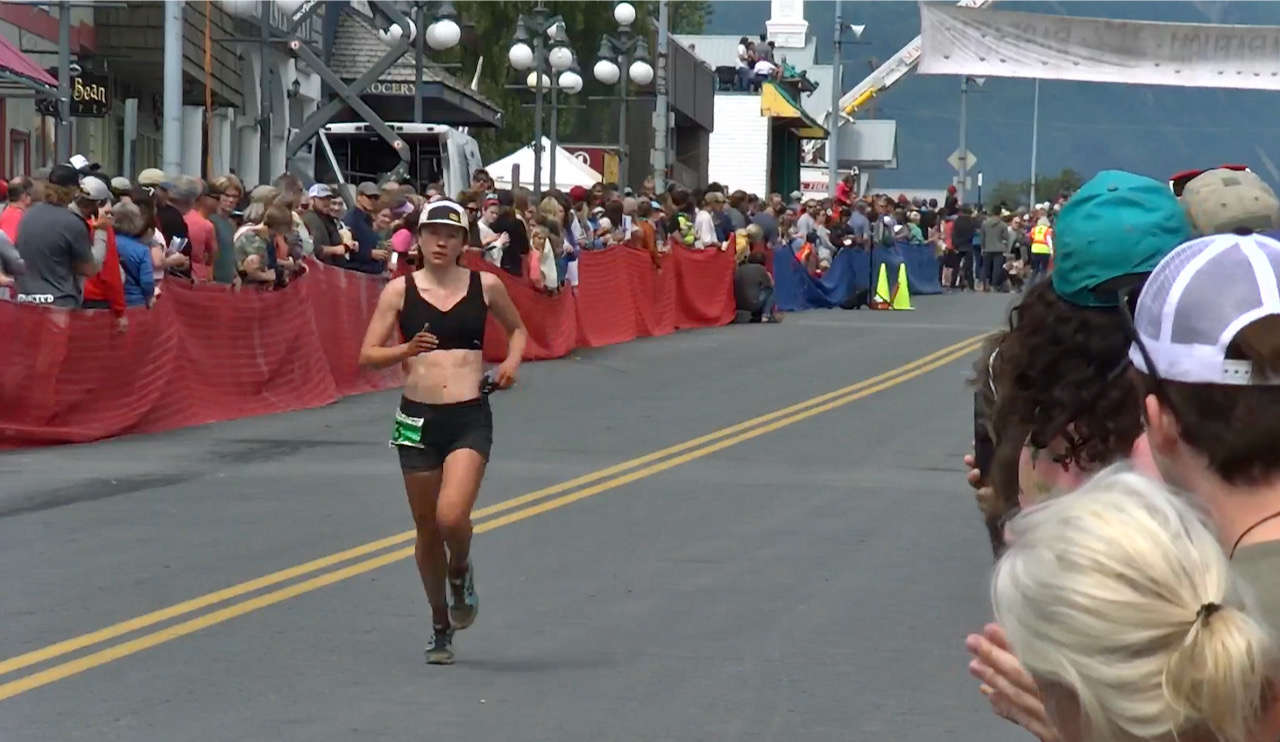