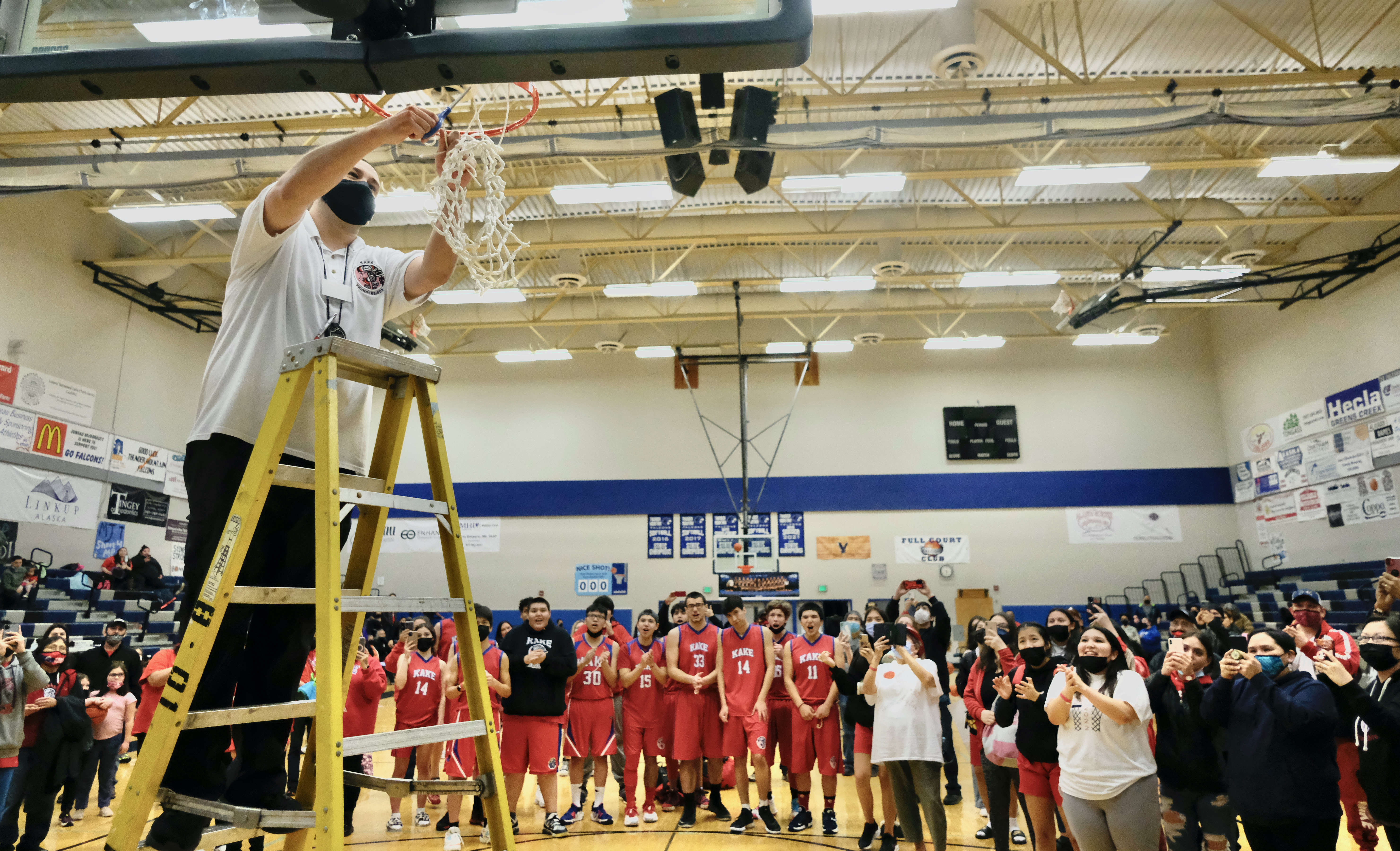 Juneau, Alaska (KINY) - At first glance it appeared someone had let Kake’s men’s Gold Medal basketball team into the tournament, in reality it was the Kake High School Thunderbirds and their ‘old school’ style of play that crushed the Klawock Chieftains 60-33 to win the 2022 Southeast Region V 1A Boys Basketball Championship at Thunder Mountain High School on Friday.

“That’s exactly what we want,” Kake coach Anthony Ross said as fans embraced the Thunderbirds on the court after their win. “That old school run-and-gun man, run-and-gun.”

The gun sites were set far out from the start as Kake juniors Ethan Kadake and Nicholas Davis exchanged long-distance bombs with Klawock junior Dalton Wyzykowski and sophomore Marley Kness.

Klawock junior Emett Fairbanks made a free-throw for a 7-6 lead but back-to-back buckets by Kake sophomore Sidney Austin and Kadake gave the Thunderbirds a 10-7 advantage.

Klawock’s Kness was fouled on a shot past the arc and made all three charity shots to tie the score at 10-10 but it would only last a moment as Kake sophomore Dominic Ross snuck behind the defense for a quick basket and a 12-10 first quarter lead they never relinquished.

The Thunderbirds opened the second quarter with a rebound score by junior Brandon Ward and a fast break layup from sophomore Tristan Ross-Shaquanie for a 16-10 lead.

“It feels very good,” Ross-Shaquanie said after the game. “I have a lot of confidence in my team. I was the point guard, I was just keeping calm, looking for open people… we’re just running and gunning all the time.”

Kake hit full gear with a pressing full court defense that gave them the ball often.

All four of Klawock’s second quarter points came at the charity stripe, two each from senior Jacob Isaacs and Fairbanks.

While Klawock could not buy a basket, Kake was handing out dimes right and left, opening the third quarter on a 12-0 run on a free-throw and basket by Ward, two baskets by Ross and two power shots inside from senior Dakwaneek Crookes.

“I feel pretty good,” Crookes said after the game. “Hard work and effort means a lot you know. I’ve been playing with them since I was little. We’ve been fighting through this last year as teammates… just keep working hard at it and you’ll achieve whatever you are working toward.”

Klawock’s Kness put the Chieftains first point of the stanza in from the charity stripe, then he was fouled on a scoring basket and made the extra shot and Wyzykowski scored to trail 41-22.

Kake answered with a basket apiece from Davis and Ross for a 45-22 lead with eight minutes left to play.

Klawock had their best quarter of the game with 11 points in the final stanza but Kake put up another 15 points to close out their tournament with a Region V Championship, 60-33.

“It feels amazing man,” Kake coach Ross said. “Just for these kids who have worked their tails off all year long. What we have gone through the past two years… It’s all about them. They earned it every step of the way… Turning Boys Into Men, a great program that we run, and men into champions. They’ve earned it. They do it inside the classroom, in the community and on the basketball floor, all three phases of life.”

Klawock, rated #4 in a 1A state basketball poll, had their worst shooting night of the tournament, due in part to the pressing Kake defense.

The Chieftains hit just two 2-pt field goals and six past the arc while the Thunderbirds tallied 20 inside the arc and another five outside.

Kake will be the #1 seed from the Southeast Conference at the ASAA March Madness Alaska 1A Basketball State Championships, March 16-19, at Anchorage’s Alaska Airlines Center.

The loss of the 2020 season and the uncertainty of games and pandemic restrictions from 2021, left the Thunderbirds scrambling for ways to play.

“We were scrimmaging alumni for a while… it was tough to get through but they stayed with it,” Kake coach Ross said. “They stayed the course. They believed in each other. They believed in the program, and in the end they became champions. These boys are awesome. They are in the community, they are respectful… I can’t say enough about them. They are just an awesome group of boys. A lot of them I have taught since second grade. A lot of these boys I have raised up since second grade. To see them come through and to have this in the finale is amazing.” 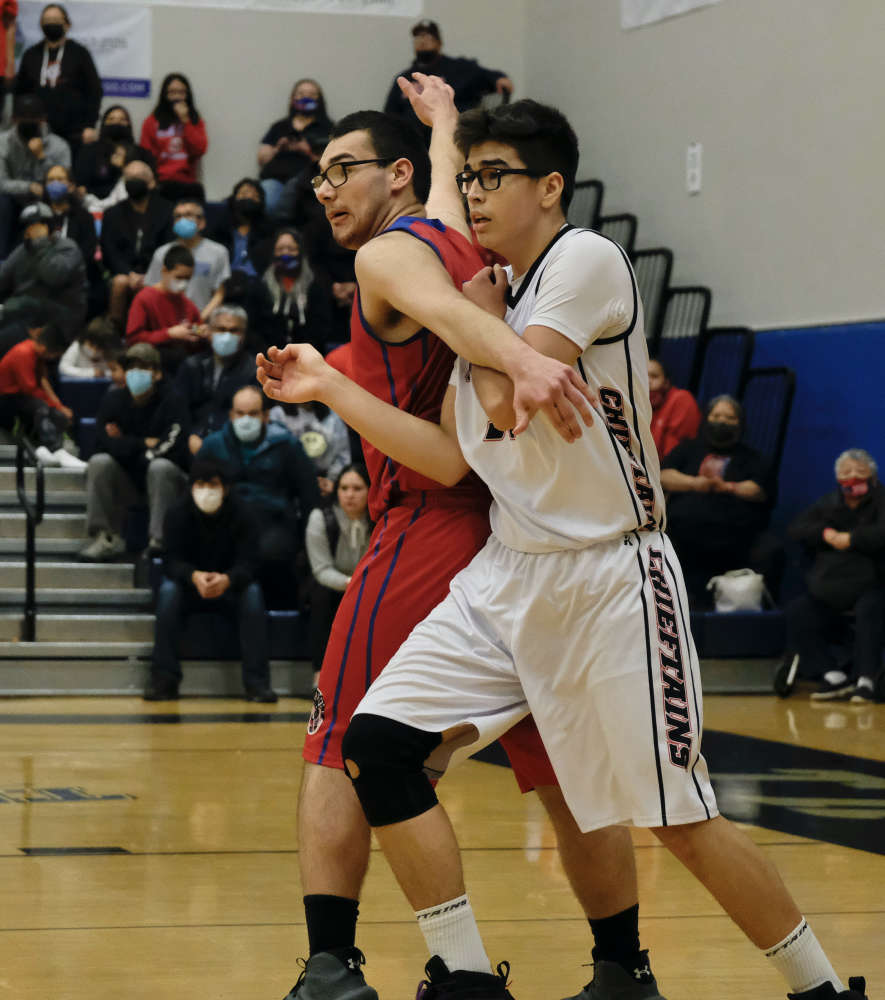