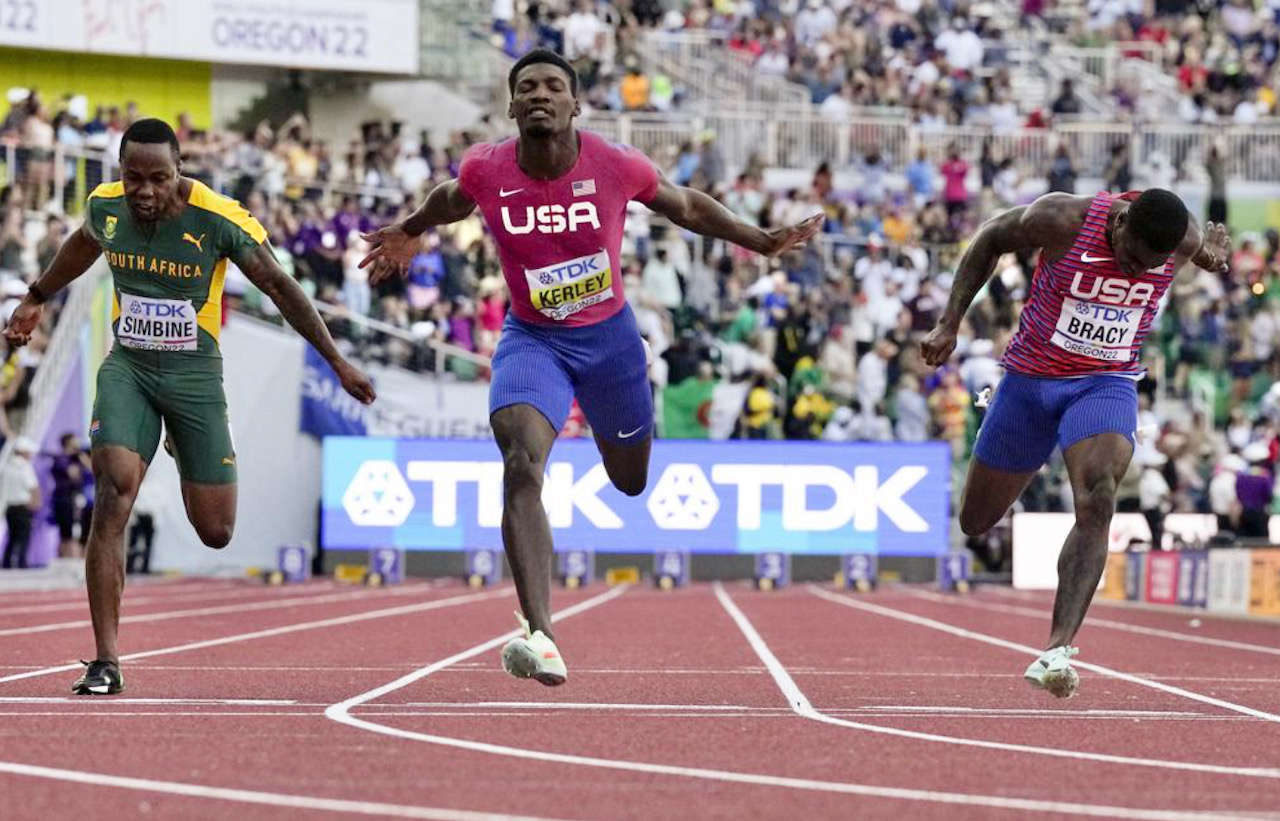 Fred Kerley, of the United States, wins the final in the men's 100-meter run at the World Athletics Championships on Saturday, July 16, 2022, in Eugene, Ore. (AP Photo/Ashley Landis)

EUGENE, Ore. (AP) — Before the race, U.S. fighter jets zoomed over the stadium. Then, down on the track, Americans flashed a different kind of speed.

Fred Kerley led the charge Saturday on an All-American night for track and field, headlining the first U.S. sweep of the sport’s marquee event, the men’s 100, in 31 years at the worlds. It placed a red-white-and-blue stamp on Day 2 of the first championships held on American soil.

“We said we were going to do it and we did it,” Kerley said in the on-track interview, moments after the crowd had finished chanting “USA! USA! USA!”

Kerley powered through the line to finish in 9.86 seconds and beat both the leaning Marvin Bracy and the 2021 U.S. champion, Trayvon Bromell, by less than 0.02 seconds. The difference between second and third was 0.002.

It marked the first American sweep at the world meet since Carl Lewis, Leroy Burrell and Dennis Mitchell went gold-silver-bronze in 1991 in Tokyo.

“It’s amazing,” said Burrell, who was on hand. “And honestly, I wouldn’t have expected less from the group. This is one of the best groups of U.S. sprinters we’ve had in years.”

This All-American burst of speed came moments after the jets presaged the evening’s main event by blazing over Hayward Stadium, the still-cozy confines on the University of Oregon campus that were renovated to bring the championships to the U.S. for the first time.

The race itself brought back memories of times when the U.S. dominated the track game in the same way Jamaica and Usain Bolt did for nearly a decade starting in 2008. Some might call that the good old days — Lewis was a star and Burrell and few others certainly filled the stands. That was also a time of the sullen track superstar and an era marred by doping.

This one felt more like a bunch of comeback stories and “I told ya so’s.”

Kerley, the 27-year-old Texan, came into Eugene as the favorite — the only sprinter to crack 9.8 seconds this year. His reward is a title in an event he didn’t start investing time in until the leadup to last year’s Olympics.

In an interview on former U.S. sprinter Rae Edwards’ webcast earlier this year, Kerley explained the reason for the move down in distance.

Now he is — and part of the fastest team in the world, too.

The runner-up, Bracy, was a scholarship football player who left Florida State to pursue track, then went back to the gridiron for a couple of unsuccessful tryouts in the NFL. Now, he has a silver medal.

“I went to play football for three years, obviously that didn’t work out, ” Bracy said. “So to come back to do this, it just means everything.”

Bromell was the favorite at the Olympics last year, but didn’t make it out of the finals. He was a relatively forgotten man at these worlds, and starting on the outside in Lane 8 certainly didn’t help him in the final.

“A lot of people didn’t expect us to do this, obviously from what happened to me in Tokyo,” said Bromell, who almost walked away from the sport a few years ago due to Achilles injuries. “So we just hope we gained some respect tonight.”

The ultimate respect might come next weekend. All those medals are certain to ramp up expectations for next weekend’s 4x100 relay, an event with which the U.S. has had notorious and long-running trouble.

Kerley will be the leader of that team. He finished second at the Olympics last year to Italian Marcell Jacobs, who came from out of nowhere to capture the gold in Tokyo.

But a glute muscle, and then an abductor muscle, have been bothering the Italian this season, and when a “DNS” — did not start — showed up by his name in the semifinals earlier in the evening, the field began clearing.

That left four Americans — defending world champion Christian Coleman was the other — in the eight-man final for only the second time (2015 was the other) at worlds. They were all among the world’s top nine this season, with only sixth-ranked Akani Simbine of South Africa looming as a threat.

Even so, there was less doubt about the sweep than there was about the order. Fourth-place finisher Oblique Seville of Jamaica was 0.09 seconds behind the medalists.

Kerley overcame the fourth-slowest start but kept closing ground. He was in Lane 4, one lane inside of Bracy, who had a body-length lead on his taller opponent with about 40 meters to go. Kerley closed and powered through the line, while Bracy leaned in at the finish. Bromell was in the photo finish, as well.

“Being out in Lane 8, it was hard to see where everybody was,” Bromell said.

He ended up less than a step behind Kerley. The champion kept running through the finish line and into the first turn. It took about 20 seconds for the result to come up. When it did, he raised his hands, then — in a new twist at these worlds — a presenter ran out and hung the gold medal around his neck. He took it off and held it in his left hand while he completed his victory lap around the rest of the oval — his old distance of 400 meters never felt so sweet.

Other champions crowned were Wang Jianan of China in men’s long jump, Pawel Fajdek of Poland in hammer throw (his fifth world title) and Letesenbet Gidey of Ethiopia in a women’s 10,000. In that race, Sifan Hassan, who won medals in the 1,500, 5,000 and 10,000 in Tokyo last year, finished fourth.