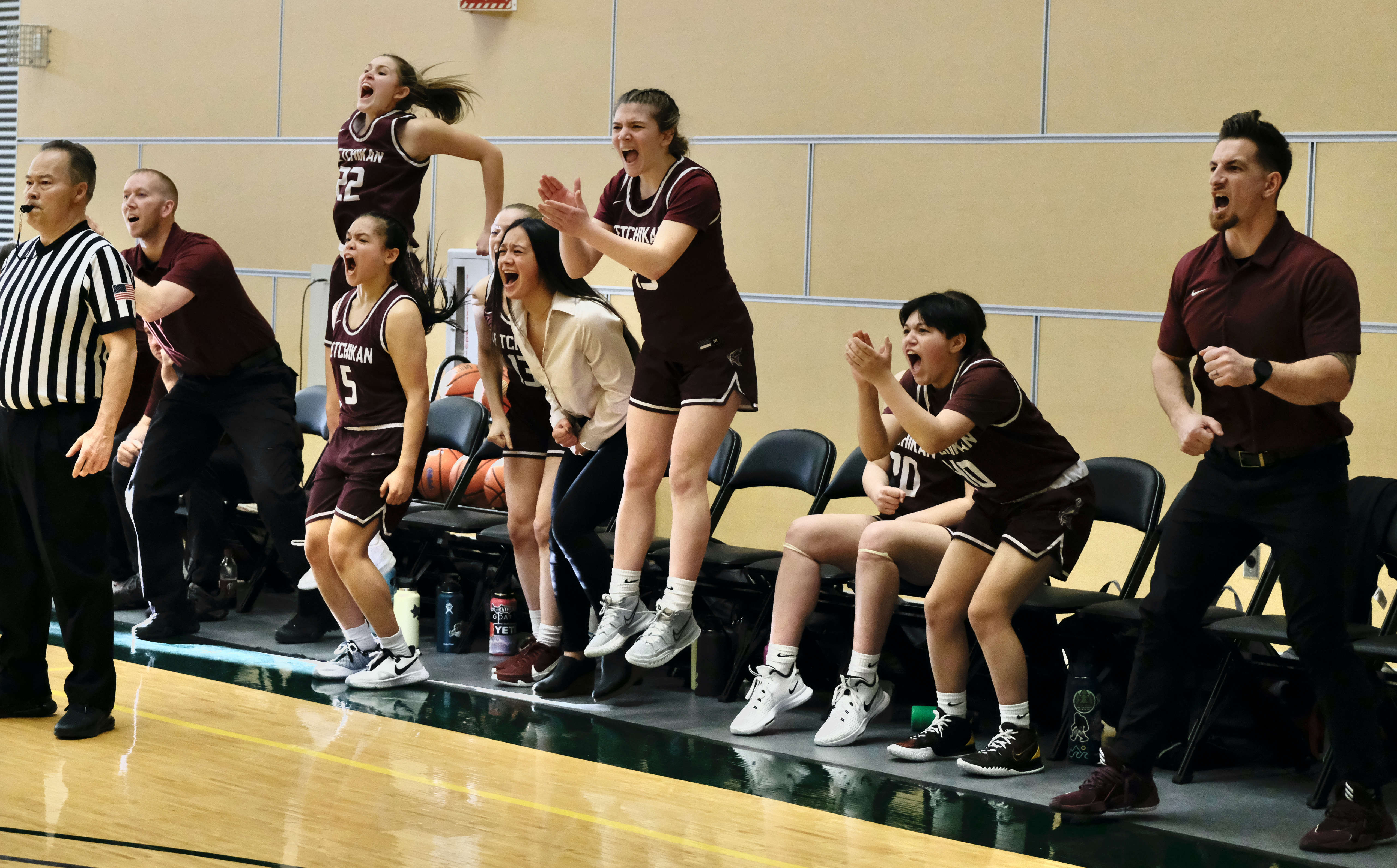 The Ketchikan bench reacts to a made shot during the Lady Kings 56-50 win over the Colony Knights in the state tournament Wednesday. (Klas Stolpe/KINY)

“It was fun,” Ketchikan coach Kelly Smith said. “This is what you come to state basketball for is to play in games like that… it’s hot in here, there are a ton of people, it was loud, it was a lot of fun.”

The fun started with an exchange of baskets through the first quarter with Colony riding five points from sophomore Kaylee Wilkes and Ketchikan getting two shots past the arc from junior Lindsay Byron for a 10-6 Lady Kings lead.

Ketchikan junior Hya Bondoc scored for a 12-10 lead but Colony freshman Alycia Shelley hit from past the arc for a 13-10 Knights lead and Wilkes added a basket and free throw for a 16-12 lead after eight minutes.

Exchanging baskets through the second quarter Ketchikan would tie the game at 21-21 on a power move inside by senior Jenae Rhoads with 3:32 remaining before the half.

Colony struck back with a score by junior Emma Hopkins and Ketchikan’s Byron answered from past the arc for a 26-23 Kayhi lead. Byron added another basket for a 28-23 Lady Kings halftime advantage.

Ketchikan’s Rhoads scored the first basket of the second half for a 30-23 advantage but Colony went on a 10-0 run on baskets by Clark, Hopkins, Wilkes and Clark again for a 33-30 lead.

Kayhi’s Rhoads hit inside and added a free throw to tie the score at 33-33.

Colony’s Clark, and junior Adrian Alley gave the Knights a 36-33 advantage and Clark stole a ball for a score and point 38.

Mendoza hit back-to-back scores, one from inside the arc and one from outside to tie the score at 38-38. Both teams added a basket to go into the final eight minutes tied at 40-40.

The score would be tied two more times until Kayhi sophomore Bree Johnson hit from past the arc for a 47-44 lead half way through the fourth quarter and Mendoza scored for point 49.

Clark answered for Colony and Rhoads for Kayhi for a 51-47 lead.

Byron hit a pair of free throws for a 55-47 lead but Kayhi would miss a trip to the line and Colony’s Wilkes scored past the arc to trail 55-50.

Kayhi’s Rhoads hit one of two free throws with 7.9 seconds remaining to ice the game.

“It would have been nice if we shot 100 percent from the foul line at the end and not made it so nerve wracking,” Smith said. “Colony, they’re a special team, and they’re young, oh my gosh… those two, 22 (Clark) and four (Wilkes), every time I thought we would get a little cushion those two would just bring them right back. I was really proud of my kids… Jenae (Rhoads), Lindsay (Byron) huge inside today… Shae (Mendoza) is a warrior… I though Bree (Johnson) and Hya (Bondoc) and Paige (Boehlert, sr.) came in and made some really big plays.”

Smith noted that Ketchikan used a total team effort in the win.

“That is usually who we are,” he said. “When this is all said and done that’s the one thing we are going to say is that we got to play a game with our friends and we got to do it at the state tournament.”

And now the Lady Kings will play another game with their friends on Friday at 3:15 p.m. in a semifinal against top rated Anchorage Christian, an 84-18 winner over Lathrop. 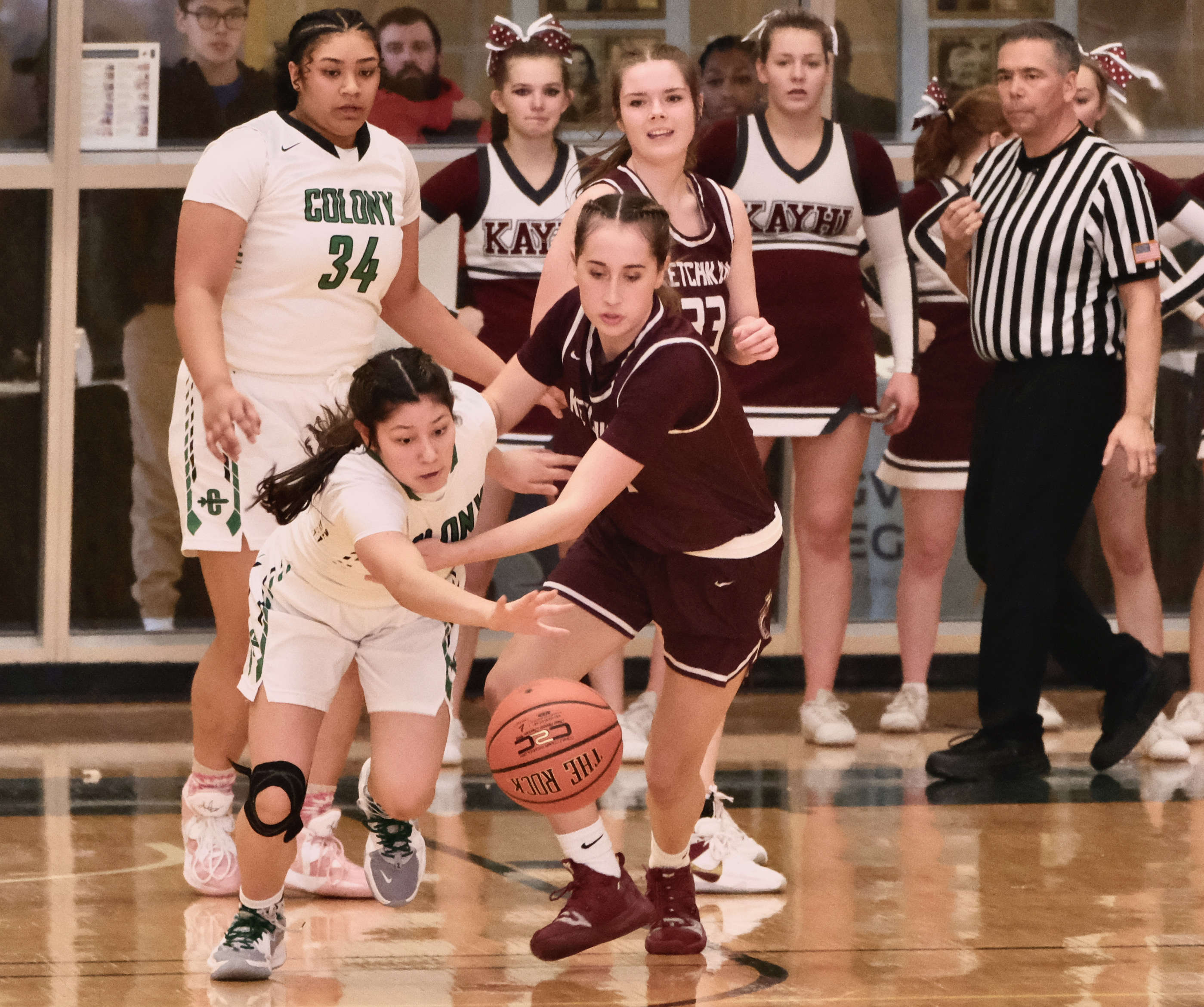 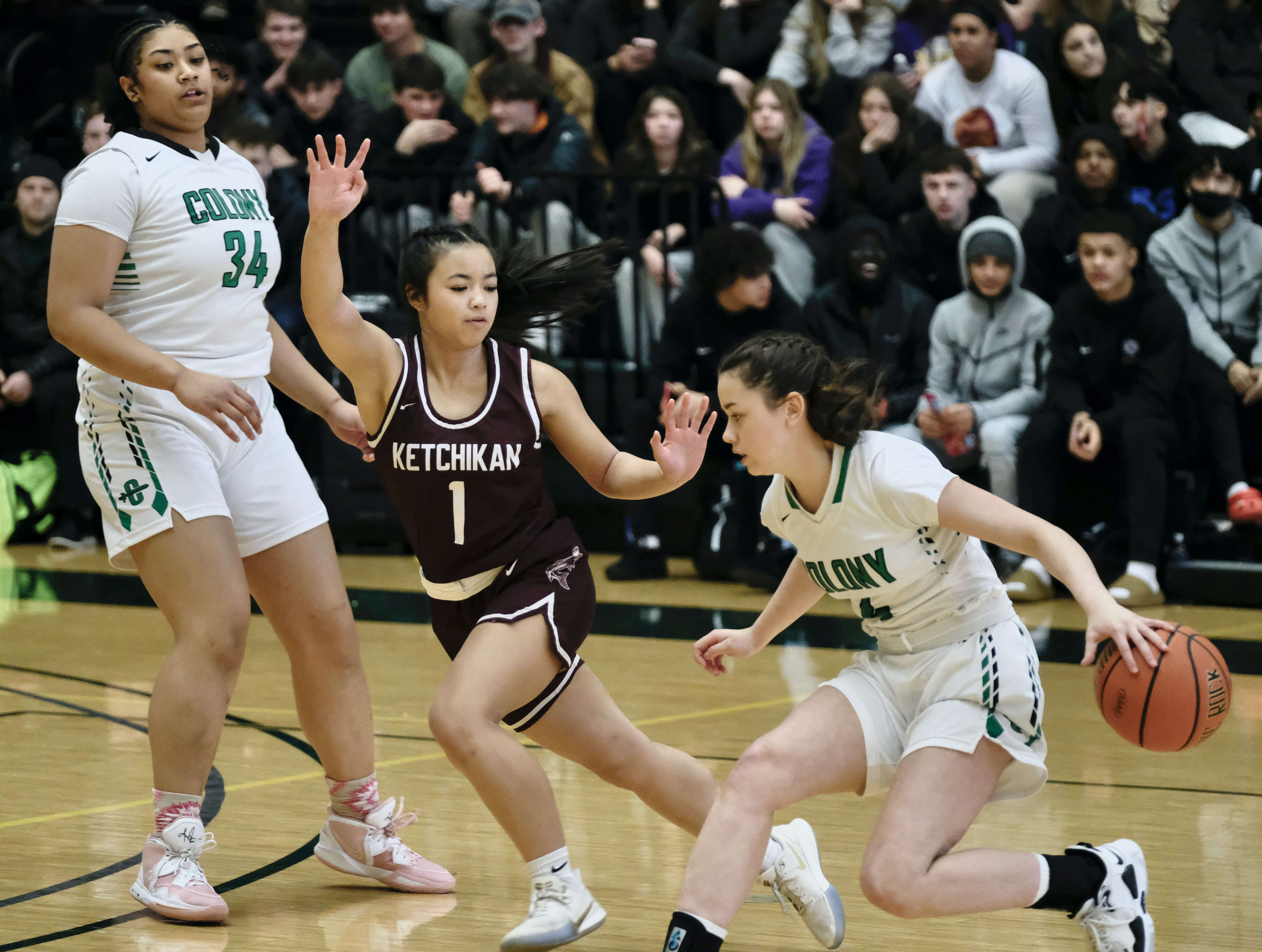