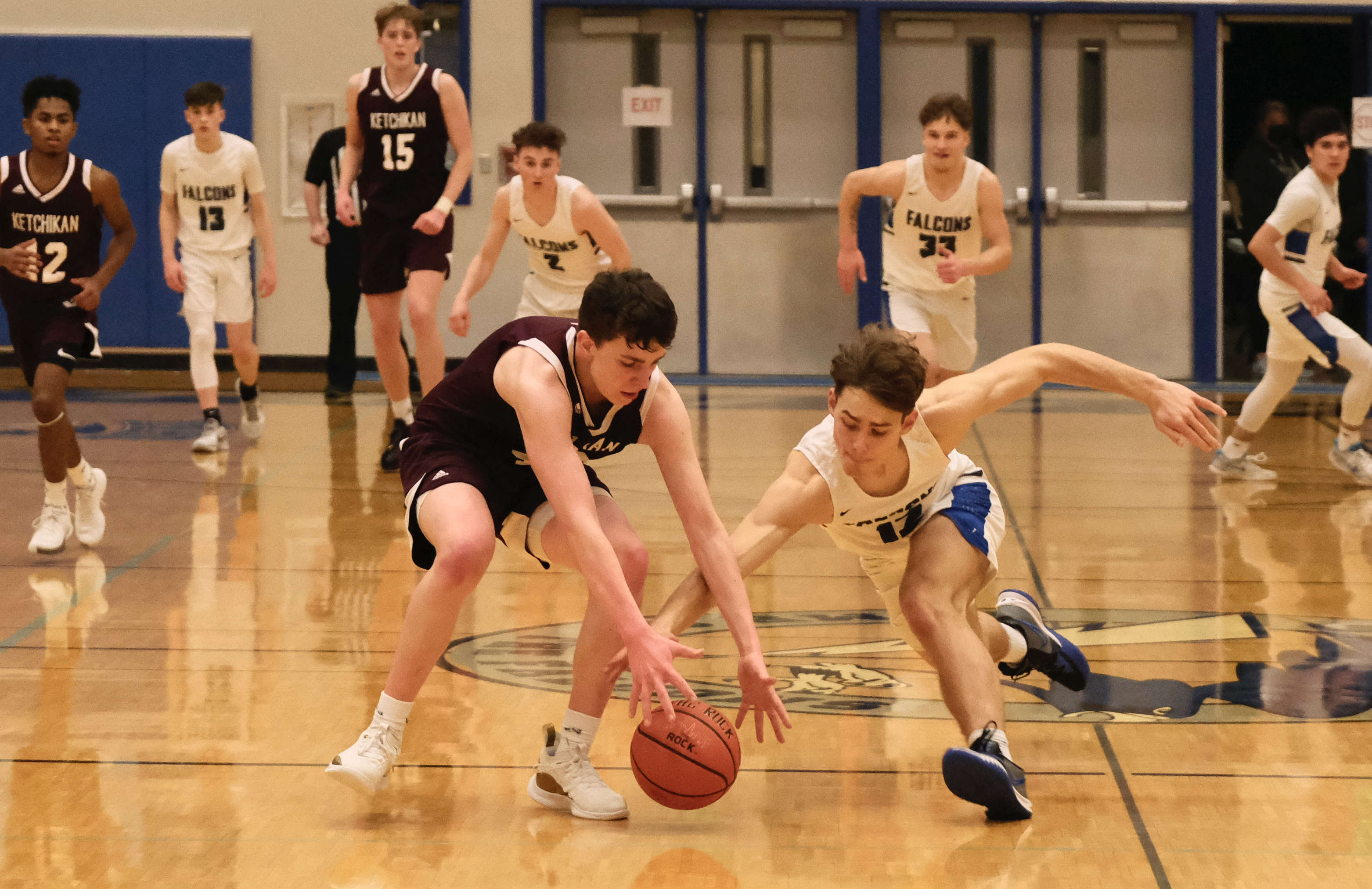 Thunder Mountain senior Wallace Adams (12) steals a ball from Ketchikan freshman Marcus Stockhausen in the fourth quarter of the Falcons 46-43 loss to the Kings in the Thunderdome on Friday, Feb. 18. (Klas Stolpe)

Juneau, Alaska (KINY) - The Thunder Mountain High School boys basketball team were on the verge of completing a fourth quarter comeback win over the visiting Ketchikan Kings in a Southeast Conference game on Friday in the Thunderdome, but a last second shot to force overtime missed and the Falcons fell 46-43.

The Falcons were trailing 44-41 with a minute remaining to play when senior Wallace Adams tipped a ball, dove on the floor for a steal and fed sophomore Thomas Baxter who scored to close within one point, 44-43.

“I don’t know how many times we dove on the floor tonight but I think we dove more times on the floor tonight than we have in any game this season,” TMHS coach John Blasco said. “Which just shows the level of effort they are trying to play with, even when collectively we weren’t all together tonight in sync.”

The Falcons seemed to be in sync on defense, registering just two team fouls in the first half, but needing to foul four times in a row in the last 50 seconds of the game to put the Kings on the line.

Ketchikan senior Josh Rhoads hit two free-throws with 21 seconds left to play in the game for the 46-43 advantage.

TMHS called a timeout with 17.4 seconds left but could not find an open shot. A second timeout by the Falcons with seven seconds left resulted in sophomore Samuel Lockhart fighting through a double team and getting a split-second look from the corner but his shot would not stay inside the rim.

The Falcons had opened the game with a 13-11 first quarter advantage behind Lockhart, Baxter, Adams and senior Isaiah Nelson.

Ketchikan found the three-point line in the second quarter with Rhoads, junior Archie Dundas and junior JJ Parker scoring from distance and junior Joeben Lorenzo getting loose for two baskets.

The Falcons trailed by eight points at the half, 30-22.

When the Kings started the second half they were even more patient on offense, working the ball from side-to-side for nearly two minutes until Dundas hit from past the arc for a 33-22 advantage. It would be the only points of the stanza for Ketchikan.

“It was hard,” Blascon said. “That first possession of the third quarter I think they had the ball for one minute and 18 seconds. We didn’t even see our end of the floor until the 6:30 mark… it’s hard because you spend so much effort defensively and you want to go down and make something happen offensively… you’re not able to recoup and get back some energy and momentum because they are going to have the ball in a long defensive possession. It just kind of takes a toll, it kind of wears you down.”

The Falcons found the energy to score 11 unanswered points. Lockhart hit two free-throws and a short jumper and Baxter hit two shots past the are to tie the score at 33-33 with the fourth quarter remaining.

Baxter scored to start the final stanza for the Falcons and Lorenzo answered for the Kings.

TMHS sophomore James Polasky hit a free-throw for a 36-35 lead but Lorenzo got it back for Ketchikan.

Lockhart drew a crowd on the Falcons next possession and fed junior MJ Tupou for a score and senior Isaiah Nelson hit from past the arc for a 41-37 lead with under four minutes to play.

Ketchikan’s Rhoads, Lorenzo and Parker gave the Kings a 44-41 lead and leaving TMHS having to expend energy to foul four times and get a chance at the last shot.

Ketchikan coach Eric Stockhausen noted the importance of the win for the Kings.

“We figured it out last night that we have only played two games all year with our whole roster,” Stockhausen said. “We had two starters, two main contributors out. Three guys out most of this week for practice. I’m sure every team has their share of injuries but this is, on top with COVID early in the season, has been tough to get everybody together and playing. So to come down here and play a conference opponent, our guys love the Thunder Mountain guys and coach Blasco. It is always good competition, they play very, very hard. I think we used most everybody I brought.. it was a team win for us and a tough road battle.”

“At the end of the day we gave ourselves a chance to tie the game,” TMHS coach Blasco said. “We battled back and tied it up. We just couldn’t quite close out the game. Credit to Kayhi for staying patient, both offensively and defensively… They execute their stuff so well. When we made our runs they stayed stayed collected, they never seemed flustered. That’s a sound team for you.”

TMHS and Ketchikan play at 6:15 p.m. Saturday in the Thunderdome. 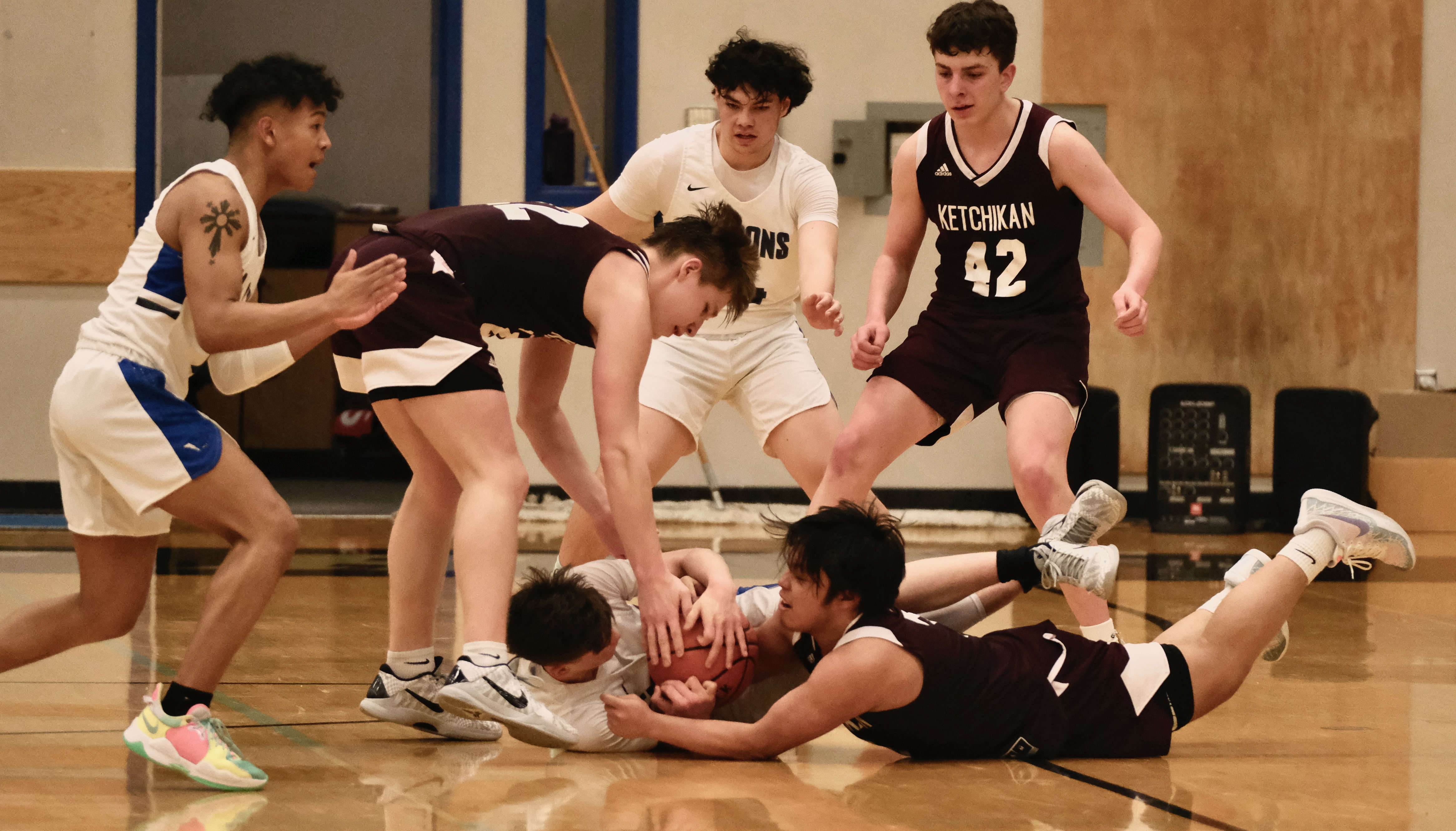