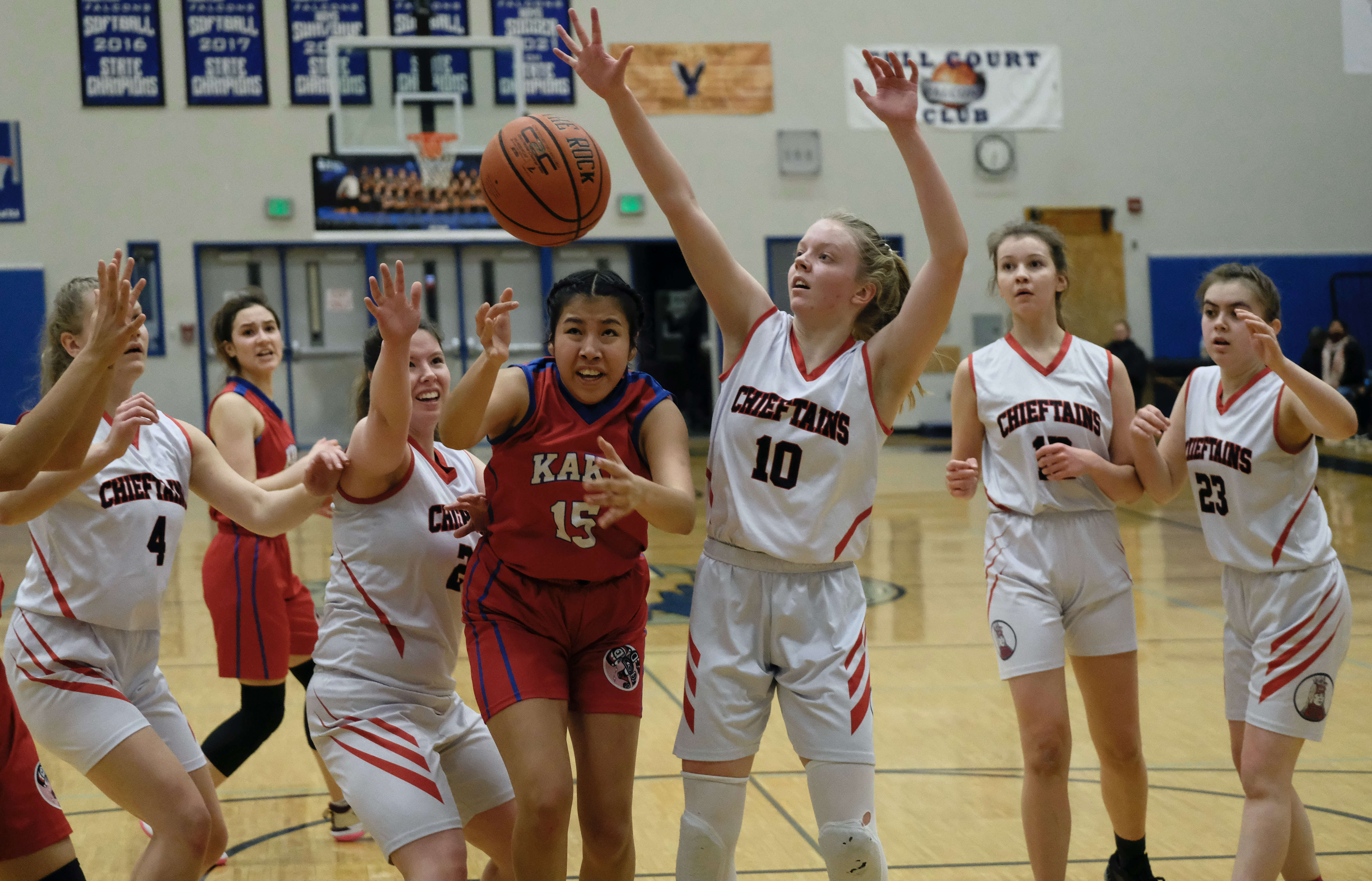 The Klawock Lady Chieftains - shown against Kake in the Region V championship - will play for the state championship against Newhalen, Saturday, at Anchorage's Alaska Airlines Center. (Klas Stolpe/KINY)

Juneau, Alaska (KINY) - Southeast Alaska will be well represented in the championship games of the March Madness Alaska 2022 ASAA/First National Bank Alaska 1A/2A Basketball State Championships on Saturday at Anchorage’s Alaska Airlines Center with the 1A Klawock High School girls, 2A Wrangell girls, and 2A Metlakatla boys playing for titles.

The No.1 seed Wrangell Lady Wolves defeated the No.4 Glennallen Panthers 33-25 in a Friday 2A girls semifinal.

Wrangell faces No.2 Tikigaq for the championship on Saturday.

Wrangell did not shoot a free throw in the game, Glennallen hit 1-2. The Lady Wolves had nine turnovers, the Panthers eight.

The No.3 Metlakatla MisChiefs fell 50-45 to the No.2 Tikigaq Harpooners in the other 2A girls semifinal.

Metlakatla hit 5-16 at the free throw line, Tikigaq 5-8. The MisChiefs had 19 turnovers, the Harpooners 17.

Metlakatla and Glennallen play for third/fifth place on Saturday.

The No.3 Klawock Lady Chieftains defeated the No.2 Lumen Christi Archangels 45-34 in a Friday 1A girls semifinal.

Klawock will face No.1 Newhalen in the 1A championship on Saturday.

Klawock led 12-7 after eight minutes and 20-15 at the half. Lumen Christi led 26-24 after three quarters. Klawock outscored Lumen Christi 21-8 in the final stanza.

In 2A boys, the No.3 Metlakatla Chiefs topped the No.2 Tikigaq Harpooners 78-73 in a Friday semifinal.

Metlakatla will face No.1 Ninilchik in the 2A boys championship on Saturday.

The No.5 Petersburg Vikings won a 2A consolation game over the No.8 Hooper Bay Warriors 61-46.

Petersburg plays in the fourth/sixth place game on Saturday against No.6 Unalaska.

In 1A boys action the No.5 Klawock Chieftains lost to the No.9 Shishmaref Northern Lights 54-48.

The loss eliminates Klawock from the state tournament. Shishmaref plays in the fourth/sixth place game on Saturday.

Klawock opened the game on top 13-9 after eight minutes. The score was tied at 23-23 at the half and Shishmaref led 35-30 after three quarters.

Klawock hit 9-14 at the free throw line, Shishmaref 13-19. The Chieftains had 16 turnovers, the Northern Lights eight.