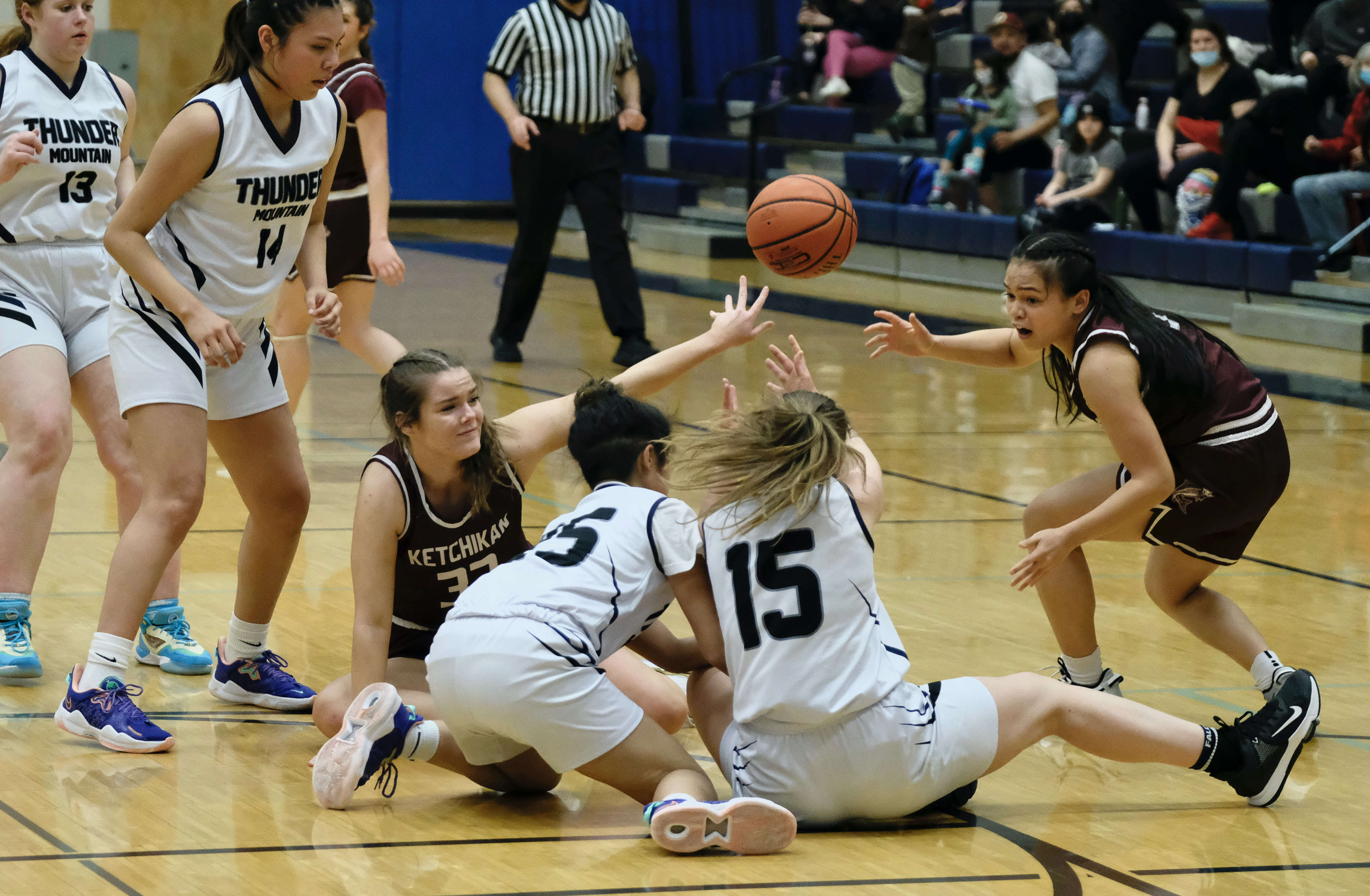 Ketchikan senior Jenae Rhoads (33) and junior Hyacinth Bondoc (5) react to a loose ball with TMHS seniors Jo Pasion (25) and Grace Sikes (15) during the Lady Kings 46-27 win over the Falcons on Friday at the Thunderdome.

Juneau, Alaska (KINY) - There is a simple reason the Ketchikan Lady Kings are undefeated in the Southeast Conference and ranked third in the state. They are good. Kayhi showed how good on Friday in a 46-27 win over Thunder Mountain in the Thunderdome.

Ketchikan improved to 7-0 in the SEC and 19-2 overall. The Falcons are 0-5 SEC and 7-13 OA. Kayhi is ranked third in a state-wide basketball poll behind Anchorage Christian and Wasilla.

Smith noted the Lady Kings have had two weeks off and were overcoming injuries.

“I could tell the mental side wasn’t there,” Smith said. “They wanted to play well so bad and sometimes you get the opposite affect.”

The first quarter was an unexpected calm before the storm as Thunder Mountain scored the first two baskets of the game.

Falcons junior Kiara Kookesh had a steal and scored past the arc and freshman Cailynn Baxter scored on a drive for a 5-0 lead with 5:50 remaining in the stanza. That would be the only lead of the game for the Falcons.

Ketchikan junior Lindsay Byron hit from past the arc and senior Shaelyn Mendoza pilfered the first of her game-high eight steals to tie the score at 5-5.

Both teams registered uncharacteristic turnovers until Mendoza scored at the buzzer and was fouled. Her only mishap of the game was missing the free-throw.

Ketchikan would implement a man press and Mendoza thrived in the second quarter, earning four steals in a 14-0 run that included her 10 points and a basket each from junior Hya Bondoc and senior Jenae Rhoads.

“Shae (Mendoza) was an animal,” Smith said. “I thought Lindsay (Byron) is really showing her athleticism, coming along really nice. We’re just getting Bree (Johnson) back from an injury, she’s trying to get into a rhythm. But all credit to Thunder Mountain, they are long and coach Lee has them working hard. They defend the heck out of the ball. Young teams have a hard time scoring and they are young, but they are going to be fine. But we don’t have that window of being a young team. We have to figure out how to play better by tomorrow.”

The Falcons first point in the second quarter came on a Cailynn Baxter free-throw with two minutes remaining in the stanza and Kookesh picked up a steal seconds later to cut into the Ketchikan lead at 21-10.

Falcons freshman Kerra Baxter scored inside and Lady Kings Byron closed the quarter with a deep shot past the arc for a 24-12 halftime lead.

TMHS would have their best quarter after the break, scoring 11 points including a deep three by senior Jo Pasion, a Kookesh put-back, another deep shot by Kookesh and a basket and foul shot by C. Baxter.

The intensity by both teams did not drop off in the final stanza but the scoring did as the Lady Kings notched five points and the Falcons four.

“Their veteran strength matches our inexperienced weaknesses,” TMHS coach Andy Lee said. “We have to learn to be fearless until we gain the courage that comes with confidence. I love our fight. We have a lot of quarters left.”

“I coached this way different than I would a month ago if we had a 20 point lead,” Ketchikan coach Smith said. “We would have kept going and moving… tonight now the scenarios are ‘what are we going to need at the region tournament, what are we going to need at the state tournament.’ You know, when you are not up 20. One of the goals we had was to have a lead and be able to kill three minutes without a turnover. I’m not sure we did that but it is stuff we are working on.”

Thunder Mountain will host Ketchikan again on Saturday at 6 p.m. The game will be preceded by C-team and JV action. TMHS will honor their senior players, pep band members and cheerleaders before the start of the varsity game. 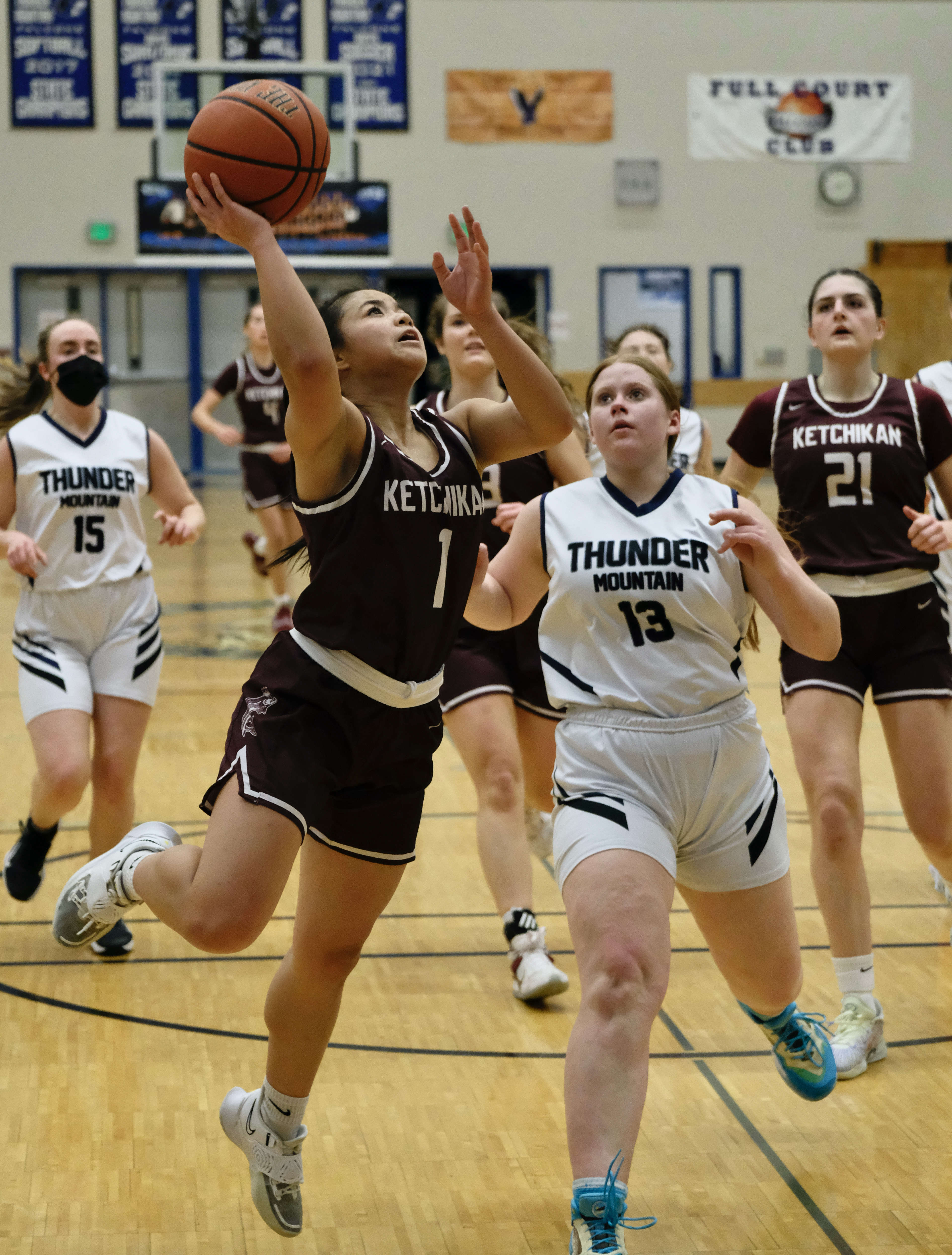 Above - Ketchikan High School senior Shaelyn Mendoza (1) scores after a steal as Thunder Mountain seniors Grace Sikes (15) and Sydney Strong (13) and Kayhi senior Jenae Rhoads (33) and junior Lindsay Byron (21) follow during the Lady Kings 46-27 win over the Falcons on Friday, Feb. 25, 2022 at the Thunderdome in Juneau. (Klas Stolpe / KINY). 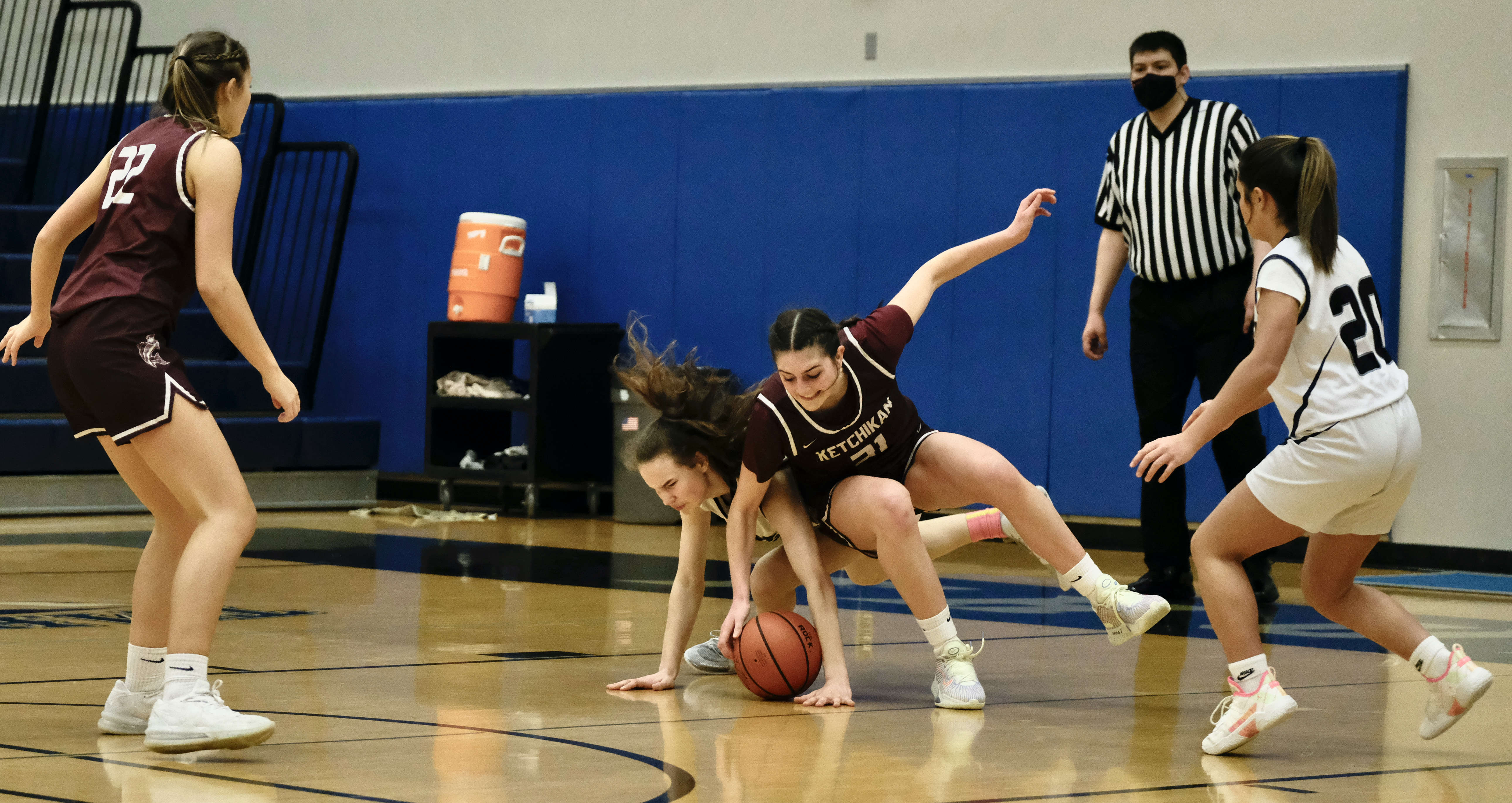 Above - TMHS freshman Cailynn Baxter and Ketchikan junior Lindsay Byron react to a loose ball as Lady Kings senior Gabby Mas (22) looks on in the Falcons 46-27 loss on Friday. 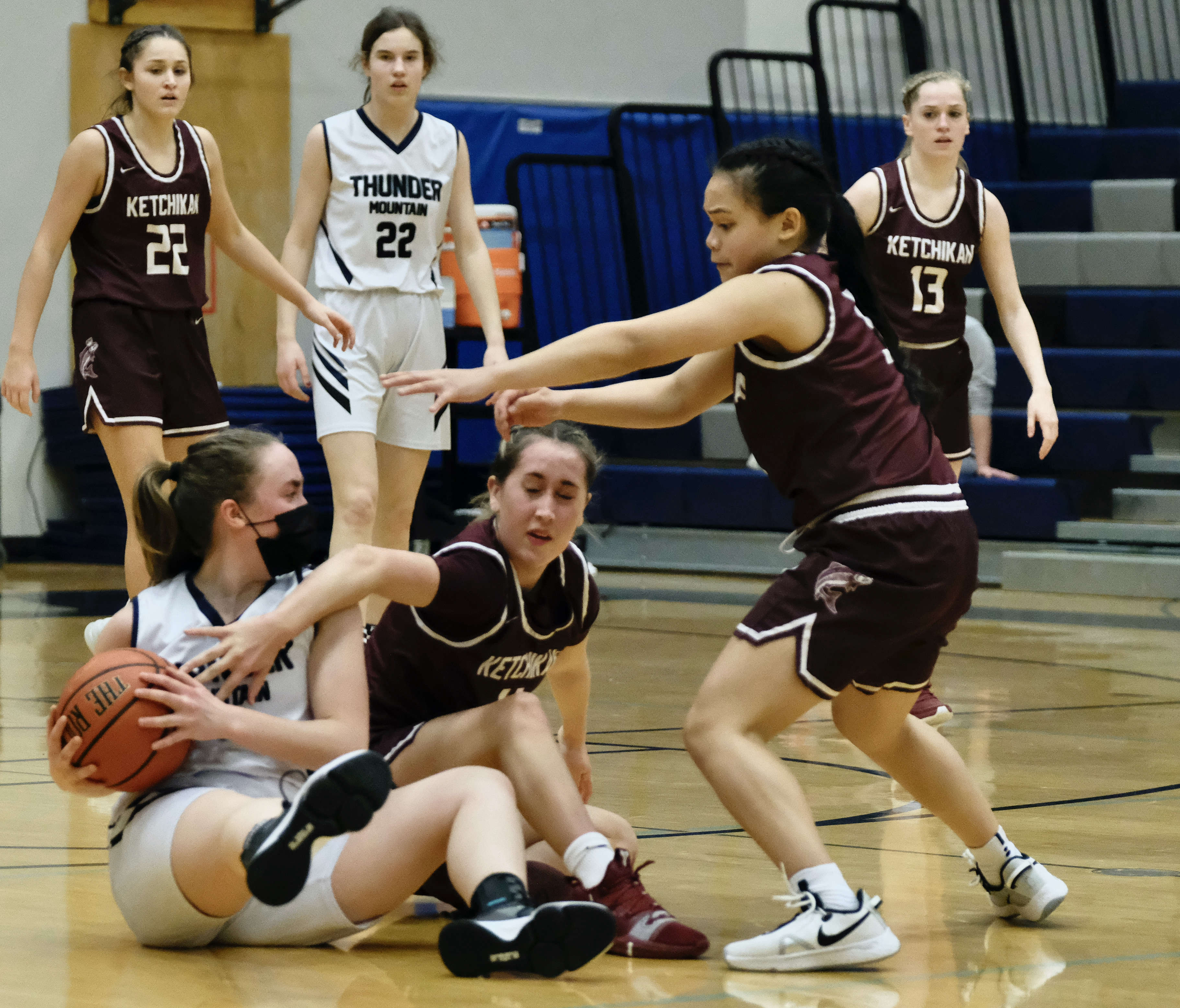 Above - TMHS senior Grace Sikes wrestles a loose ball from Kayhi sophomore Bree Johnson and junior Hyacinth Bondoc during the Falcons 46-27 loss to the Lady Kings on Friday at the Thunderdome. (Klas Stolpe / KINY)