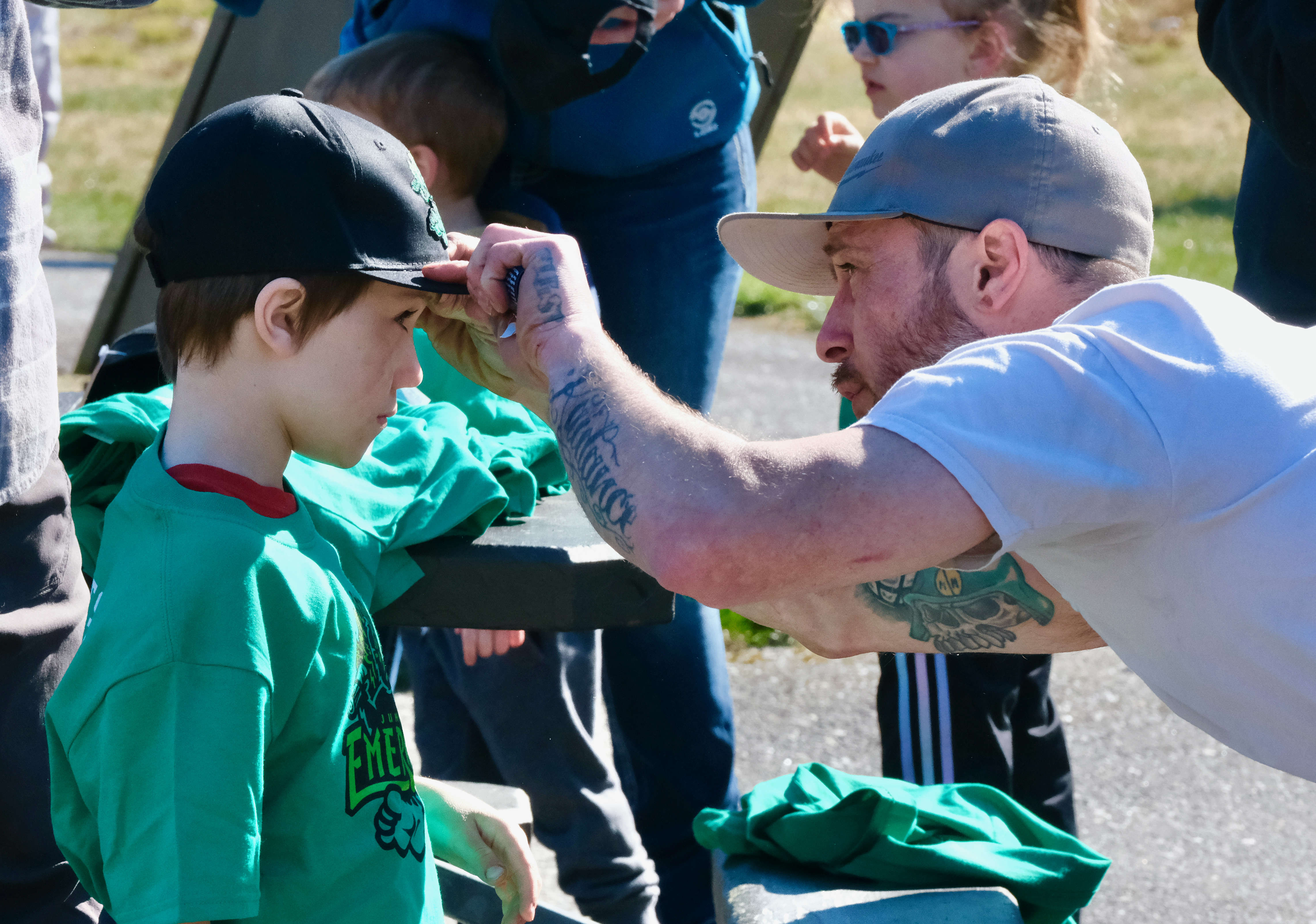 Juneau, Alaska (KINY) - Their names are not on the back of their uniforms, their coaches drive them to and from practice, their parents still dress some of them and they have sleep-overs with the opposition. But the gathering of athletes at Saturday’s Gastineau Channel Little League Opening Day ceremonies were there for one reason, the love of the game.

“I like hitting,” six-year-old Ryder Anaya said after his father, Mike, adjusted his green Emeralds hat so it wouldn’t fall over his ears and eyes. “I like home runs.”

Over 400 softball and baseball players from ages four to 16 took part in Saturday’s activities, the league’s first since the COVID-19 pandemic began.

They ran onto the Adair Kennedy Field through high fives, and some a bit lower, from the Juneau-Douglas High School: Yadaa.at Kalé Crimson Bears baseball team and the Thunder Mountain High School Falcons softball team.

With players forming a large arch from first base to third, activities began with an opening invocation prayer from Tim Mearig inviting and welcoming a higher presence to the field and through the season.

“… Wow, look at all these children out here,” Mearig said. “With your favor Lord rest on them during this season… we know that baseball, like in life, can be full of ups and downs…”

Kirsch led the attending crowd in the volunteers’, coaches’ and parents’ pledge.

That was followed by White Sox baseball players Josh Beedle, age 12, and Callen Walker, 12, and the Grasshoppers’ Zack Ritter, 9, joining softball players Taylor Petrie, 13, of the Comets, the Wildcats’ Victoria Petrie, 10, and the Ladybugs’ Millie Mar, 7, in reciting the Little League Pledge.

“It’s an honor to do it,” Karpstein said. “With all the years I have been doing it, I have been enjoying it.

Karpstein has been part of 51 opening days as a Little League volunteer. He said one of the biggest changes he has seen is the players becoming more knowledgeable on how to play the game, but the enthusiasm has never wavered.

“From the tee-ballers up,” he said. “It is really fun to watch the tee-ballers on opening day, the first time they run down the gauntlet line. That’s a big thing to them…”

Karpstein began his volunteer duties in Little League as an umpire in Sitka in 1972.

He moved to Juneau, and the GCLL, in 1977. During the 1980s and 1990s, Karpstein served as an assistant district adminstrator for District 2 and as chief umpire for District 2. He has been on the GCLL Board of Directors since 2004 as chief umpire. From 2014 through 2020, Karpstein was president. In October 2020, he was made a “lifetime honorary member” and continues to volunteer.

As a matter of fact, during Friday’s high school game between JDHS and Sitka he was struck with a ground ball while base umpire.

“It felt really cool,” McGuan said, and added: “I hope we win the championship.”

“I feel really honored, honestly,” Adair said. “I’ve been coming to this every year as a player and now as a coach for several years… it’s an honor. I feel really special… It’s softball, it’s summer, the sky is blue, it’s time to play ball…”

Born and raised in Juneau, she is the granddaughter of police officer Richard James Adair, who was killed in the line of duty along with Jimmy Earl Kennedy and for whom the Adair-Kennedy Memorial Park is named. Nicole Adair’s career began with GCLL tee ball at age six. She went on to the Midnight Suns, JDHS and to Shasta College in Redding, California. She noted her influential coaches included Dave Massey, Glen Alt, Tim Adair (her dad), Kari Monagle (JDHS head coach), and Sunny Stupek (her college coach).

She has supported her eldest daughter through softball by managing Midnight Suns 10U, 12U, 14U, 15U, GCLL Minors and Majors, and is currently a JDHS Softball assistant coach. She is now starting all over and coaching with her youngest daughter’s softball team. In 2017 she was presented with the Western Region Award for “the manager who best exemplifies the spirit of little league” by Cedar National Little League Softball

Team Wild 13-year-old player Lily Hayes was in a battle with the ceremonial first softball pitch, which kissed the dirt on its path to the plate.

“I was kind of nervous,” Hayes said. “I wasn’t really ready for it to roll.”

Hayes said she hopes to get good hits this season and likes “getting to get dirty.” 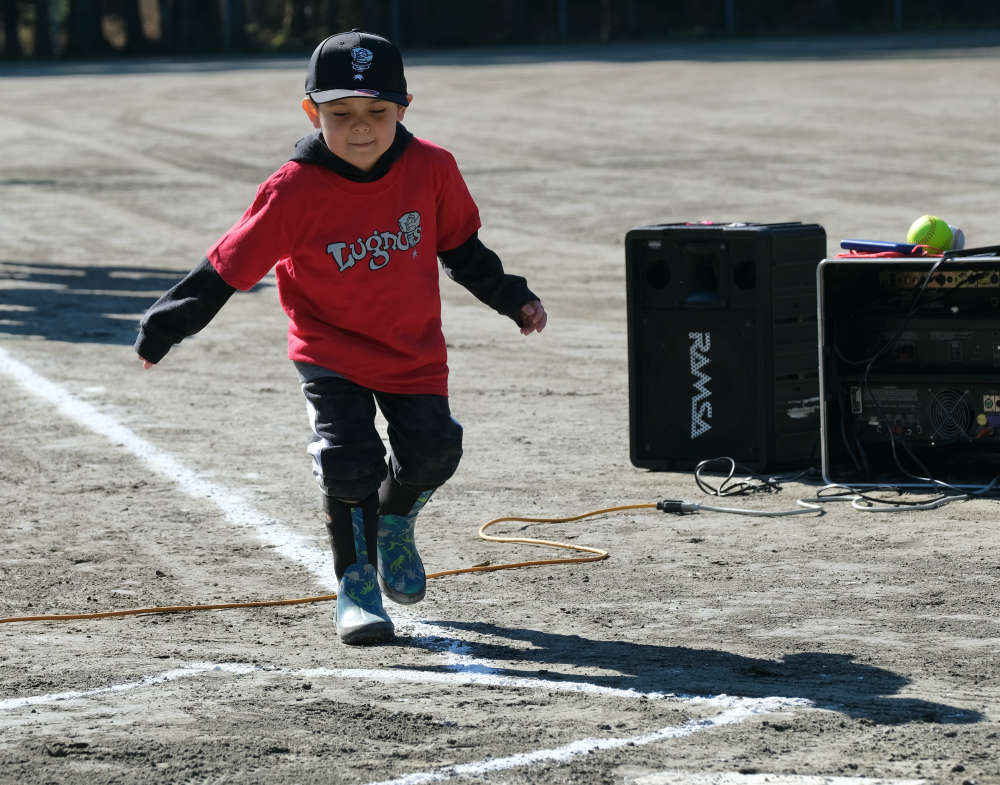