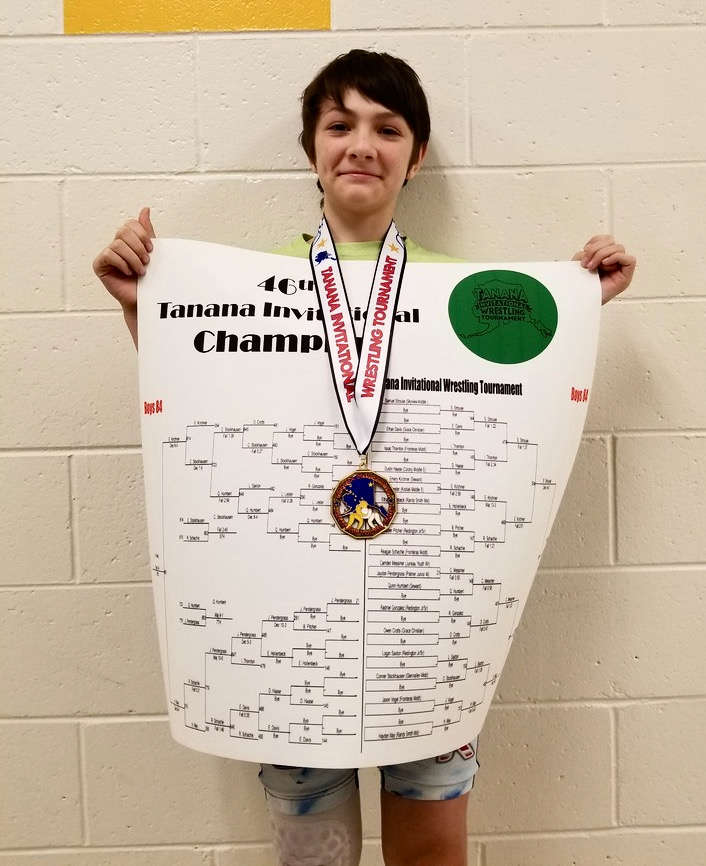 “It was definitely a different experience from wrestling here in Juneau,” Messmer said. “In Juneau I am wrestling my friends and it is not necessarily a challenge for me. But going up to state and going against someone with better skill and different people was a challenge.”

Messmer posted a tournament record of five wins and no losses in his 84-pound bracket and scored 34 team points. He pinned Skyview Middle School’s Samuel Strouse in the second period of their title match.

Messmer said he was nervous but confident.

“I don’t really remember that much about my matches,” he said. “I went in with the mindset of wanting to win.”

Messmer said he was trailed 8-6 when he used a head-and-arm to pin Strouse.

“He was a little bit stronger than me,” Messmer said. “He was an eighth grader so he had a little bit more experience, I think… We were tied up and he put a little bit of pressure on me, I don’t know, I just had the opportunity so I took it. It was definitely an experience but I was just happy to stand on the podium with my bracket.”

“Camden is a very tenacious wrestler,” Cummins said. “He kept the pressure on the kid and then was able to catch him and get the pin.”

The tournament was held at Tanana Middle School and is considered the state tournament for youth wrestlers. There were over 400 male wrestlers and, for the first time, over 100 girls.

“We’ve kind of gotten up there before but not with this few of kids,” JYWC co-coach Ken Brown said. “We were pretty proud of the boys.”

“We did really good,” Cummins said. “We had half or less than half the number of people than the bigger teams had.”

Sitka eighth grader Emmit Johnson traveled with the JYWC and placed second at 160 pounds, losing in the championship by pin to Seward’s Colton Barlow. Johnson posted a tournament record of 5-1 and scored 30 team points.

“He was actually leading in the finals when he got pinned,” Cummins said. “He beat the No. 1 seed in the semifinals and lost to the No. 2 kid in the finals."

“She had to go against the No. 1 seed in the semifinals,” Cummins said. “It was a close match and Nixie was just putting her onto her back when the time ran out. Another five seconds and Nixie would have won that match by pinning that girl and been in the finals.”

Floyd Dryden eight grader Gunnar Niere placed third at 105 pounds, winning by pin over Chief Ivan Blunka’s Elden Andrew in the first period. Niere had a record of 7-1 in the tournament and scored 28.5 team points.

Floyd Dryden eight graders Eli Harvey (114 pounds) and Noah Ault (114), both champions at a recent tournament in Ketchikan, were unable to travel to state.

“I was especially impressed with Damian Marvin and Landry Dillingham, who wrestled their first official matches and won against veteran wrestlers,” Cummins said. “Damian finished sixth and medaled in a tough weight class and Landry won a couple of matches against seasoned competition. We coaches were just really happy with all of our wrestlers' hard work at the tournament. We took a fairly young team up there with a bunch of first-year wrestlers and out of the 16 kids we brought up 14 won matches. For us to take up a group of kids that are pretty inexperienced and do as well as we did was eye opening for the up north teams.”

Above - Middle School wrestlers gather at the Tanana Invitational Wrestling Tournament in Fairbanks. 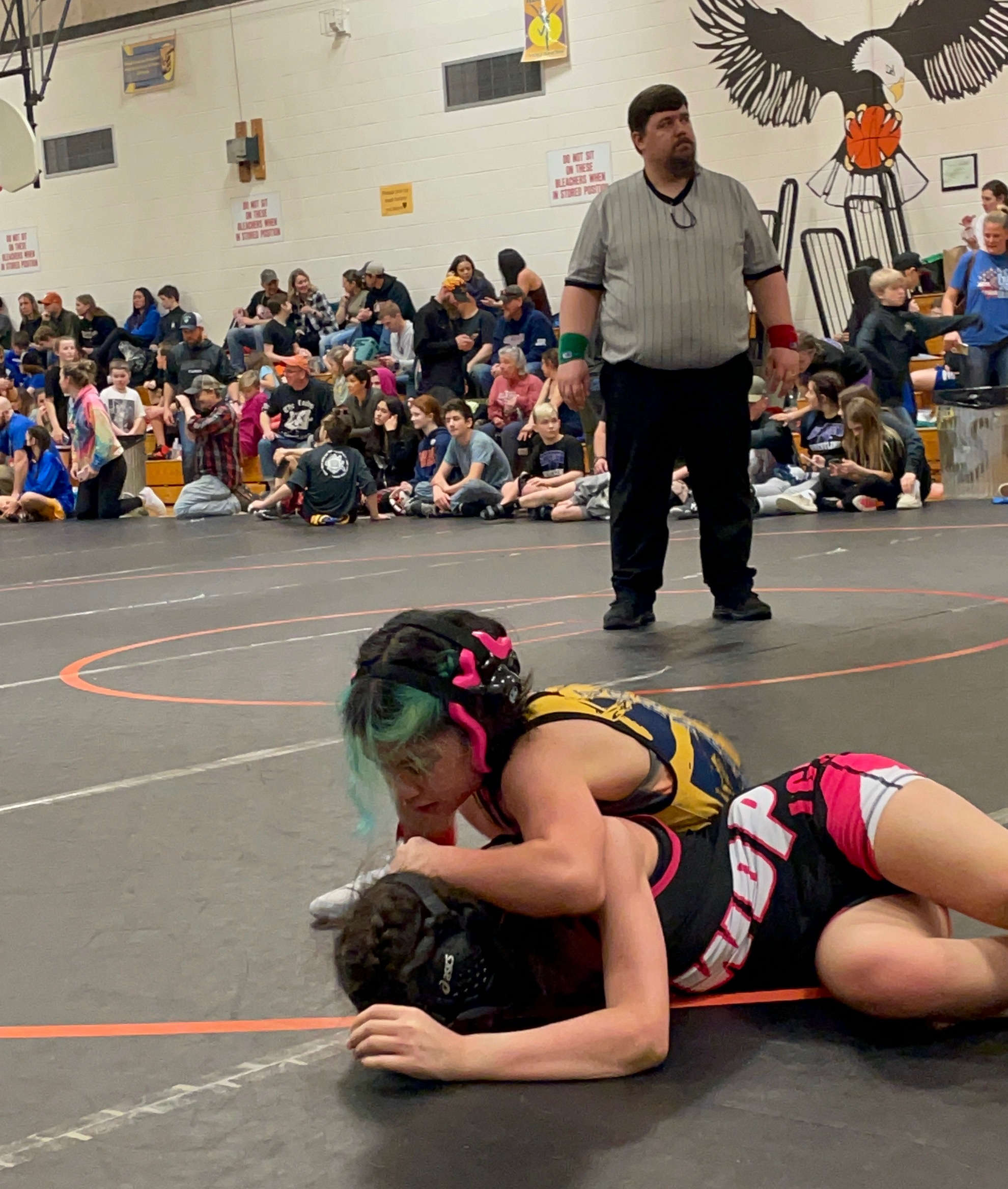 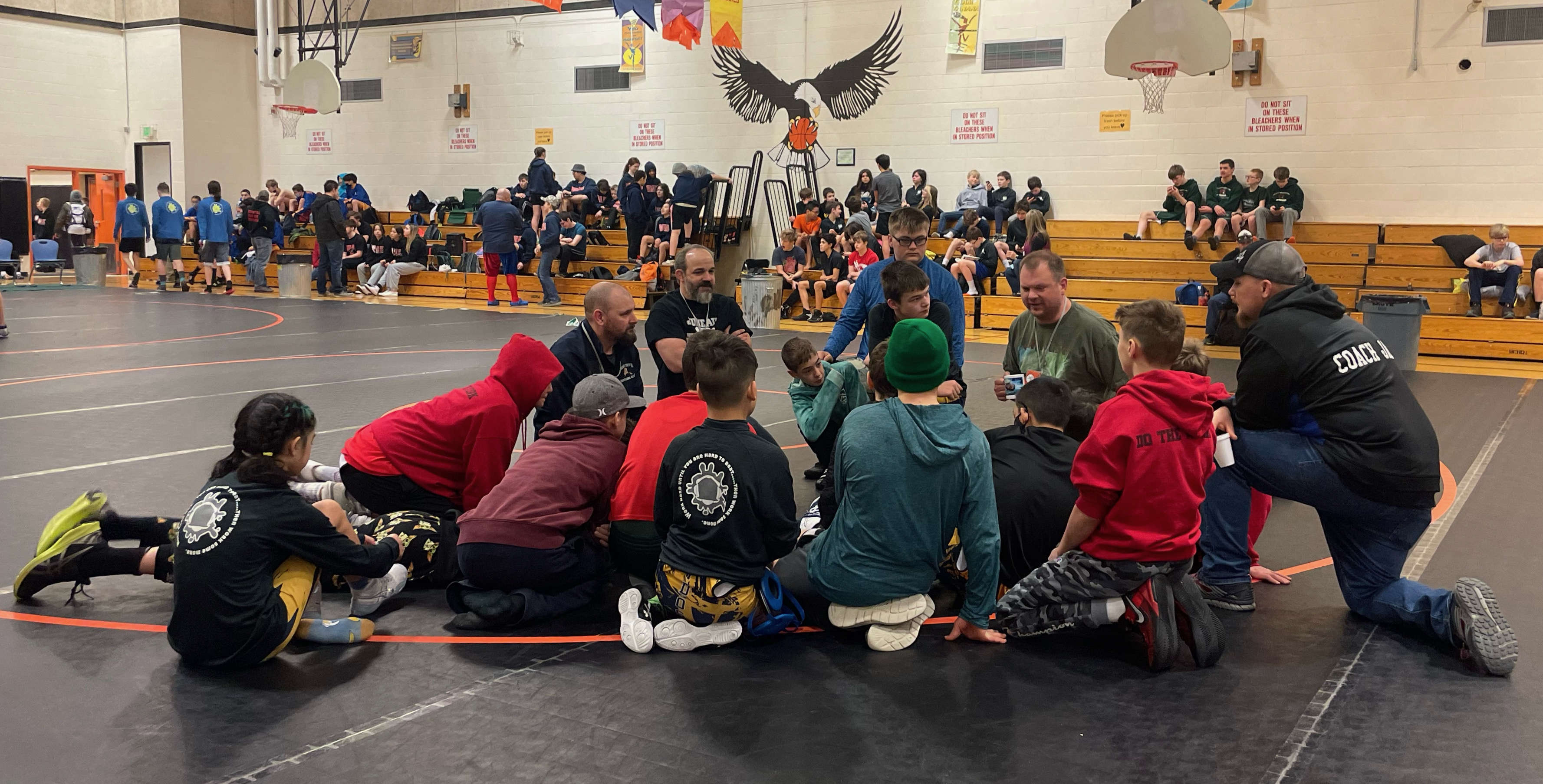 Above - The Juneau Youth Wrestling Club Tornados meet on the mat at the Tanana Invitational Wrestling Tournament in Fairbanks.