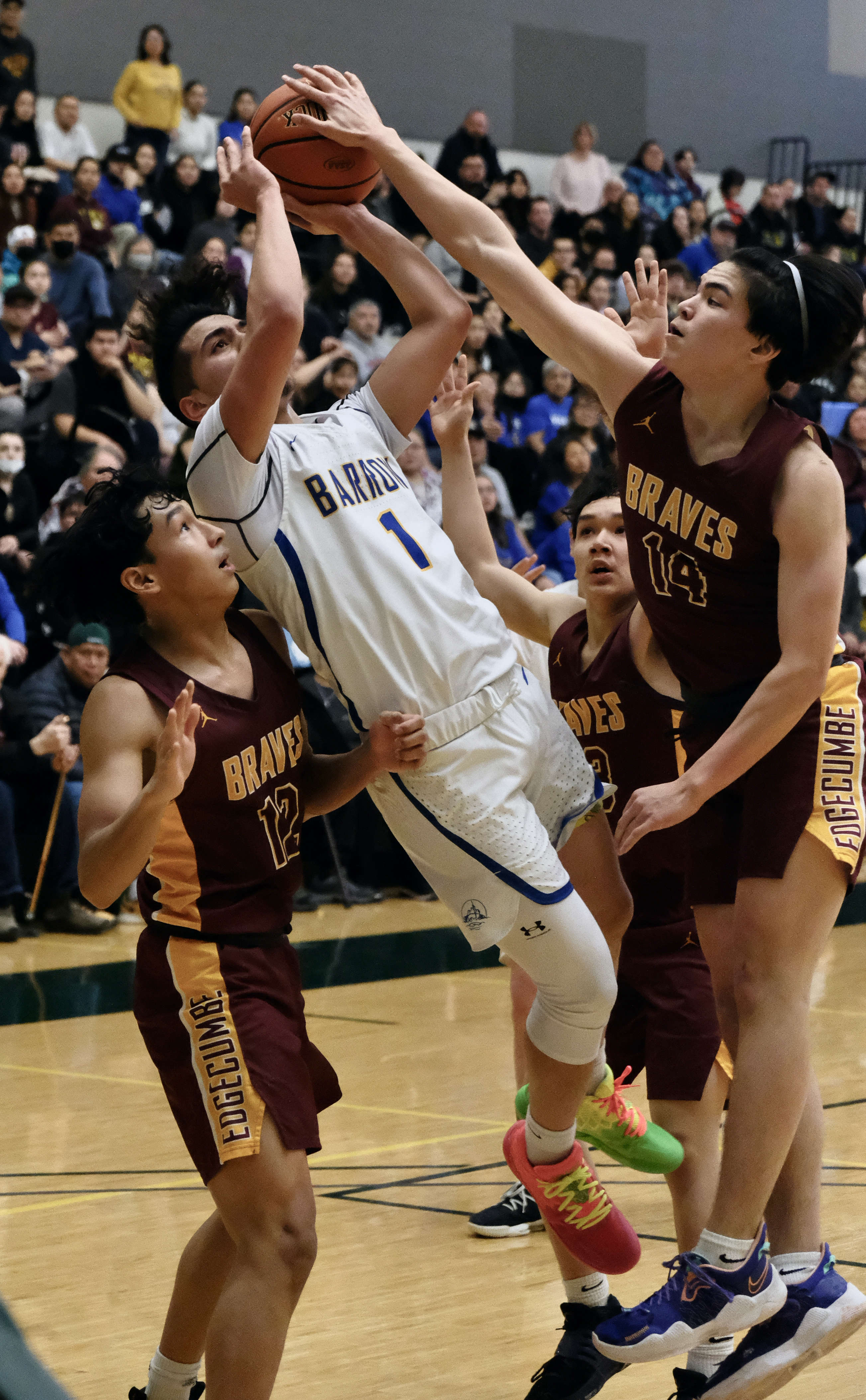 Mt. Edgecumbe's Connor Journey (14) blocks a shot by Barrow's Loia Dias (1) in the Braves 63-60 win over the Whalers for fourth place at the state tournament, Friday, in Anchorage. (Klas Stolpe/KINY)

“Oh, I wasn’t calm at all,” Mt. Edgecumbe coach Archie Young said. “It was a very fun game to coach. I wouldn’t have it any other way. It was a close game from start to finish and that was fun for the kids to play. It was uptempo. We tried to press a lot; they started to. It just makes it more fun to play and it puts guys in position where they have to play hard. It was just a great game to come down to the very end. Those are always fun to be part of.”

After 24 minutes of action, the teams started the fourth quarter tied at 46-46.

Mt. Edgecumbe sophomore Kaison Herrmann (of Kolifanek) opened the final quarter with a score and was answered by Barrow sophomore Uatahouse “Uata” Tuifua on a rebound putback for 48-48.

MEHS junior Mason Ivanoff (Unalakleet) hit from the arc and the Braves pressed getting two steals and back-to-back baskets by Herrmann for a 55-48 lead.

Ivanoff and Wassillie (Wasilla) went inside on the next two possessions, working the glass for two scores and a 63-52 advantage with three minutes left to play.

Barrow freshman Ethan Goodwin hit a shot and the Whalers picked up their pressure another notch, forcing a turnover and getting two free throws from junior Loia Dias to trail 63-56.

Mt. Edgecumbe committed two turnovers and Barrow’s Tuifua scored on one for the Whalers' 58th point.

MEHS’ Ivanoff worked inside and drew the fourth foul on Barrow’s Tuifua but could not hit the front end of his efforts.

MEHS' Wassillie worked inside and drew the fifth foul on Tuifua, sending the Whalers' big man to the bench, but again the iron was unkind on the free throw attempt.

Barrow missed a shot and MEHS’ Ivanoff rebounded and was fouled with 8.9 seconds left. Ivanoff missed the front end and Barrow could not get a good look for a final shot and the Braves celebrated their fourth place finish.

In the locker room, Young talked about finishing games and the season.

“I’ll keep this short and sweet for you guys,” Young told his players. “We talked about finishing right and I feel like we did that. That’s something we talk about when we run every day - finishing right, finishing right, finishing right, and it is more than just diving on the floor. There were a lot of plays today, especially the charges, when we were playing right tonight. The nice thing I am really proud of as far as the Player of the Game thing goes is that it went to someone different every game… No matter what happened in this game mom and dad are going to love you, hug you, and tell you how proud they are because you just took fourth place. You own your last game. There are only a few teams that can say they won their last game of the year… It was a very trying year in a lot of ways, just different things going on. What did we have? Maybe seven days of practice with everybody together? There were a lot of things that made this a challenging season but we are still here right now and we still played this game, we won our last game of the season. I hope that is something, not just the win, you hold your heads up high… we went through a lot this season and I am proud of you for that… the bottom line is I am proud of you guys and I’m glad we won our last game… huddle up, get changed, go enjoy your families…”

There were seven lead changes in the first quarter with Barrow taking a 14-13 lead after eight minutes of action.

Another three lead changes in the second quarter ended with MEHS’ Wassillie tying the game at 21-21, Barrow’s Dias getting fouled on a made shot and hitting the free throw and Wassillie trying the game at 24-24 with a shot past the arc to end the first half.

MEHS pressured to start the second half and Herrmann scored inside for two and outside for three and Armstrong hit from past the arc as the Braves converted on three steals.

After Barrow senior Jeremiah Goodwin scored for the Whalers, MEHS’ Wassillie put in two shots for a 35-26 Braves lead.

The Whalers got two buckets on their press including a shot past the arc by sophomore Sasita "Sika" Unutoa and a steal and layup by Dias to close to five, 38-33.

MEHS sophomore Jacob Friske (Sitka) stepped off the bench and put the Braves up 40-33.

Dias answered past the arc for the Whalers and Friske fired right back from the other arc for the Braves and a 43-36 advantage.

Barrow closed out the third quarter capitalizing on three MEHS turnovers as Jeremiah Goodwin scored with 1:16 remaining and junior Aaron Stackhouse hit two buckets in the key to tie the game at 46-46 with one quarter left to play. 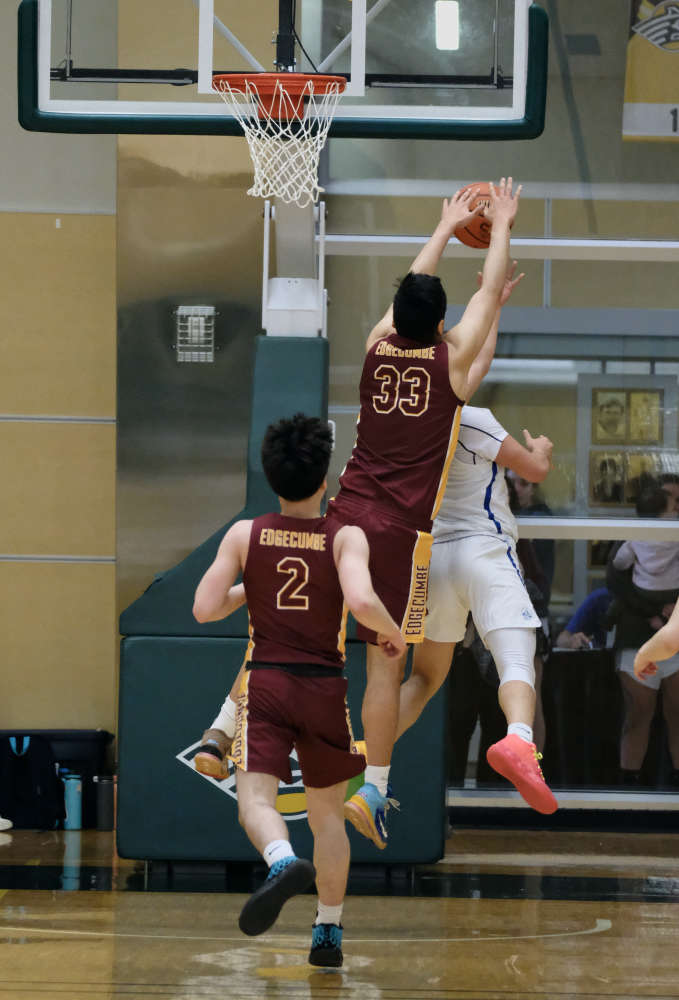