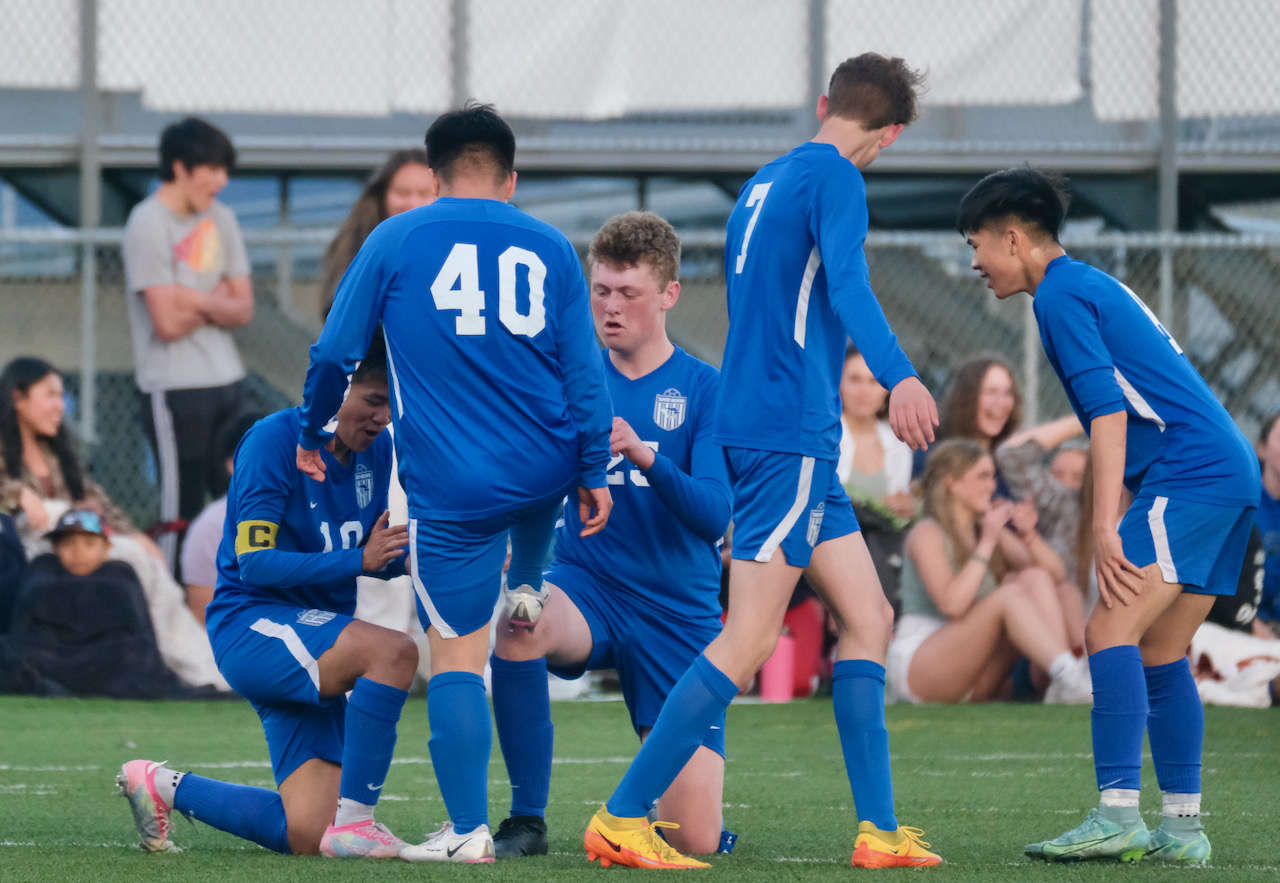 TMHS' Omar Alvarez (40) has his spikes shined by Phillip Lam (10) and Jaden White (25) as Darin Tingey (7) and Preston Lam look on during their senior night win over Ketchikan, Saturday, at TMHS. (Klas Stolpe/KINY)

The first came in the 39th minute of the first half.

TMHS senior Phillip Lam hit a corner kick into the Kayhi box, classmate Jaden White headed it to the turf and classmate Wallace Adams touched it to Alvarez, who booted it in for a 1-0 Falcons advantage.

“That first goal… it felt like a dream honestly,” Alvarez said. “I didn’t think I did that but I did. And came second half I was like, ‘Man, I need one more, I want one more.’ And it looks like I got three more, so, it was amazing…”

In the second half, Alvarez took a penalty kick in the 73rd minute of the match and scored for a 2-0 lead.

His third goal came on another Lam corner kick that again found White’s head, landed in a cluster of players and was left-footed in by Alvarez in the 74th minute.

His fourth goal was a thru ball that Alvarez pursued from midfield while being marked by a Kayhi defender. Both players arrived at the ball as the Kayhi keeper closed out, but Alvarez put his left cleat into the ball for the most dramatic scoring celebration of the season.

Alvarez sprinted with teammates toward the home crowd, was stopped by classmates Lam and White who knelt before him and in a Ronaldo-like honor, “shined” his shoes. Whether his celebrations were Ronaldo-like - jumping into a pirouette, landing with arms thrusting down and yelling “Siuu” (yes), or like current Brazilian Neymar or old school Brazilian style per Renaldo (Nehemiah), they all enticed a frenzy from the students in attendance.

“I have always wanted to do the Ronaldo one,” Alvarez said.

Lam hit the Falcons’ fifth goal from about 20 yards out as both he and Kayhi’s keeper charged for the ball in the 79th minute. Lam reached it first and the backpedaling goalkeeper was left hung out for a shot that went over his head and into the netting for the 5-0 final.

A clean sheet that Ketchikan attempted to dirty six times in the first half, twice stymied on free kicks by the Falcons wall and four times hampered by the presence in the box of senior keeper Miles Peterson.

“I feel great,” Peterson said. “It is always the goal to get a clean sheet so I just had to show out on my last game, my last home game. I’ve put four years into this program. I’ve had my sophomore year taken away from me. I’ve only started two years, my junior and senior year…”

Peterson was interrupted by a loud cheer from his teammates who yelled, “best keeper in the state!”

They spoke as a group after the match saying, “We’re a team, Omar scored those goals, that just proves that anyone on this team can score and we all do it together… it’s a team effort… senior night is something we have always dreamed of since we came into this program and now that we are in it, it’s amazing… we’re a family, it’s a good way to end on our home pitch…”

Next up for the Falcons is an at-large bid to the 2022 ASAA/First National Bank Alaska Soccer State Championships May 26-28 at Eagle River, Service and West Anchorage High Schools. Juneau-Douglas High School: Yadaa.at Kalé has clinched the Southeast Conference berth and TMHS and Ketchikan are in line for an at-large qualification. 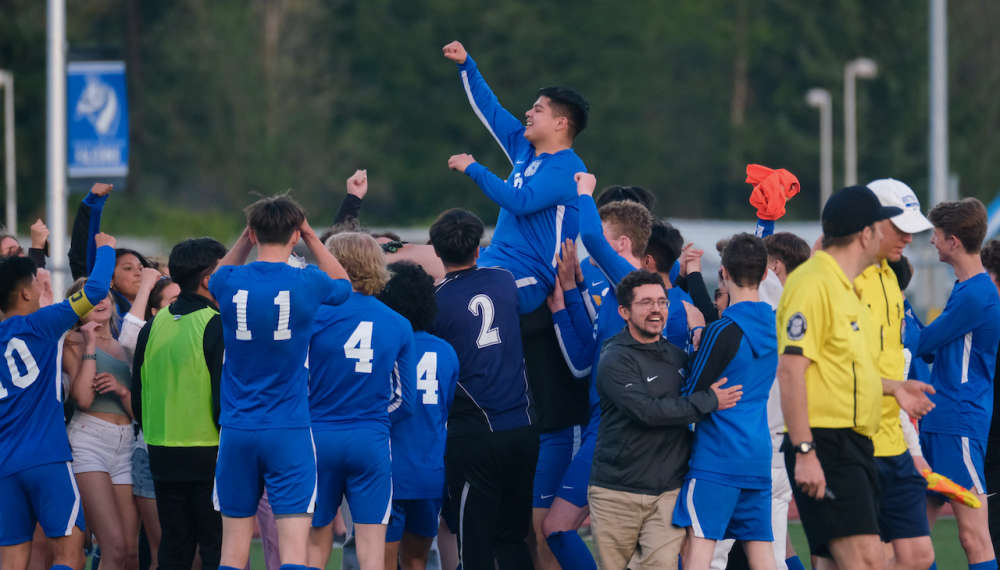