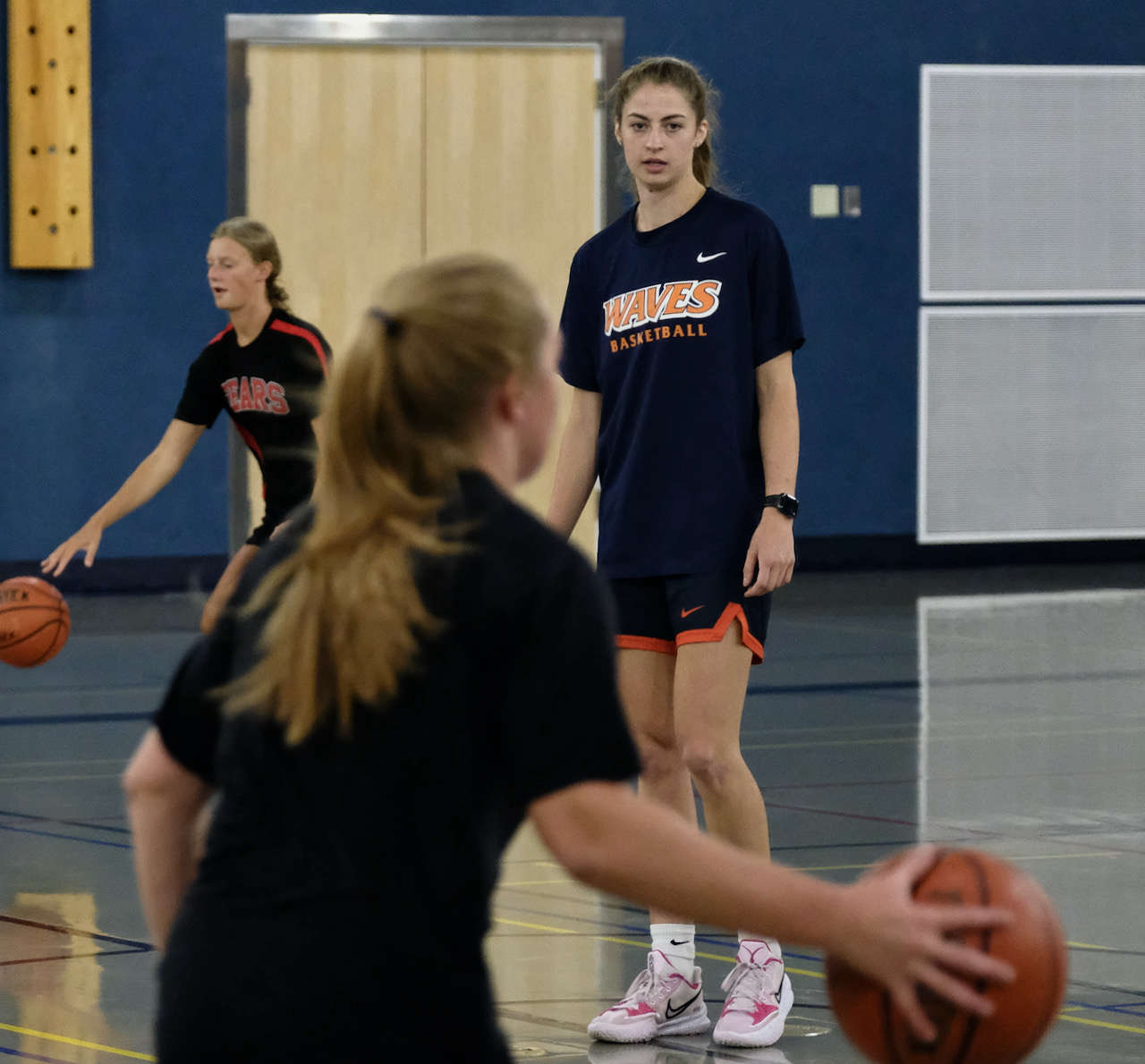 Juneau, Alaska (KINY) - She doesn’t have to shovel snow off the driveway when looking for a game now but Pepperdine University starting point guard Kendyl Carson remembers those elementary school days that led her across Juneau middle and high school courts to sandy beaches in Malibu, California.

“I remember having to shovel a little square, a little basketball court,” Carson said. “I wouldn’t shovel the driveway because I was like, ‘I don’t need the whole thing.’ But I would shovel just a square and play in the snow so I could still shoot baskets.”

“My career definitely started with the basketball hoop my parents got me. We put it out on the road. I got a hoop fest ball… rain or shine, snow, my parents had to beg me to come inside…”

Carson, a 2020 Juneau-Douglas High School: Yadaa.at Kalé graduate, held a basketball clinic last week at Marie Drake and is spending an extra week in her hometown working out and connecting with young players chasing the same hoop dreams.

“The camp was last minute,” Carson said Saturday. “But the kids that showed up are absolutely loving it. And just today, seeing the difference between the little kids in the morning to what they were doing today… I don’t think anyone touched the rim yesterday shooting and today they were making full layups so I think I am doing something right… It has just been fun to work individually with some kids that I have never met before and just be able to impact them a little bit… the feedback from parents is that they are loving it.”

Carson said her biggest advice to young athletes is to put in the work.

“You have got to be in the gyms doing this,” she said. “Showing up to things. It is a long, slow, lonely grind sometimes but if you put your mind to it you can really do anything you want…”

Carson said at Pepperdine she often finds herself reflecting on Juneau.

“I always think back on how fun high school basketball was,” she said. “Especially here. I miss high school basketball. I miss the region tournament. Playing in front of all these fans in a small gym that is packed. I like the community spirit, and that is what I found at Pepperdine, too. That is why I went there. I am probably the first person my teammates know from Alaska. It’s not a thing. So it is cool to be representing that. We are actually attending the Alaska Shootout this year so they all will get to go to Alaska.”

“I wouldn’t take my jersey off,” Carson said. “My parents were like, ‘Kendyl, you need to change.’ It was a huge jersey. I didn’t care what number I was as long as I had a jersey... we would just go all out at the aux gyms…”

Carson played sixth and seventh grade for Floyd Dryden and then switched to Dzantik’i Heeni for eighth grade as most of her friends who were planning to play at JDHS were at DZ.

“I remember, like sixth grade, was the funnest thing ever,” Carson said. “That is when my feet stopped growing. I had really big feet. And my basketball shorts were huge on me and I loved it. I thought I looked so cool… I made the A team and was so excited… that was my first experience with Ketchikan. They came and beat us and I was like, ‘Yep, this is going to be a long rivalry.’”

Middle school ferry trips to Haines progressed to a freshman season at JDHS.

“I knew I had a big role,” Carson said. “I had played against the high schoolers growing up probably since elementary school… My dad, when he helped coach, would sneak me into their practices… I used to go against them and then play open gym after. I knew I had a big role to step into but I was real young and I never looked at it like a leadership role… But you can’t just pick and choose when you want to be a leader and when you don’t. I think my freshman year I had an opportunity to be a leader but ended up not being one… but skill level and as a base program with JD it was a good year to see what we could do.”

Carson would move to Bellevue, Washington, before the season ended to play AAU basketball on the Nike hoops circuit. She finished her freshman season at Bellevue and played as a sophomore and junior for Prairie High School in Vancouver, Washington, helping the Prairie Falcons win a state championship as a junior. She then returned for her senior season at JDHS and led the Crimson Bears to a top state ranking before COVID-19 shut the season down.

Carson signed a full-ride scholarship with Pepperdine, joining the team during the beginning of the pandemic and was elected captain by her sophomore year. “That was a big responsibility,” Carson said. “We had to make the most of half our team getting COVID halfway through the season. Now more is expected of us this season and that is what I’m going to keep pushing at Pepperdine - to keep rebuilding a program.”

Pepperdine coach Brian Rosario said Carson’s ability to see the court as a 6-foot-1 point guard makes her a commodity in any conference.

“She has really good shooting range,” Rosario said. “And the ability with the ball to see a pass before the receiver sees a pass is coming. She is one of our hardest workers on and off the court and I think that shows when the team voted her as captain. That is special…”

For a full podcast interview with Kendyl Carson talking about growing up hooping in Juneau and how she got to Pepperdine University go to KINYradio.com, click the On Demand tab, and click on Alaska/Juneau Sports With Klas Stolpe. 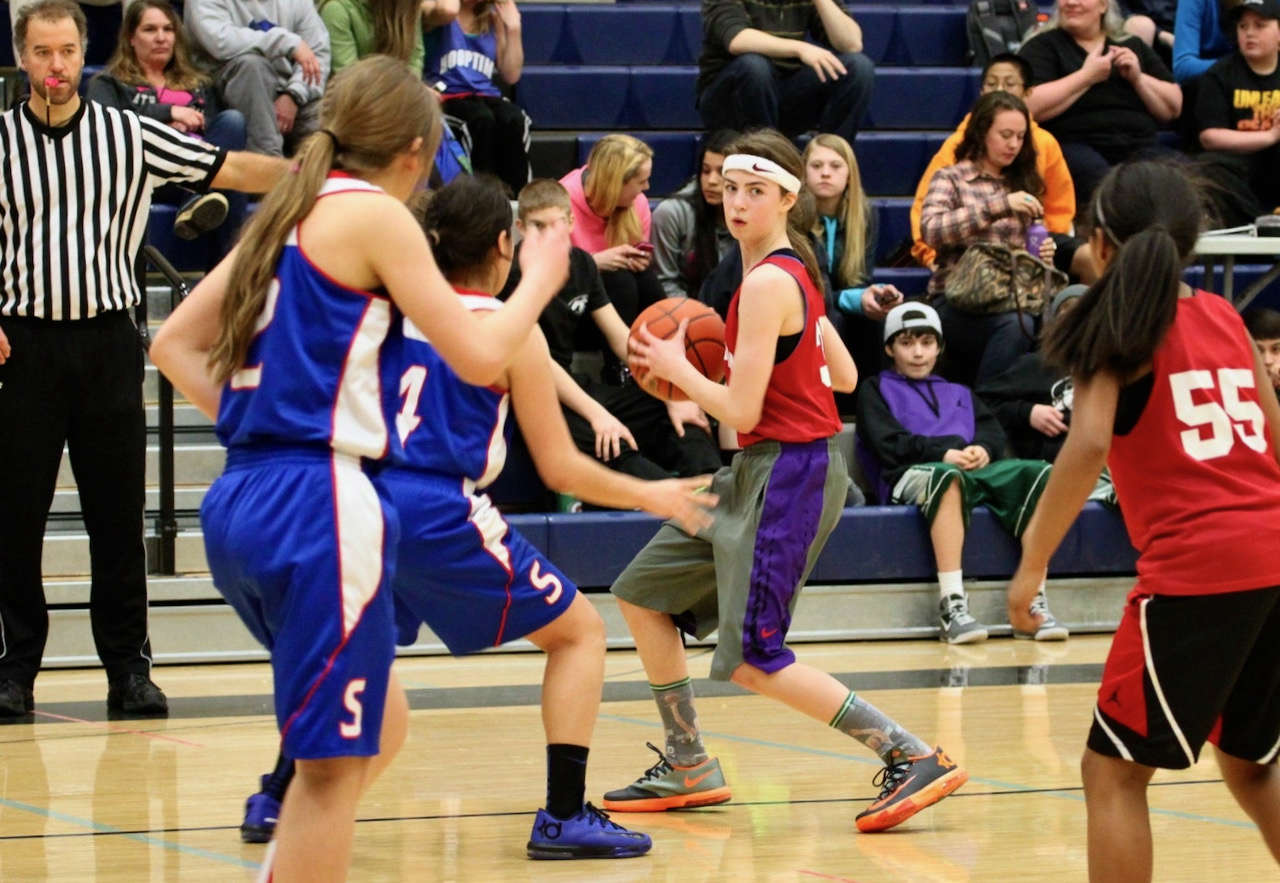 Above - Kendyl Carson playing in middle school Hooptime basketball action against Sitka and - below - in action at Pepperdine University. 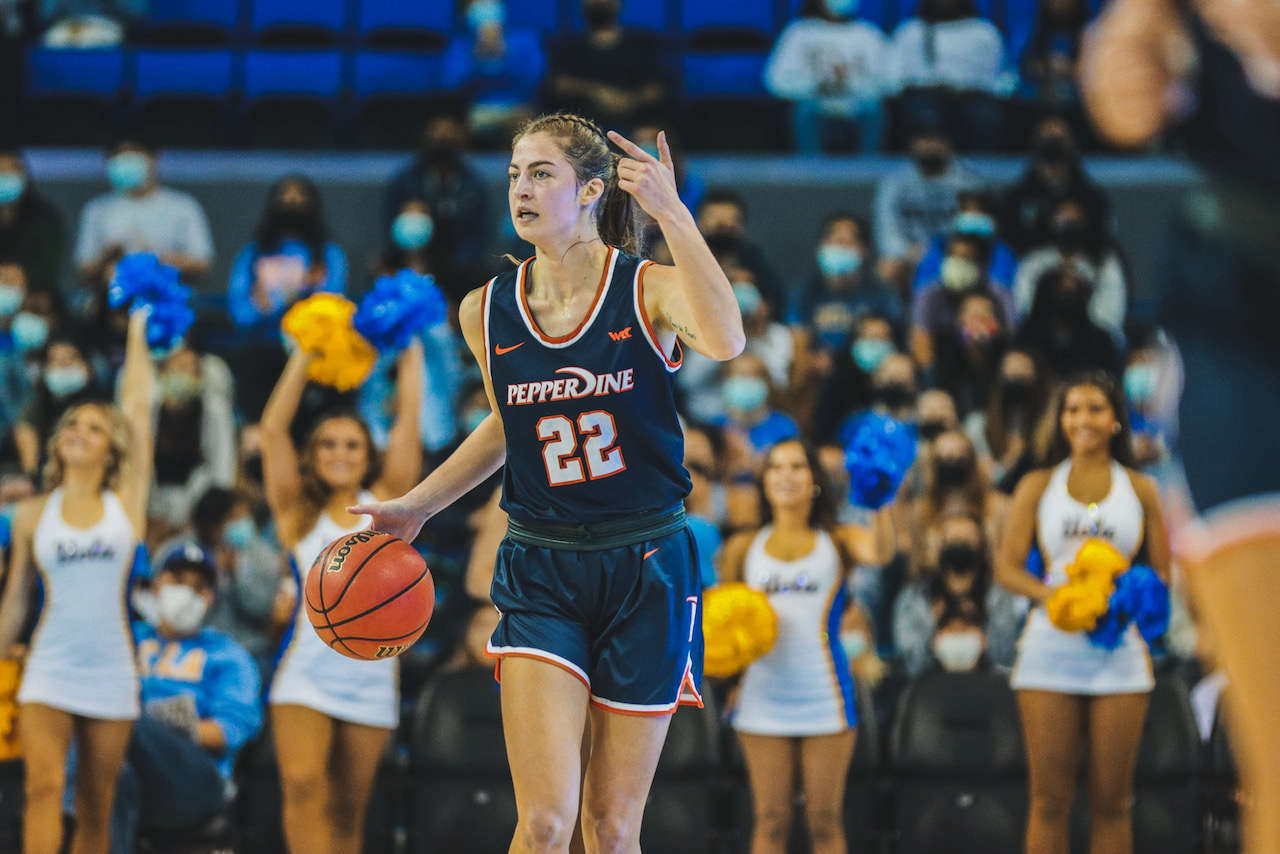