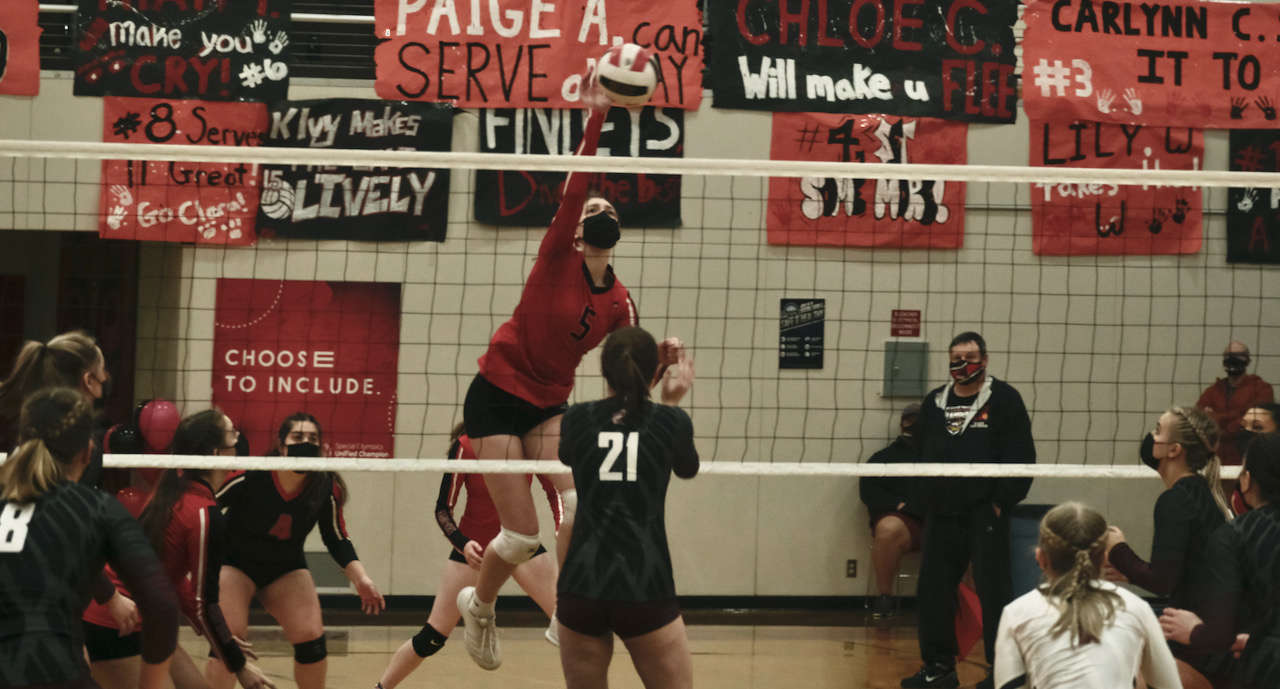 Juneau, Alaska (KINY) - Juneau-Douglas Yadaa.at Kalé senior Brooke Sanford charged a Ketchikan serve from the back row, put a perfect pass about mid-bleacher height to junior Carlynn Casperson, then launched herself, right arm cocked, into the air five feet from the net and terminated her final career high school home court point to give the Crimson Bears a Senior Night match win, three sets to one, over the visiting Lady Kings.

“It’s pretty exciting,” Sanford said after the match. “A lot of emotions right now. Trying to keep it together, though. Happy moment.”

Senior nights are always emotional and Ketchikan made it more so by staying within two points most of the final set.

Sanford said one thing was going through her mind.

“That was pretty awesome,” JDHS coach Jody Levernier said of the hit. “She came all the way from the back of the court, passed the ball, ran all the way up to the front and smashed it. Brooke played really well tonight. She hit the ball harder than I have seen her hit all year, many times. That was pretty exciting. She probably had close to 20 kills for the night.”

The Lady Kings had opened the fourth set with leads of 3-1 and 4-2 on kills by junior Lindsey Byron and sophomore Bree Johnson. That duo would be trouble all night, along with junior Alli Thomas and sophomore Issabella Zink.

Sanford earned ball possession with a kill and sophomore Chloe Casperson served to a 5-4 lead, which was never relinquished.

The Lady Kings tied the score at 5-5 but could only draw within one point through the remainder of the game, thanks in part to the play of junior middle hitter Ashley Laudert, who totaled 23 kills in the two matches and a number of defensive shot alterations as she challenged the Kayhi attackers.

“It’s nice to be able to actually play this year,” Laudert said. “I feel like Kayhi has definitely come up and they are a good team to play against for senior night. It’s great. I just hope that next year the juniors will help with us, too.”

Laudert picked the right night to have her best series as senior outside hitter Merry Newman sprained an ankle in practice and could not compete.

“It’s been really nice playing with these seniors,” Laudert said. “My freshman year I was brought up midseason and they really helped include me with stuff and they still are teaching me so many things and it is wonderful to learn from them.”

When Kayhi’s Johnson killed for point 13, Sanford answered with an attack and a service ace. When Kayhi’s Thomas killed to close within one at 16-15, the Lady Kings lost possession and JDHS sophomore Remi Starks served an ace.

A JDHS service error and a net violation brought the Lady Kings to within one point at 18-17 but Crimson Bears senior Cosley Bruno killed for point 19 and Laudert blocked a shot for 20.

“I like it a lot,” Bruno said after the match, comparing the Crimson Bears den to her previous playing stint at Mt. Edgecumbe. “Yeah, this is my home court, I like it a lot for sure.”

A young fan ran up to hand her flowers.

“This is my nephew Milo,” she said. “Yep, Milo’s my biggest cheerer right here. I think just because it was senior night the win meant that much more. It was a good way to end our very last home game and we’re coming to the end of the season so it just feels good to win. Hopefully we can do the same next weekend.”

When Kayhi’s Byron killed to close within one point at 20-19, the Crimson Bears’ Laudert blocked point 21 and senior Paige Adams served 22.

“It means a lot,” Adams said. “It feels really good to have won on a night like tonight. We had an emotional beginning, of course, but we finished the way I think we wanted to finish. I thought it was a good night overall. With this senior group, some of us have been together since before high school and middle school, so being connected with the people is pretty cool to still be playing with them.”

A JDHS service error gave Kayhi point 20 and Byron killed for point 21, drawing the Lady Kings again to within one point.

Sanford again put a scoring shot onto a clear space between Ketchikan defenders for JDHS point 23.

“It feels really good,” Levernier said of the win. “Especially with Merry being injured. And just coming off of this and having a little bit of confidence. We miss Merry terribly. She’s a huge presence on the court, but they got a win without her and she’ll be with us, hopefully she’ll be playing, but if she’s not she’ll be on the bench cheering them on. I think it will give them some confidence that they can do it.”

The confidence was tested as a JDHS service error gave Kayhi point 22, but Sanford put a hard shot off a blocker for JDHS point 24.

JDHS again put a serve into the webbing and put hope into Kayhi with the Lady Kings point 23.

The Crimson Bears’ Sanford received it and caressed it into a pass to teammate Carlynn Casperson, who spiffed it up to the right height and Sanford attacked the front row like a thunderclap with the match winner.

Sanford said she would miss the scoreboard lighting up after terminating a shot.

“Oh yeah, definitely going to miss that and…” her voice broke as emotions took over. “Ah, dang it…”

Sanford wiped some tears, stifled a sob and continued.

“I’m going to miss, um, the fans a lot,” she said. “The people coming to watch. Just the team all together.”

A strong showing of student fans wore a variety of all-weather oilskins and held fishing poles and dip nets to aid in their team’s catching of the Lady Kings.

“It was pretty exciting,” Sanford said. “I thought, ‘Might as well go all out.’ Last home game so I am glad that they participated in going all out. Yeah, I’m glad they got it together and had some spirit.”

Sanford added that it has been great playing with this group of seniors.

“I’m just really sad that Merry couldn’t make it on the court tonight,” she said. “But other than that I love playing with the whole team, especially Paige and Merry, who I have been playing with for a while. Now, regions is next. So we are definitely going to go into regions with a bunch of confidence… and moving our feet.”

Newman did make it in the game. Ceremonially. She walked with crutches to the service line as part of the starting line up and put the first ball into play and Ketchikan hit it into the net and then she crutched off to cheers from the home fans and applause from teammates and opponents.

“I was terrified I would not make it,” Newman said. “It’s definitely emotional. The last home game. I’m just really proud of all three of them… Cosley and Paige, and Brooke just had the game of her life and I can’t wait to find out how many kills she got in that game. It’s so fun to watch her play, and all of them.”

The Crimson Bears have a 6-2 conference record as do the Thunder Mountain Falcons and Ketchikan is 0-8. The Lady Kings host the Region V Tournament Friday and Saturday at Ketchikan. 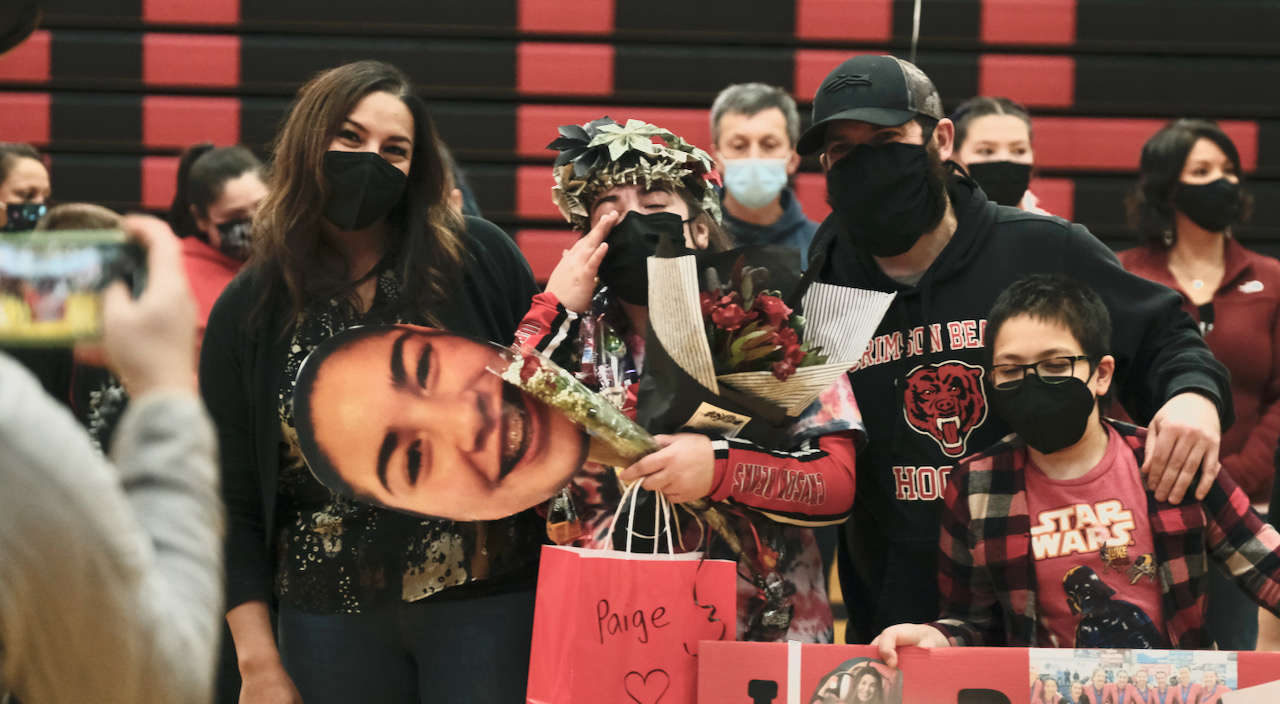 Above - JDHS senior Paige Adams wipes away a tear as family members pose for a photo. 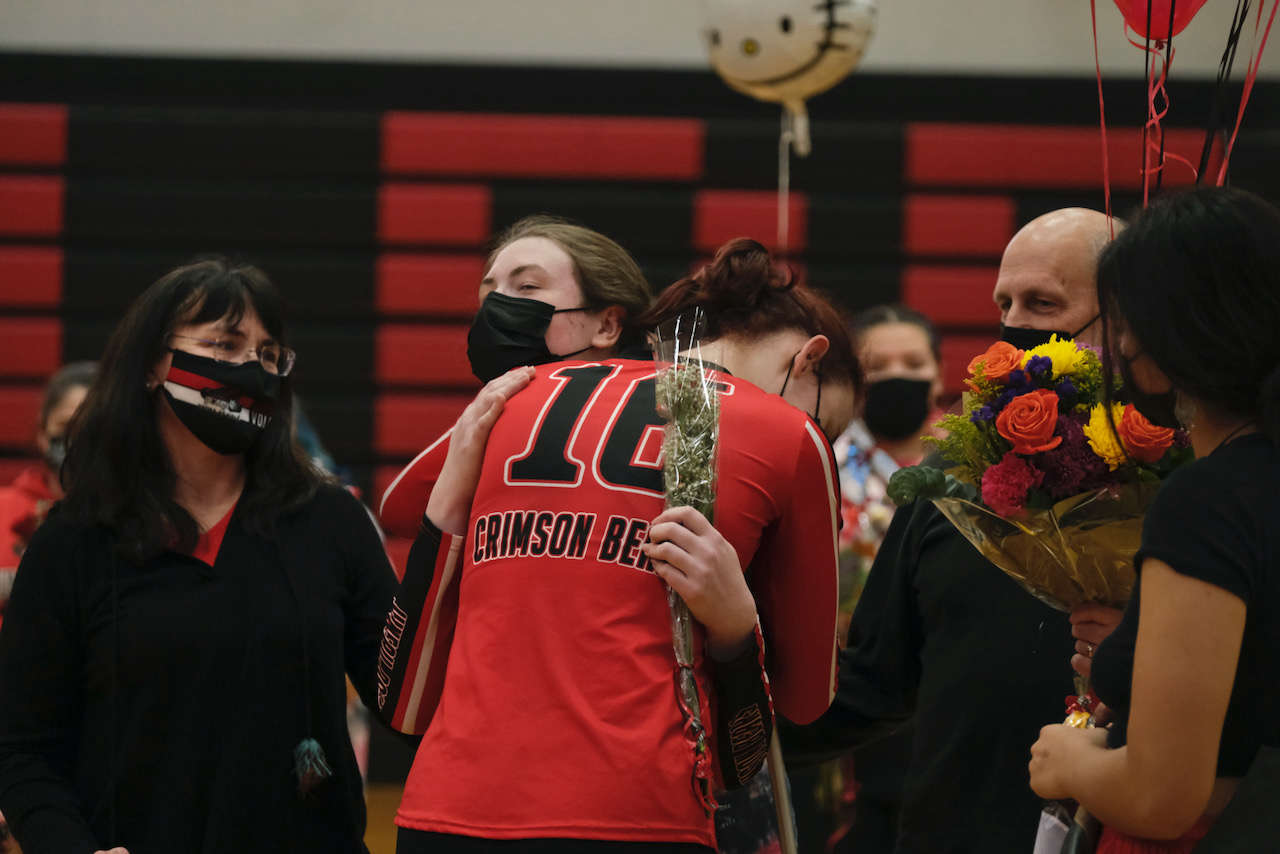 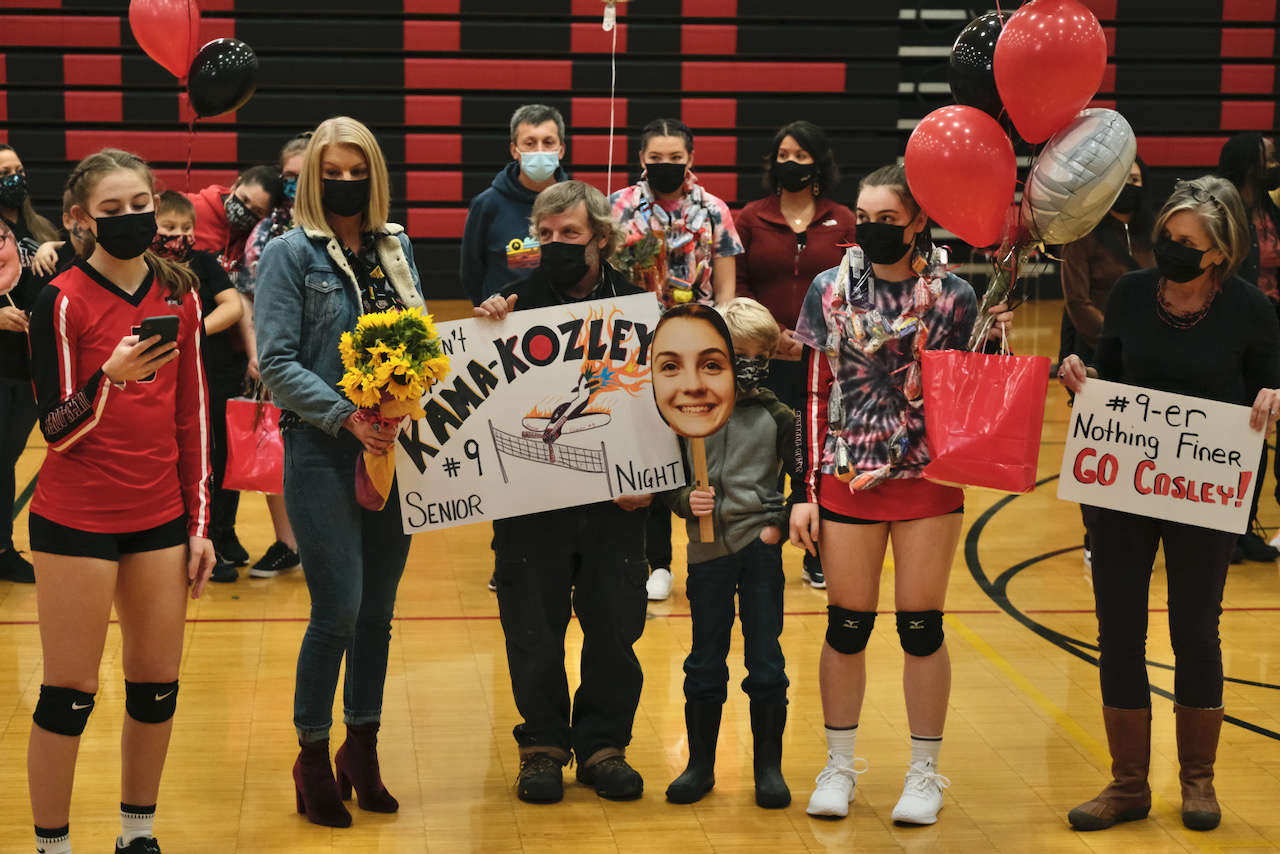 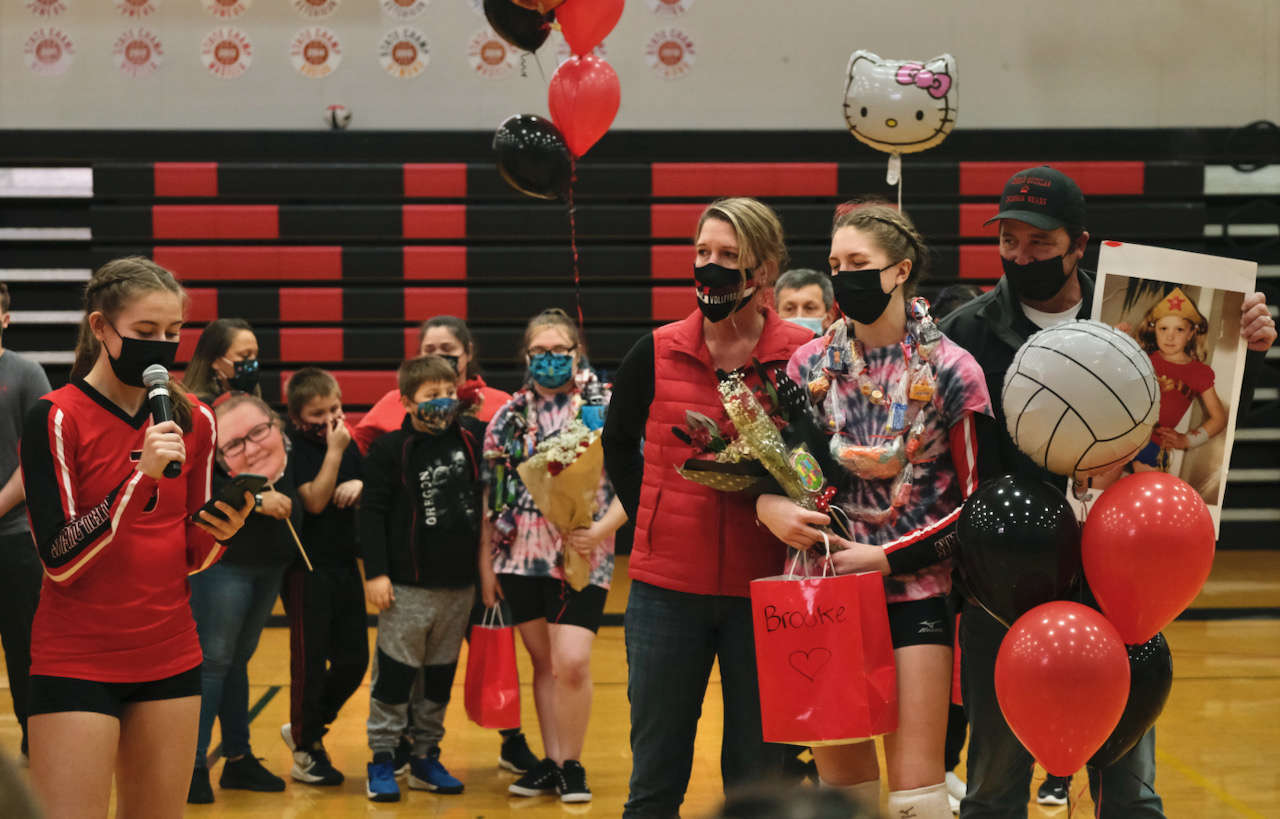 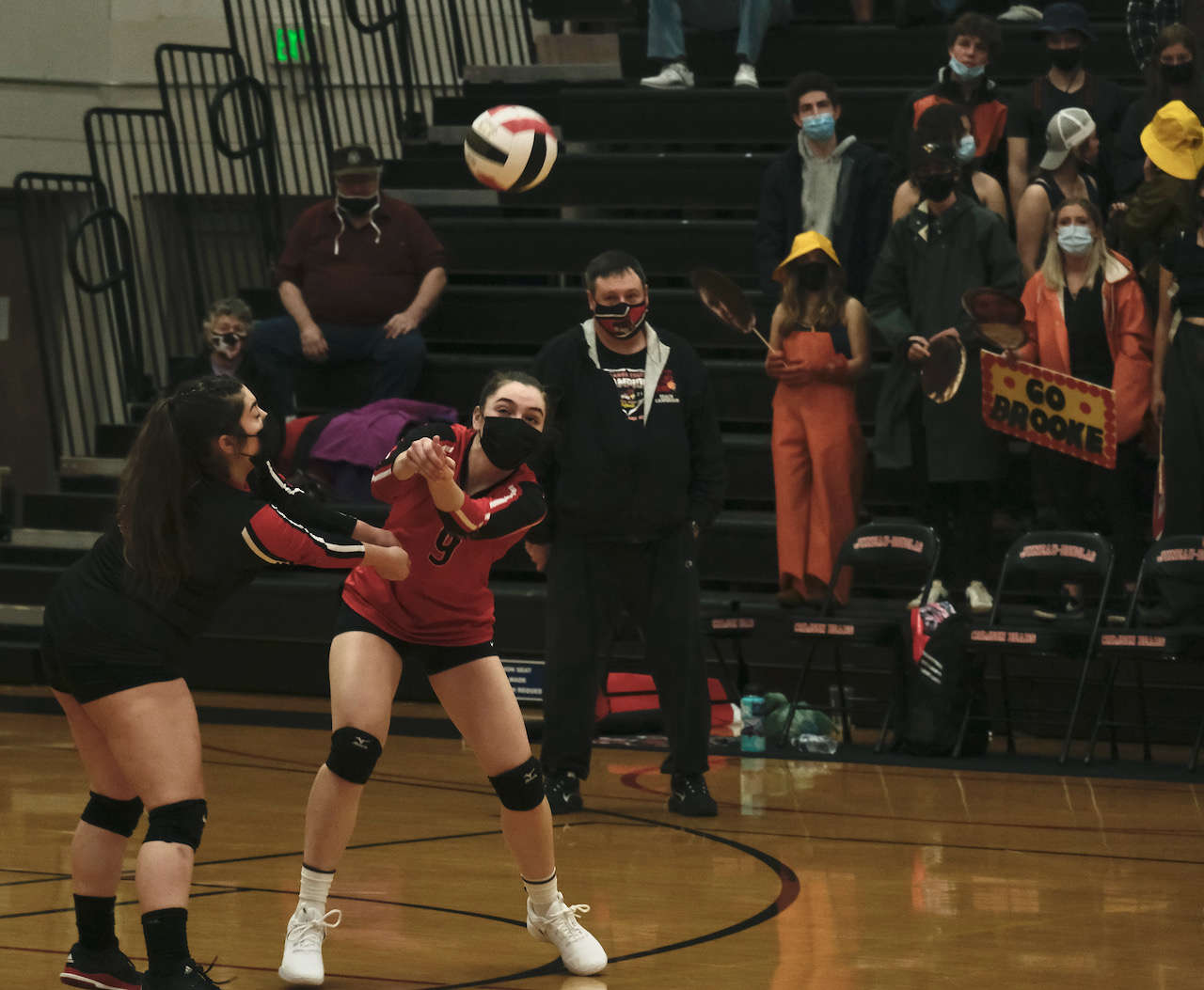 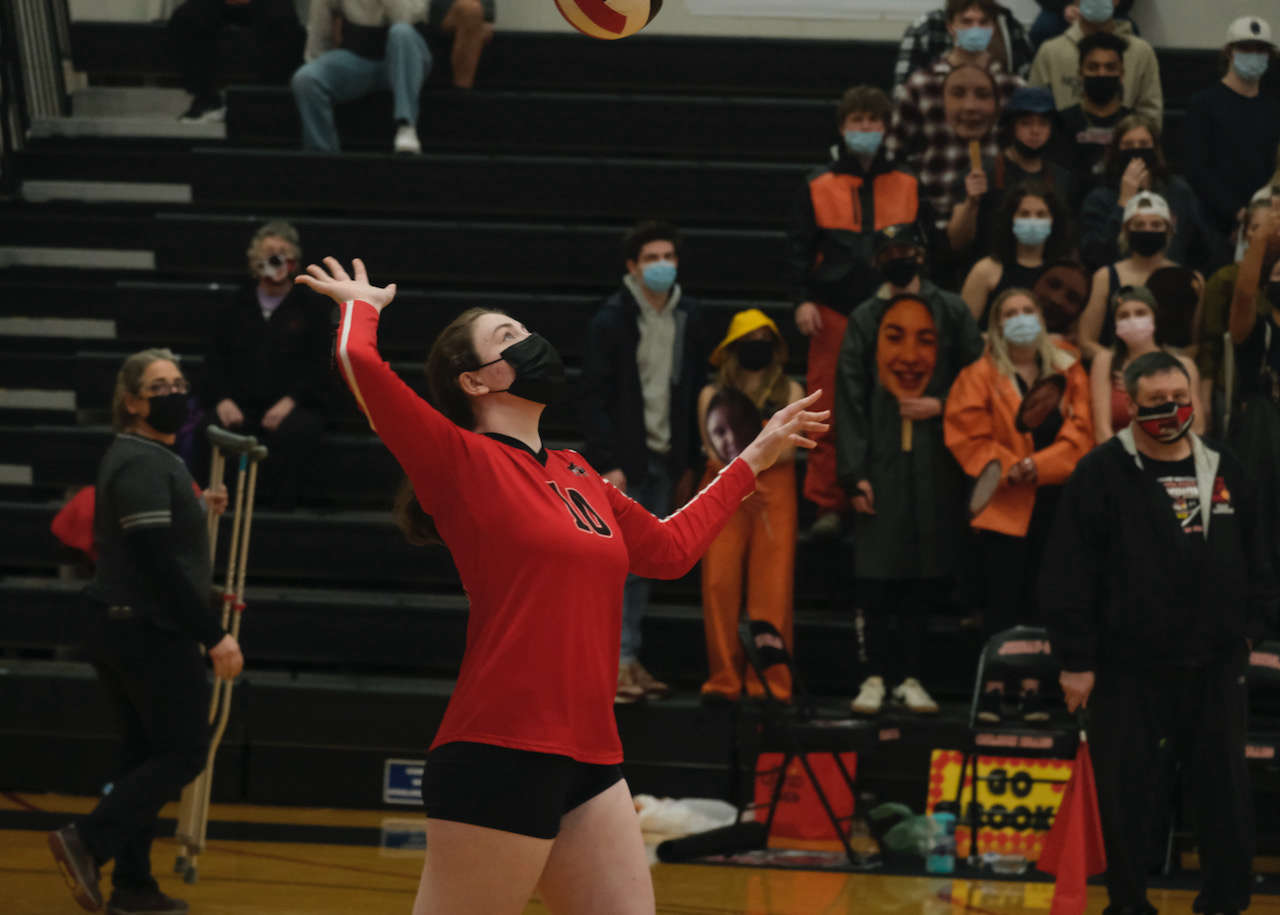 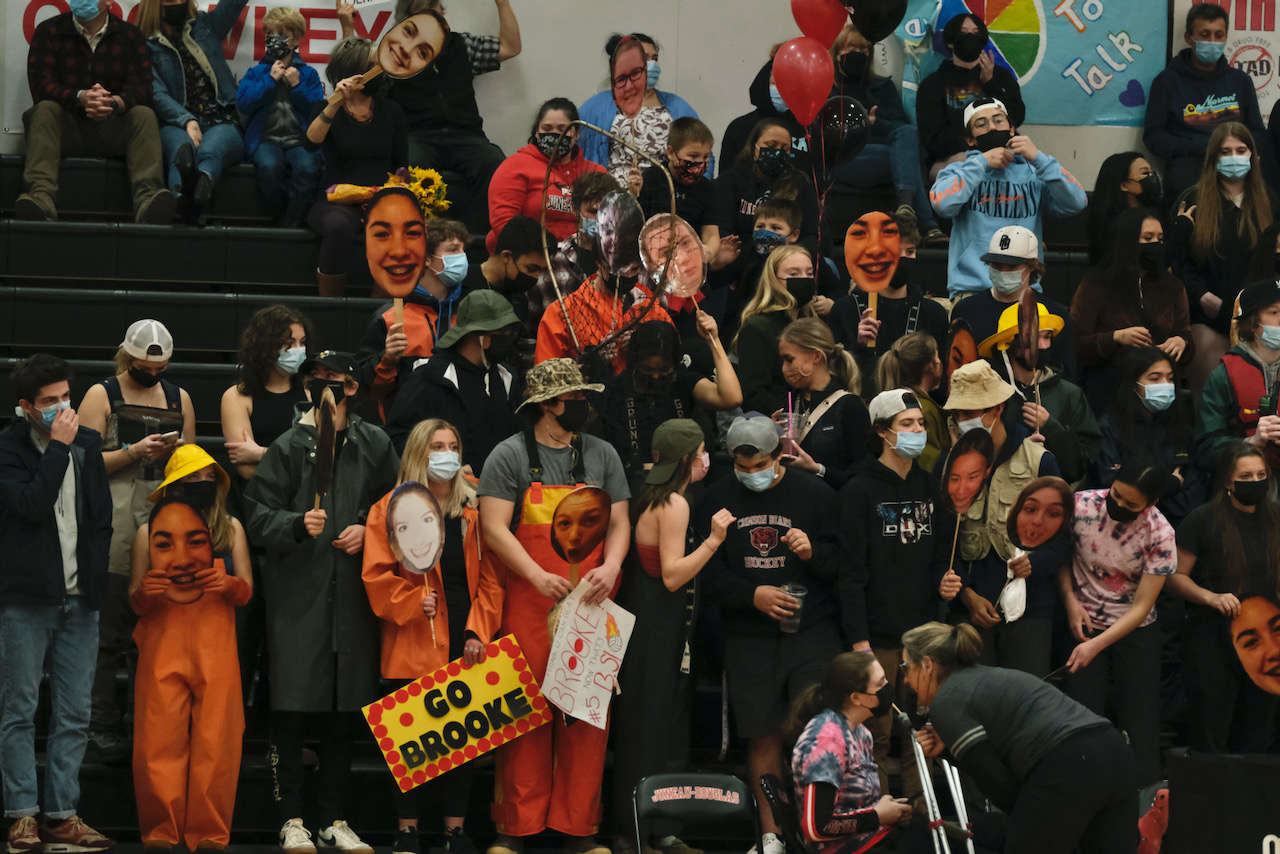 Above - Members of the JDHS student body dressed in oilskins and held fishing gear to help the Crimson Bears catch the Ketchikan Lady Kings.