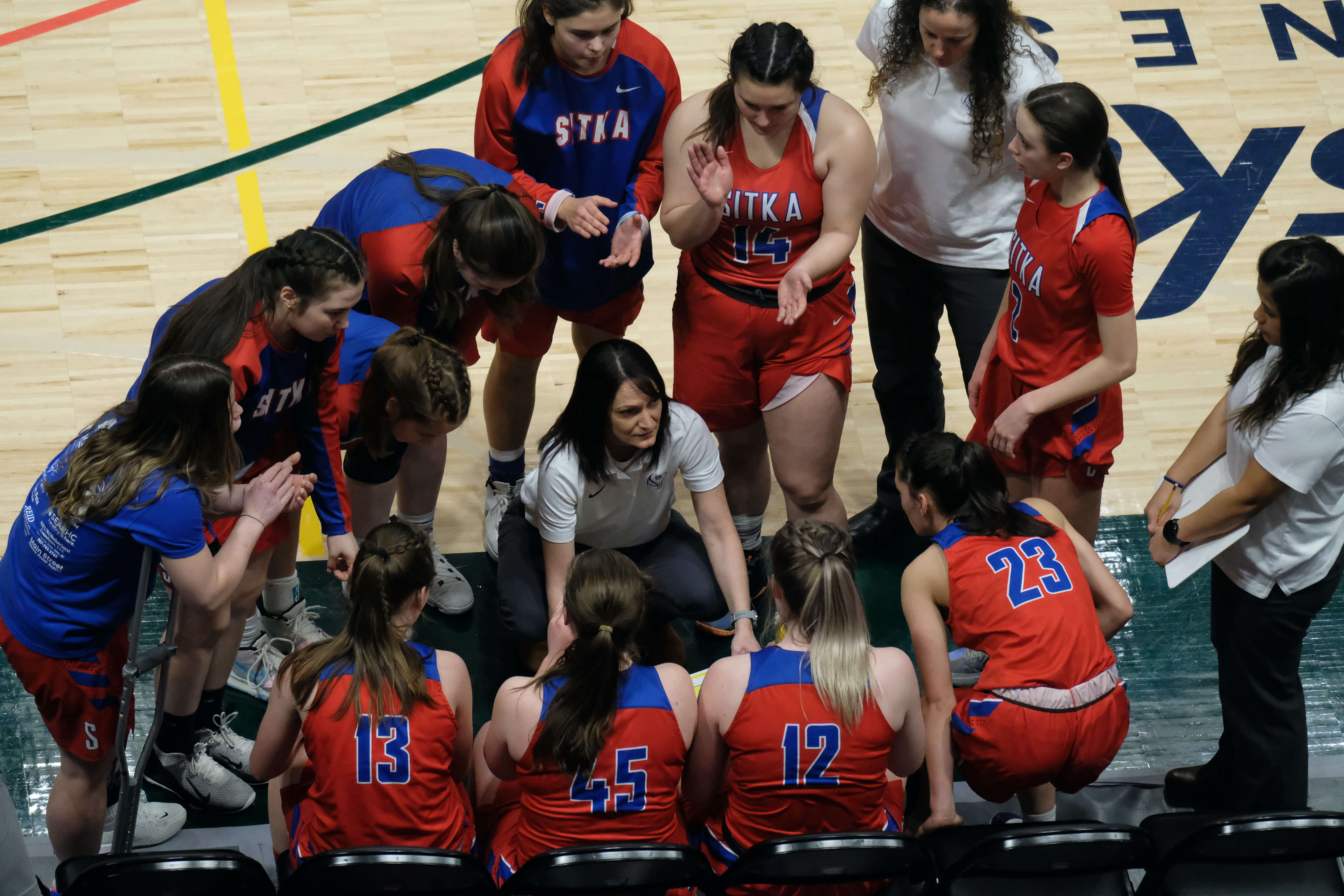 Sitka coach Minday Bartolaba talks with the Lady Wolves during a time out in their state title game against Barrow on Saturday at Anchorage's Alaska Airlines Center. (Klas Stolpe/KINY)

It was a heart-breaking loss in front of a packed gymnasium for the early afternoon contest.

“I think they left it all on the floor today,” Sitka coach Mindy Bartaloba said. “All the energy is out of them. That is all I could ask.”

Trailing 40-29 with eight minutes left to play, Sitka opened the fourth quarter on a 9-0 run on free throws by senior Chloe Morrison, a basket inside by junior Ava Brady, another free throw by sophomore Naia Nelson and back-to-back baskets by sophomore Maitlin Young. Her second shot was the result of a steal under the Barrow basket and one she dribbled the length of the court to hit all net from past the arc and the Lady Wolves trailed 40-39 with 4:50 left to play.

Barrow’s Lewis (Caitlyn) Brower answered the run with a score from outside the arc and 7/8ths of the Alaska Airlines Center crowd erupted with banners and cheers supporting the gold and blue of the Western Conference Champions.

The Eastern Conference Champion Lady Wolves had to step up before the game even began as starting senior point guard Tawny Smith was injured with under 20 seconds left to play in the semifinals on Thursday in a win over Monroe.

“We talked about how this opportunity is so special,” Bartaloba said. “How they worked hard to get here and this is the end of their season. There is nothing to say so go out and play with all your heart and all your effort and I think they did. I think they did just that.”

Barrow’s Jenilee Donovan scored and and was fouled, giving Sitka’s Morrison her second of the night. Donovan missed the extra shot but Barrow’s Alyssa Grimes pulled in the rebound and scored for a 47-41 lead.

Brady again answered for Sitka to pull back to 47-43.

Sitka reached the free throw line on a turnover but missed the shot.

With two minutes and change on the clock, Barrow’s Brower drew a foul on Sitka’s Young and missed the free throw and the ensuing scramble put the held ball in favor of the Whalers.

Barrow’s Kimberly Wolgemuth drew the third foul on Sitka’s Morrison and missed the shot, but the rebound went to Barrow’s Kiara Burnell, who scored for a 49-43 advantage.

Barrow’s Donovan then drew the fourth foul on Morrison with 31 seconds left but missed the front end of the one-and-one again and the rebound went to Sitka but a turnover changed the possession.

Forced to foul, the Lady Wolves put Brower on the line with 14.9 seconds remaining but she missed both shots.

Sitka fouled Brower again with 7.4 remaining and both shots misfired but Brower grabbed her own rebound and was fouled again with 4.3 left to play. Brower hit both of the extra shots to ice the game.

Bartaloba said she was proud of the Lady Wolves’ team chemistry.

“Just how they stuck together,” Bartaloba said. “There were times we were down by nine and we just didn’t give up and we just kept trying to come back and come back. Barrow is a great shooting team and we had to adjust for that.”

Sitka had their only lead of the game with opening baskets by Olney-Miller and Brady, which were answered by a 10-0 run by the Whalers’ Donovan, who hit back-to-back threes and scores by Wolgemuth and Yardley Tuilautala.

Sitka pulled to within three points, 13-10, on shots by Morrison and Brady as the Lady Wolves held a physical presence inside.

Barrow had a 20-12 advantage after eight minutes of action.

Barrow’s Donovan opened the second quarter with a score and Sitka responded with an old fashioned three-point play by Brady inside and scores by Harlee Nelson and Morrison to close to 22-19.

Barrow’s Brower closed the quarter with a shot past the arc for a 25-19 lead at the half.

Sitka’s Young opened the second half with a deep shot past the arc to close to 25-22.

Barrow answered with free throws by Donovan and a deep three by Burnell for a 30-22 lead.

After Sitka’s Brady hit a free throw, Barrow’s Burnell hit a pair of free throws and another three to lead 36-23.

Sitka closed the stanza with six points to Barrow’s four and trailed 40-29 starting the fourth quarter.

The Lady Whalers seven seniors capped off a high school career they began in kindergarten.

“We have all grown up together on the basketball court,” Barrow’s Donovan said. “All of our fans in Utqiagvik, all of us, we have grown up together. This was our last season together to play for our community.” 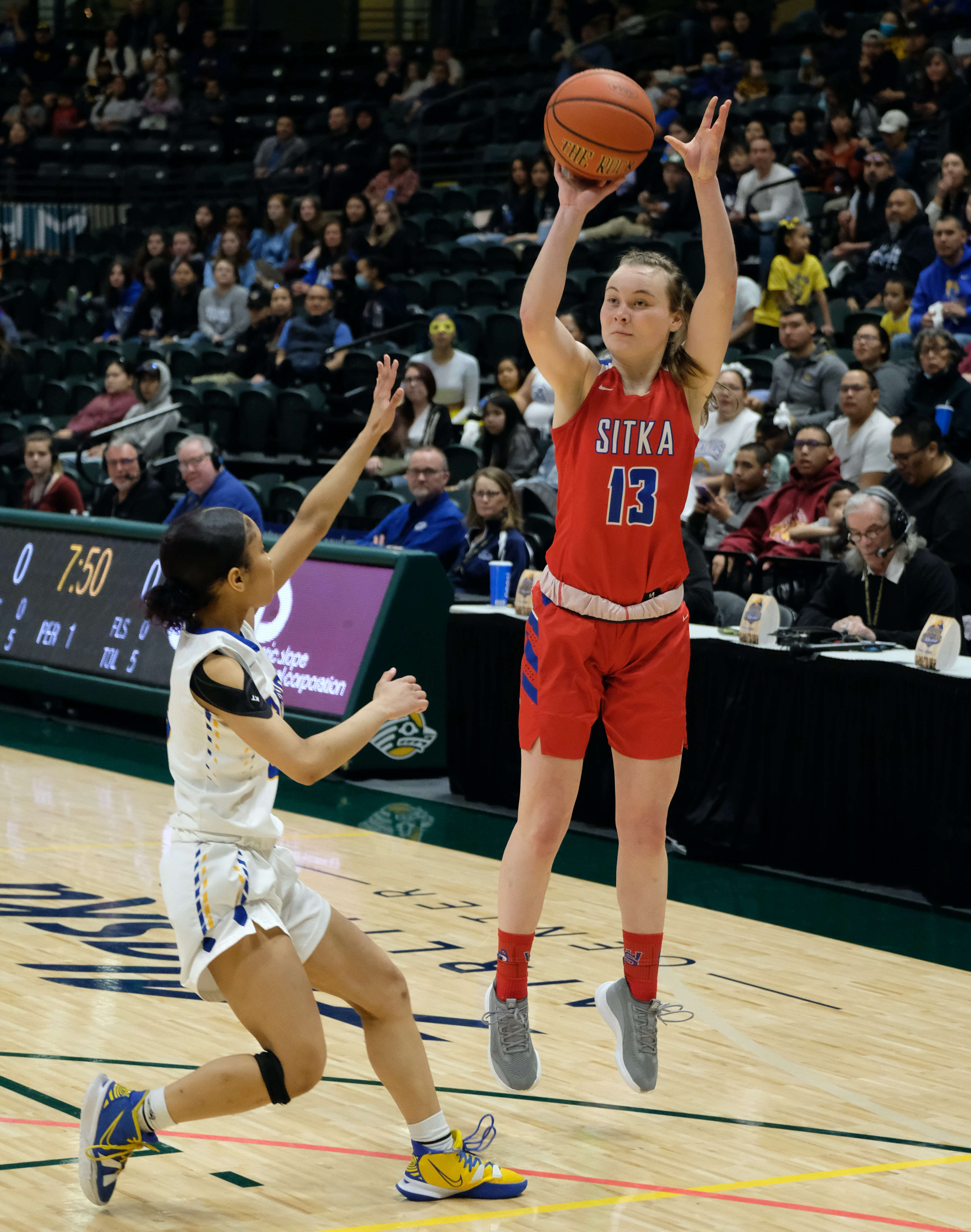 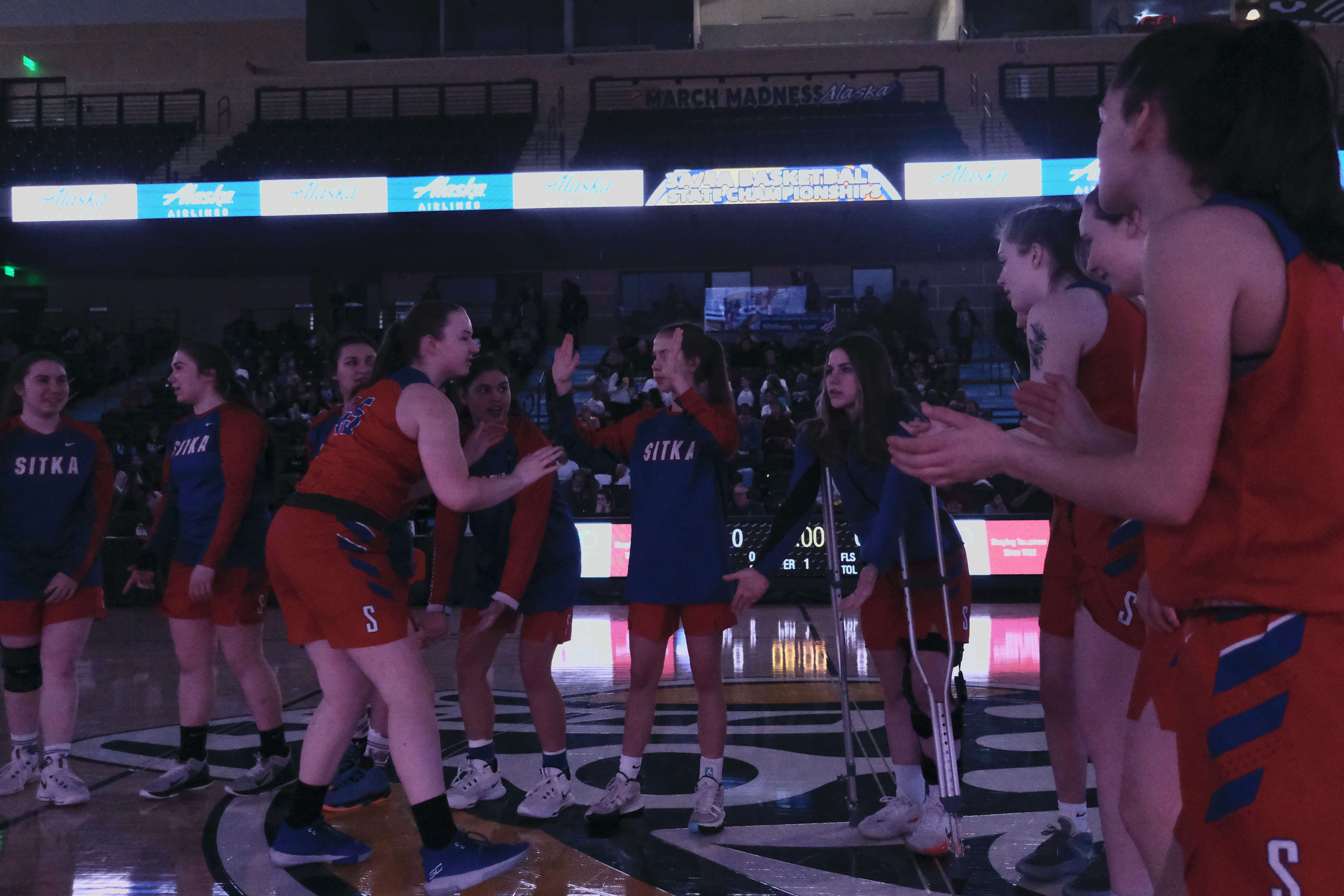 Above - The Sitka Lady Wolves get ready to start the 3A girls state championship game against Barrow on Saturday at Anchorage's Alaska Airlines Center. (Klas Stolpe/KINY)