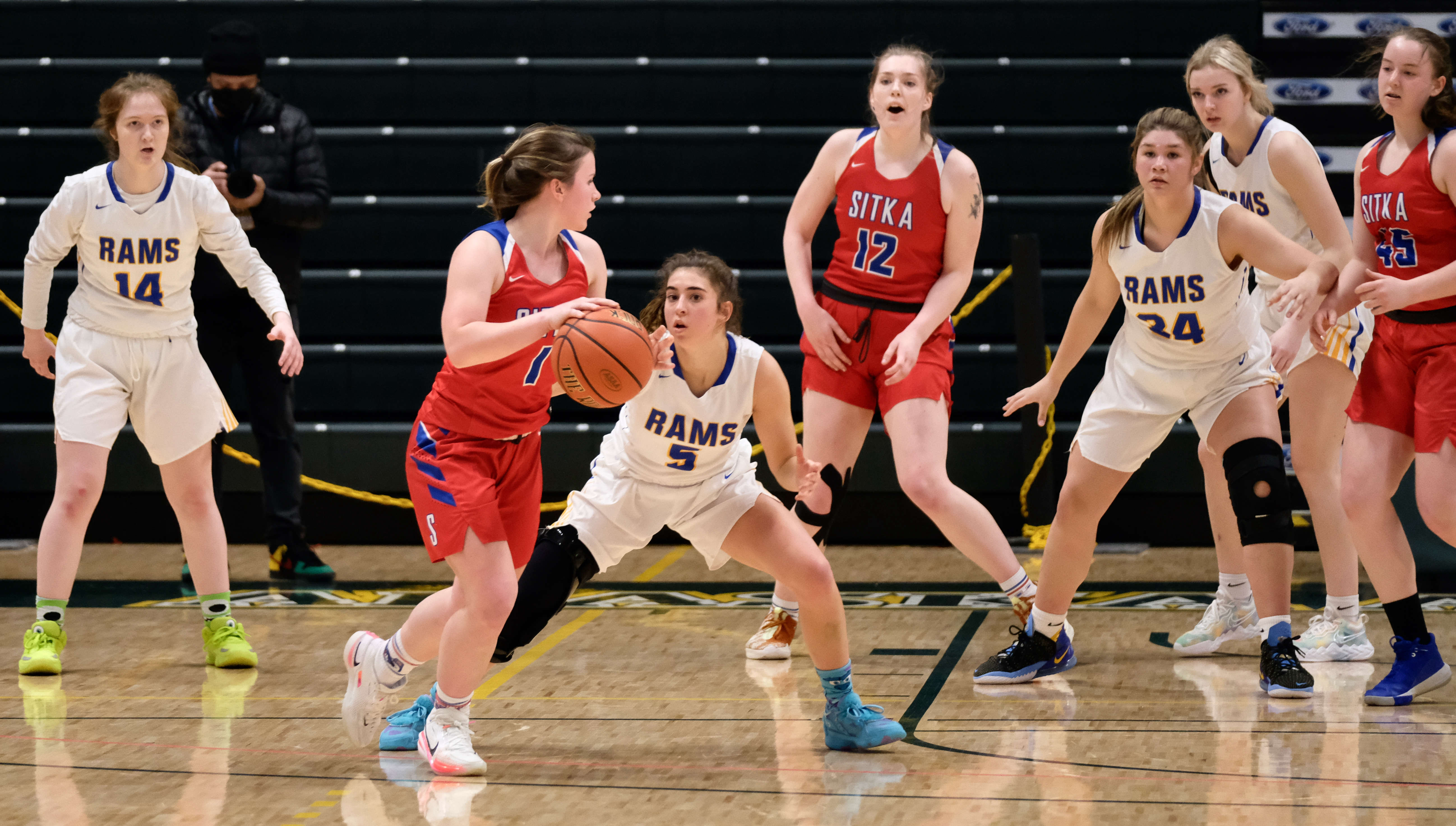 Sitka senior Tawny Smith is defended by Monroe senior Katrina Bast during the Lady Wolves 33-31 win over the Rams on Thursday.(Klas Stolpe/KINY)

Anchorage, Alaska (KINY) - Sitka star senior point guard Tawny Smith drove the lane with under 20 seconds remaining to play in the Lady Wolves semifinal game against the Monroe Rams, split the defense to draw a foul but went down with a knee injury and the score tied 31-31.

The Lady Wolves led the game throughout, withstanding full and half court man-to-man pressure from the Rams only to have the win tarnished by Smith’s injury.

“It’s a big loss for us,” Sitka coach Mindy Bartolaba said after the game. “We have had to play a series before with her (Smith) out and the girls did well but we’ll see how this fares for us tomorrow.”

Sitka opened the game with four turnovers under the Monroe press but the Rams could not capitalize from the field against the Sitka two-three zone directed by Smith on top and slowly the Lady Wolves put points on the board.

Senior Chloe Morrison hit inside for the game’s first points midway through the first quarter, sophomore Maitlin Young connected on a pair of free throws, junior Ava Brady scored inside, Morrison hit a free throw and Young hit a short jump shot for a 9-0 lead.

Monroe would get their first basket with 55 seconds remaining on a basket inside by junior Sophia Stepovich.

Young opened the second quarter with a shot past the arc for Sitka and Stepovich answered inside for Monroe.

Young hit another shot past the arc for a 17-4 Sitka lead and Monroe answered junior Margaret Zaverl scoring.

Sitka’s Olney-Miller hit a bucket for a 19-6 lead and seemed to have control of the Monroe press but the Rams closed out the quarter on a 9-0 run to trail 19-15 at the half.

Young scored to open the second half for Sitka and Stepovich answered with a pair of Monroe free throws.

Young added a free throw for Sitka and Olney-Young had two steals that turned into a shot past the arc for Young and a 26-19 Lady Wolves lead with two minutes left in the stanza.

Zaverl scored for Monroe and Young for Sitka to end the third quarter with the Lady Wolves up 28-22.

Monroe sophomore Tatyana Snowden opened the fourth quarter with a basket to cut the lead to four, 28-24 but Sitka’s Brady hit inside and Morrison made a free throw for a 31-24 advantage.

Monroe upped their pressure another notch and freshman Shannel Kovalsky scored inside, senior Katrina Bast hit from past the arc and Kovalsky hit against to tie the score at 31-31 with 1:20 left in the game.

“They stayed level headed,” Bartolaba said of the Lady Wolves. “We knew that these games coming up were going to be pressured and physical. We just made sure we stayed mentally focused and level headed through that kind of pressures.”

Monroe would suffer their own injury as Bast went down on a hard drive, and turnover, past her bench and be lost with a knee injury and 20 seconds left to play.

On the ensuing possession Smith broke full court pressure and was fouled as she drove through the key and had to leave the game with 12.1 seconds remaining.

After Olney-Miller substituted at the line and hit both free throws, Monroe called time out but was unable to get a shot off when play resumed.

Sitka coach Bartolaba paused when asked what she would tell the team after a great win that incurred a heavy loss.

“They have worked so hard to get to this spot here and come back here,” she said. “And I know their teammate would not want anything else than their best effort tomorrow so we’ll go in maybe with or without her and give it our best effort. And I know they would want to do that for themselves and for her.”

Young was selected the Player Of The Game.

“It was pretty exciting,” Young said after the game. “But it was tough to see our point guard go down at the end. She means a lot for our team but we had to win the game for her. Our coach had us prepared for the pressure in practice. We have been practicing for this moment for four months. So we were ready. Tawny is amazing. She means so much to this team. She’s an amazing leader and she really gets us started. She’s always positive, cheering us on… it was really tough to see her go down.” 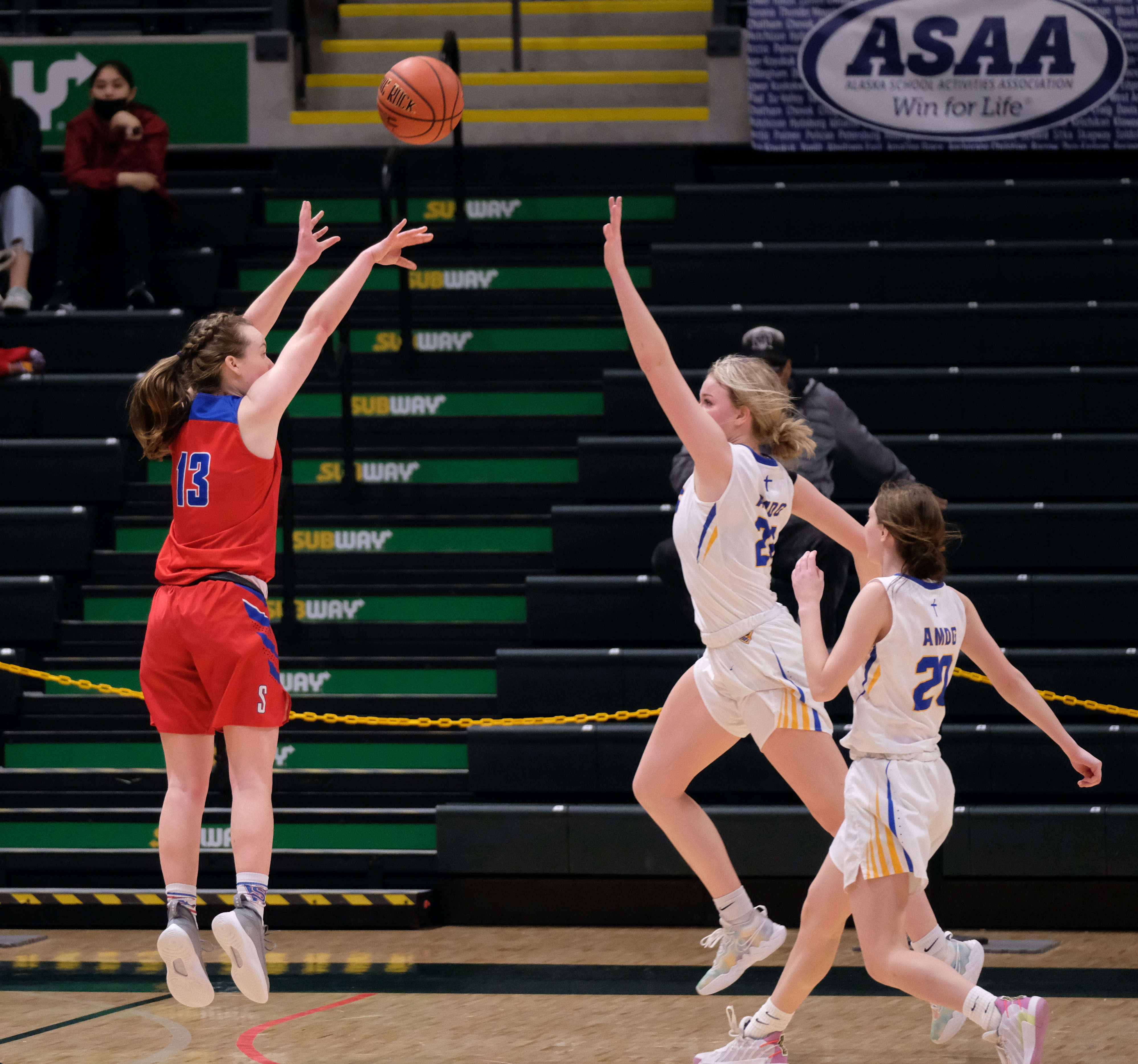 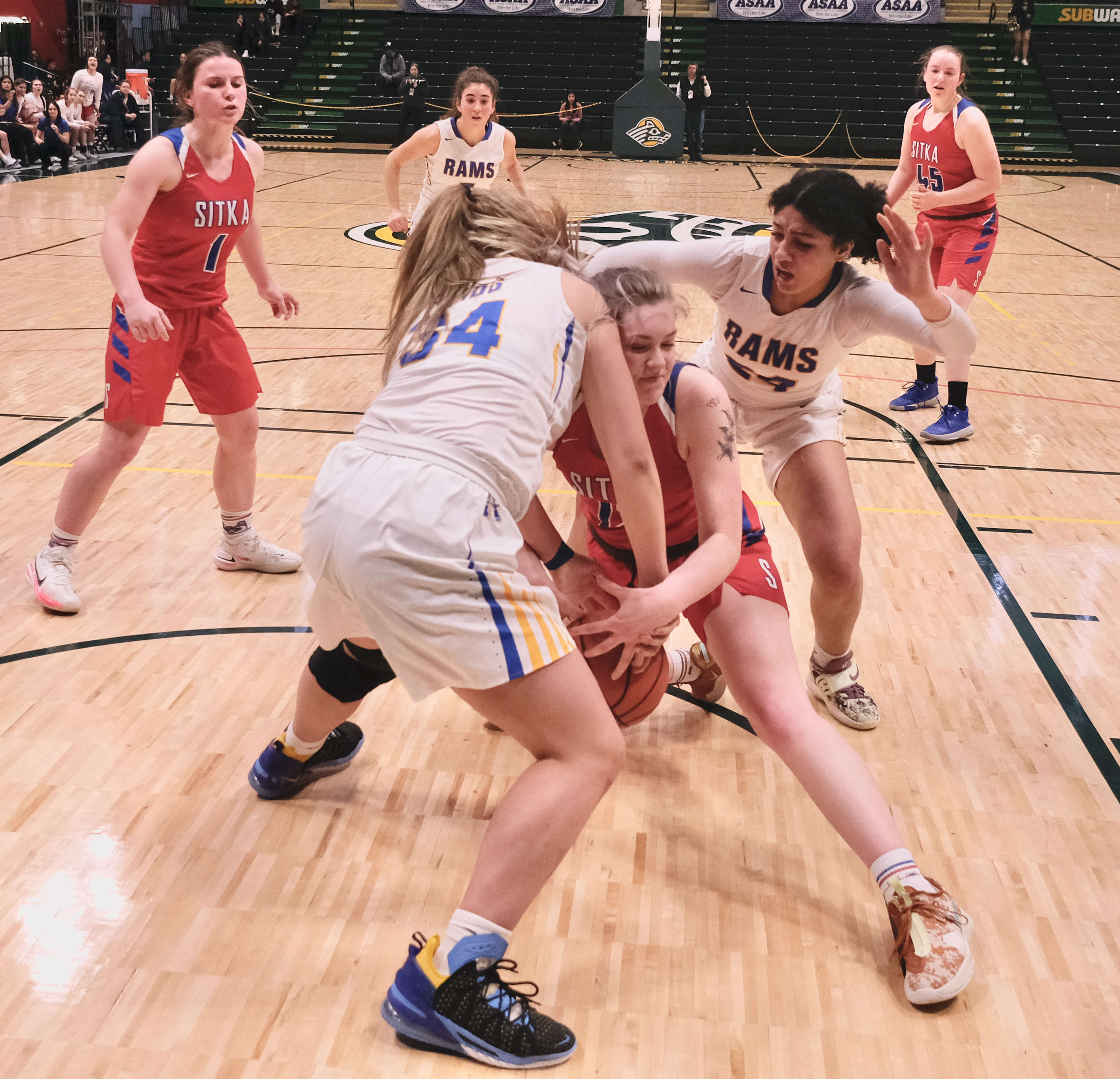