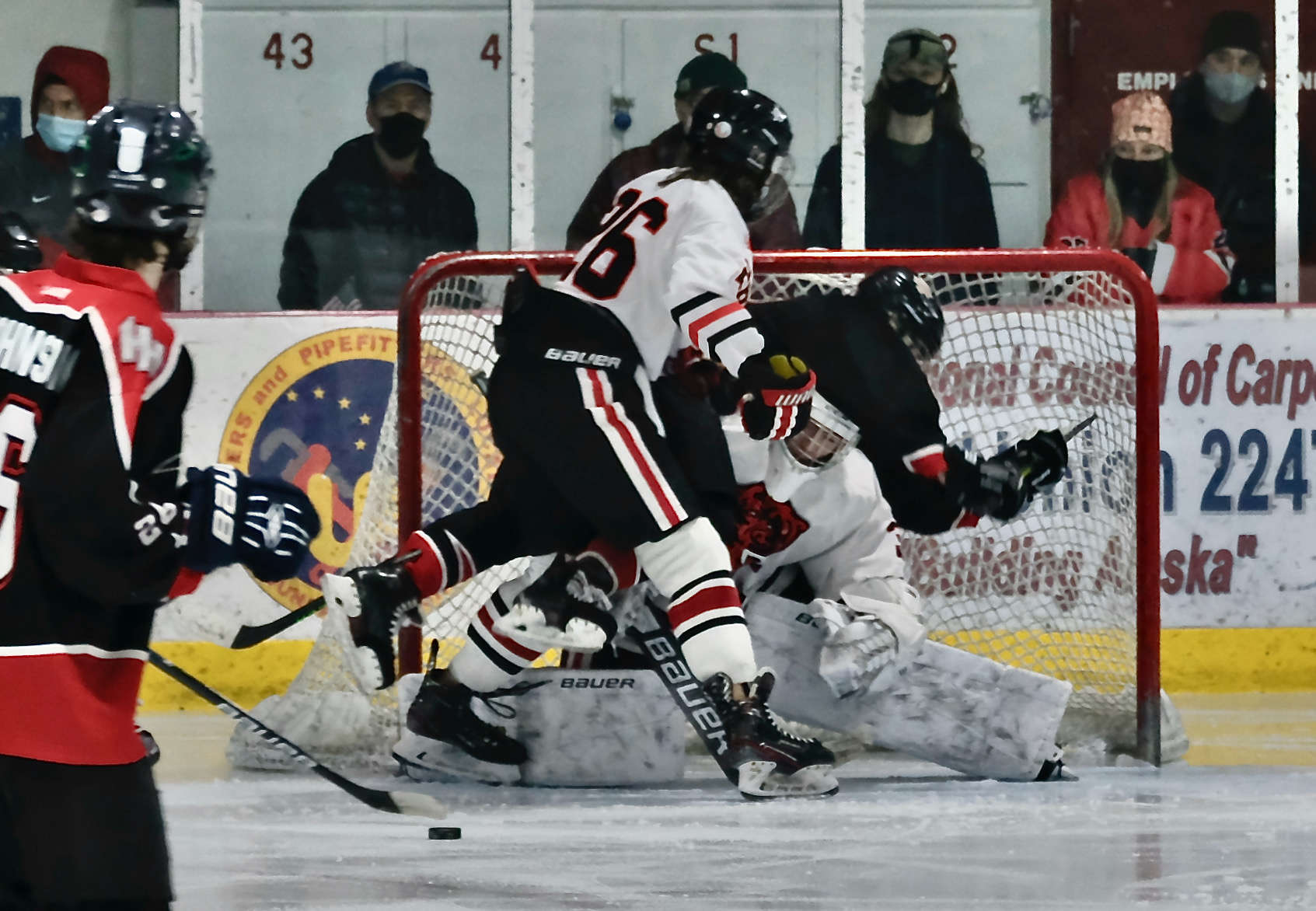 “No, not in my whole career,” Sooter said Saturday. “Never. I was going into it pretty confident though. We weren’t the best last night but I wanted to get it better tonight. I’m proud it turned out the way it did.”

Sixty-three of those biscuits were never cooked. Some hit his breadbasket, or pinged off iron. Some he deflected and whacked into side boards. Some were skillfully nestled in his mitt and one may have battered his bucket. But no matter the lumber that thundered black pops of lightning at him, Sooter said he never felt alone.

After an hour of pre-game senior night festivities, 45 minutes of regular game time and another half dozen of overtime skating, the Crimson Bears defeated Houston, handing them their first conference loss of the season.

Houston registered the first puck on the score board. One of the 21 shots in the first period that they put against Sooter’s net found a path in with 6:33 remaining. The Hawks’ Broday Richard did the honors, assisted by Philip Kuzmin.

JDHS tied the score at 10:19 of the second period as two more underclassmen had their leaders’ backs. Junior Lake Bartlett found a dirty goal, assisted by freshman Dylan Sowa.

JDHS Coach Luke Adams described the play as a “hard work goal,” in which sophomore Caden Johns pressured the puck behind the Houston net creating a turnover and Sowa kept the puck and made a hit on a Houston defender, throwing the puck into the front of the net where Bartlett was there to bury the goal.

Houston would sneak one past Sooter with 5:11 left in the second period, one of their 17 pieces of hard rubber thrown at his little curtained house. Hawks forward Andrey Reutov put it in, assisted by Brody Richard and Afanasy Efimov.

JDHS senior forward Joey Meier tied the score at 2-2 at 10:26 of the third period, slapping a hard liner straight to the back of the Houston net unassisted.

Adams said: “Meier created a battle in the corner” and won the puck, throwing it up to the blue line where senior captain Sam Bovitz took a shot with Meier screening the Houston goaltender and beating him clean.

That meant Sooter and the Crimson Bears would be skating against a very desperate Hawks team for a substantial remainder of the period.

Fifteen final regular time shots flew at Sooter, and 15 were left homeless as five helpless Hawks fluttered around on the ice.

“It’s always good to play with the team in a last home game win with all the guys and girls and play all in,” Bovitz said. “Just play and have fun.”

“Early this week Brayden played amazing,” Bovitz said. “Mason is playing amazing. It’s great support to have our goalies play like that. It’s good composure for all the team to keep strong.”

In the extra time both the Crimson Bears’ Sooter and Houston goalie Ryan Preboski had two shots put at them, but Sooter stopped both and Preboski just one.

Coach Adams said the team “knew we had a chance to win the game at the start of overtime and we just had the feeling like it was our night.”

In that overtime score the Crimson Bears’ Bovitz won the puck in the neutral zone. Bovitz created time and space to beat a defender wide and moved the puck over to Meier, who drove to the net. On the rebound Caden Johns dropped in from the slot to put the game away.

“This meant a lot to the team since it was the last game of the season,” Caden Johns said. “Home game for the seniors and the rest of the team. It was fun to play with my brother this year and playing with this team is special. It is definitely going to help build our team for next year. Everyone’s excited but it was a team effort, especially for our goalie Mason today.”

Crimson Bears senior sibling Colton Johns was emotional about the goal and the win.

“It means so much,” he said. “It is really.. I have no words for it. It’s one of the greatest things that has probably happened in a while. And for the fact that it was scored on by my own brother, I’m so grateful for that. I don’t think I would want it any other way.”

As far as family bragging rights?

“Oh, my brother!” Colton Johns said. “I am sure that is going to be at his wedding someday. I’m never going to let him forget that.”

The game was physical but played well with fast paced action.

“Big physical game,” junior Brandon Campbell said. “It feels awesome to close out the season with a win. And especially against a hard team and in a well fought victory. It’s amazing. Hopefully we get to go to state and show our worth there too.”

Campbell tallied two penalties and senior assistant captain Dylan Murdock two as they defended their teammates against Houston’s lines. The Hawks had an interference call in the first, high sticking in the second, roughing and cross checking in the third and hooking in the overtime.

“Oh, I’m stoked,” Murdock said. “That’s the No. 1 team in the state and we beat the in overtime thanks to our goalie and how we were playing. It’s just phenomenal. I’m speechless. We had to leave everything on the ice. I kept saying on the bench, ‘Last few minutes boys … leave it all out there.’ And they did exactly that. Caden scored, just amazing. And Mason kept us in that game the whole time. It’s just awesome to see.”

“Obviously us, right,” Murdock said. “We left it all out there. Everyone’s whupped but just so excited with what’s left to come at state.”

An overtime win on senior night happened only once before in Crimson Bears history. In 2007 senior James Gamez scored the winner.

“That’s a lot of memories there but this group earned it,” Adams said. “They deserved it, played an outstanding Houston team but we told the kids if they believe, we believe in them, and they did and they took over and played a great game. Outstanding effort by everybody. Obviously our goalie was pretty outstanding. We’re just proud of this whole group. I’m glad they finally got that feeling of victory their senior year that they have been waiting for. We’ve felt like we have had it right on the edge. Today I really feel the kids put a little more trust in each other and what we were telling them, how we can compete and find a way to win. Even though we lost a couple defense men to injury, kids stepped up. The sacrifice is what we always talk about. Credit to all of our players and all of our seniors especially because they left everything out on the ice today, and what a way to go out.”

The state tournament is Thursday through Saturday at Wasilla’s Menard Sports Center. JDHS is in fifth place in the Railbelt Conference but is a strong contender to earn an at-large bid into the state playoffs, especially after defeating top-ranked Houston. 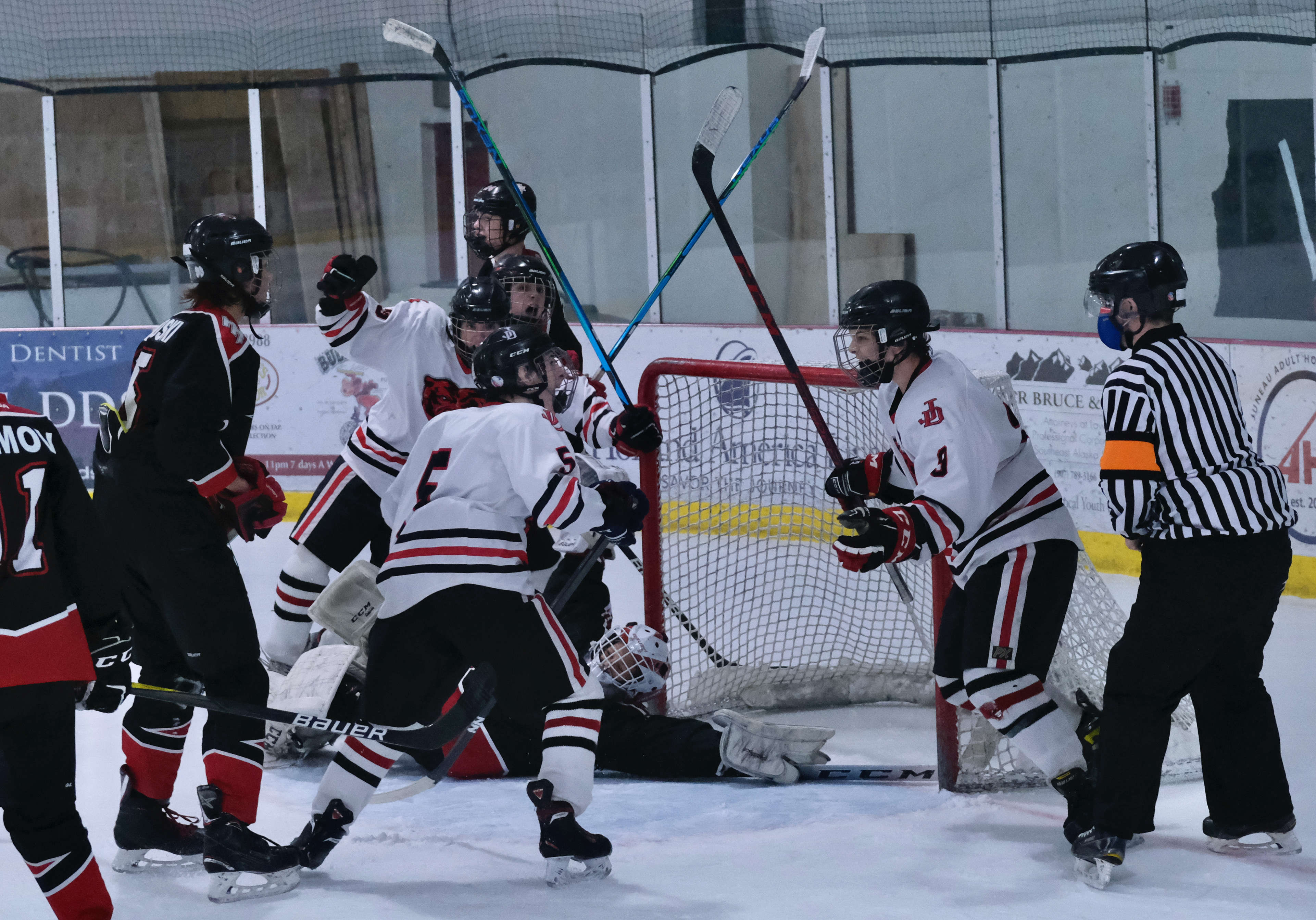 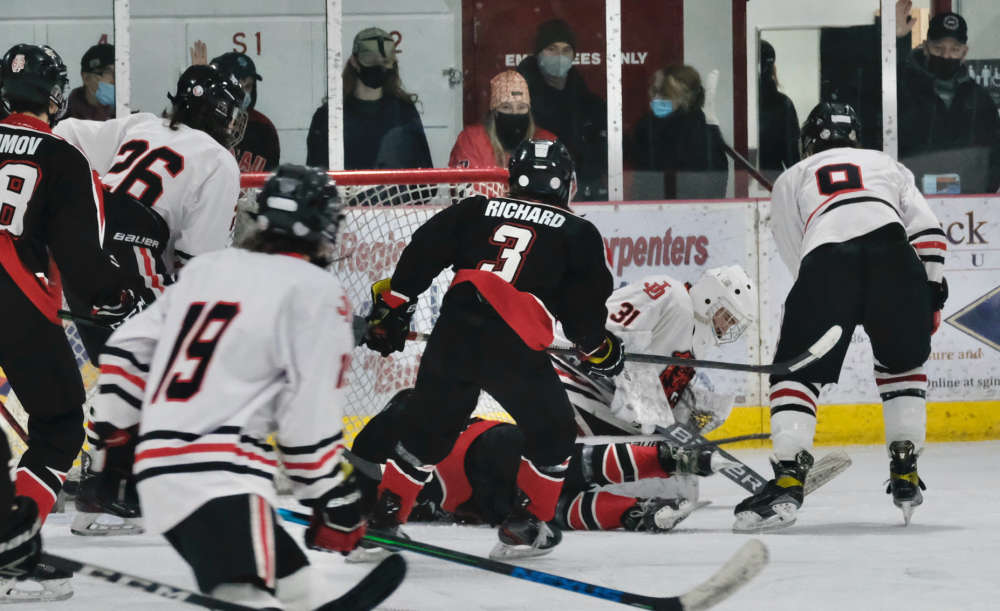