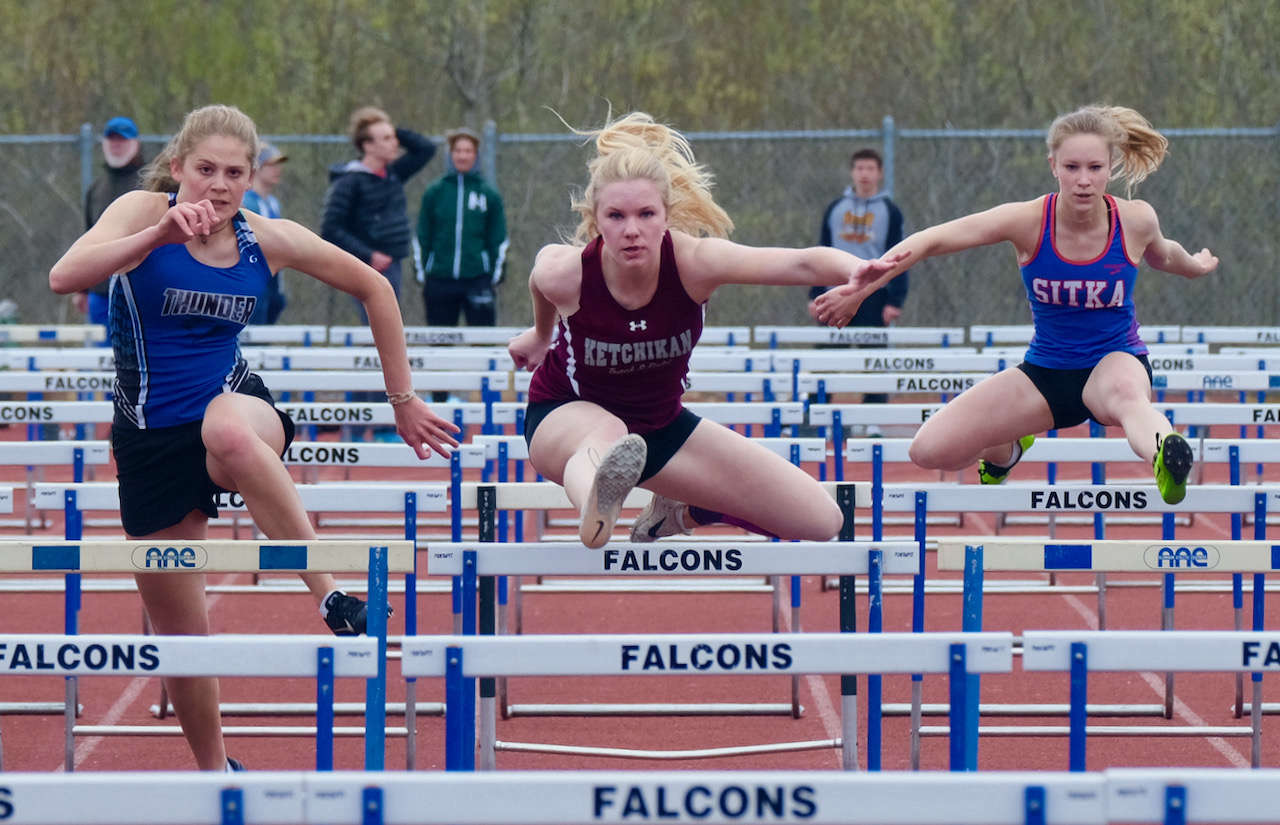 “I just think it was a great atmosphere,” Juneau-Douglas High School: Yadaa.at Kalé coach Jesse Stringer said. “We were really glad to have teams from Gustavus and Craig visiting, that was really neat to see those two small towns as well as Yakutat and Petersburg and Haines. We had nine teams and four to 500 hundred athletes competing. It’s a lot of fun when the meet is big and music is playing and people are having fun just racing…”

One of the quickest times of the meet was a new JDHS school record in the girls 4x100 relay and the fastest time in the state this season for that event.

“I think it is really exciting,” JDHS senior relay team member Trinity Jackson said. “I definitely didn’t expect it. I thought we all ran really good but I didn’t know we ran that good… For the start of the 4x100 it is really important to get out of the blocks fast so I can give that head start to the next three people…”

Jackson leapt off the blocks to put a baton in the hand of classmate McKenna McNutt who raced it ahead to junior Skylar Tuckwood who touched it into the grasp of senior Cosley Bruno for a finishing line time of 51.97 (see a separate story at KINYradio.com and 107.9 The Hawk).

“I wasn’t really expecting it,” McNutt said of the record. But it feels really cool. That’s kind of been like a little goal, a hope thing… to get my name on the Leadership Board…”

“I didn’t really expect us to be super good or at the top,” she said. “So it was a really big surprise that we are… I’m the third leg and it’s on the corner, personally I can’t really do straight stretches that good… I think the straight stretches for me, like I can just see the finish line for a really long time and so the corner kind of distracts me from that.”

Bruno said she was excited by how fast the team was.

“Every single day in practice we are pushing each other and racing against each other,” she said. “I think it is awesome to break a record like that and be a pretty fierce competitor up at state this year with that relay team.”

Bruno said her mindset for the anchor leg is “as soon as I get the baton I just go. There is really no thinking when I am out there. It is just get the baton and cross the finish line.”

The time is the fastest in the state this season and broke the 2001 JDHS record set by Adriana Rodriguez, Rachel Chenoweth, Emily Krehlik and Sara Ballard.

“They buried the record,” coach Stringer said. “Almost by a full two seconds… the old record was so good I didn’t even have it on the radar.”

“If I had to vote for an athlete of the meet she would have my vote,” JDHS coach Stringer said. “James (Connally) and Cosley (Bruno) both really led the team, which is great to have the sprinters leading the pack…”

“It’s great,” she said. “We haven’t had this in, like, three years or however long and it’s nice to actually all be here. I just wanted to do well and not get hurt.”

“It was okay,” Welling said. “I matched my PR from last year which is a good start but I want to do better. I don’t really love how it ended with a scratch but… I think just working on my form and my timing because I need to work on staying upright for longer so then I can get the right angles for getting over the bar instead of turning to early.”

TMHS senior Katie Ortega, juniors Aliyah Overturf and Maya Chaskin, and sophomore Sophia Owen were the only entry in the 4x800, hitting 12:15.00.

On the boys side Thunder Mountain senior Matthew Johns used every inch of four laps to catch and edge Petersburg senior Uriah Lucas in the 1600 meters. Both runners leaned at the finish line with Johns earning a PR 4:42.81 and Lucas a PR in 4:42.84.

“We started out really fast,” Johns said. “I like to keep my splits any where from 1:09 to 1:12 on each lap and our first lap was a 1:04, 64 seconds, so I came across and I was pretty tired in that first lap… I tried to stick with that just to stay with him. My strategy has always been to just pass them right at the end, try to stick with them and then use my kick at the end…”

Johns said the community and alumni invitational two meets ago was jarring.

“When the older guys from JD ran, that was a big eye opener,” he said. “Just seeing how fast they were, the alumni. Fastest runners in, like, JD history but super cool to see younger kids and me keeping up.”

“Just keeping consistent,” Lucas said of what was key for his run. “I felt like I was going a little hard in the beginning. And then I was like, just screw it, I might as well pass him… I passed him. It’s kind of fun. You push against him and see if they respond and he had a pretty good response but I was able to foul away from him… I like it. It’s nice to have other guys who care about it and who are willing to push because I have trained a lot by myself and it is just nice to have competition.”

“It was pretty fun,” Connally said. “It was nice to have a full meet to participate in and to see all the teams there was nice…”

“I wasn’t jumping as high as I need to,” Rhoads said of the high jump. “So I was trying to pump myself up out there, get higher.. but I think I got it. Regions, state, I think I got it. Six feet, you’ll see it. This is a personal record, five-10. Southeast meet record is, like, somewhere around six-four. I have time, that’s a senior record, I’m only a sophomore…”

Rhoads said the large field of athletes was an added bonus.

“It’s really cool,” he said. “The Ketchikan invite meet was nice jumping with a lot of people… and seeing all these people come out here, it was a lot of fun jumping with everyone, like that Petersburg kid Mike (Durkin, a senior) and Chase (Darbonne, a junior) from Thunder Mountain, those are really fun guys to jump with.”

TMHS senior Mathias Wiederspohn won the shot put with a PR 38-04.50 and Haines junior Eric Gillham won the discus with 121-02. 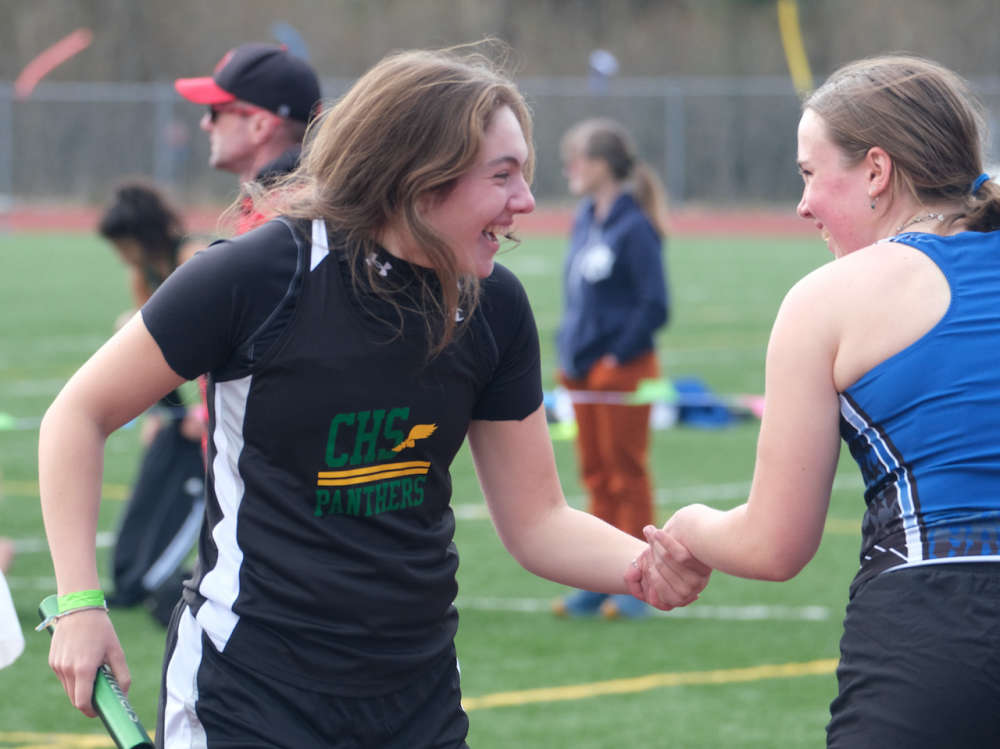