The Teammate He Never Met 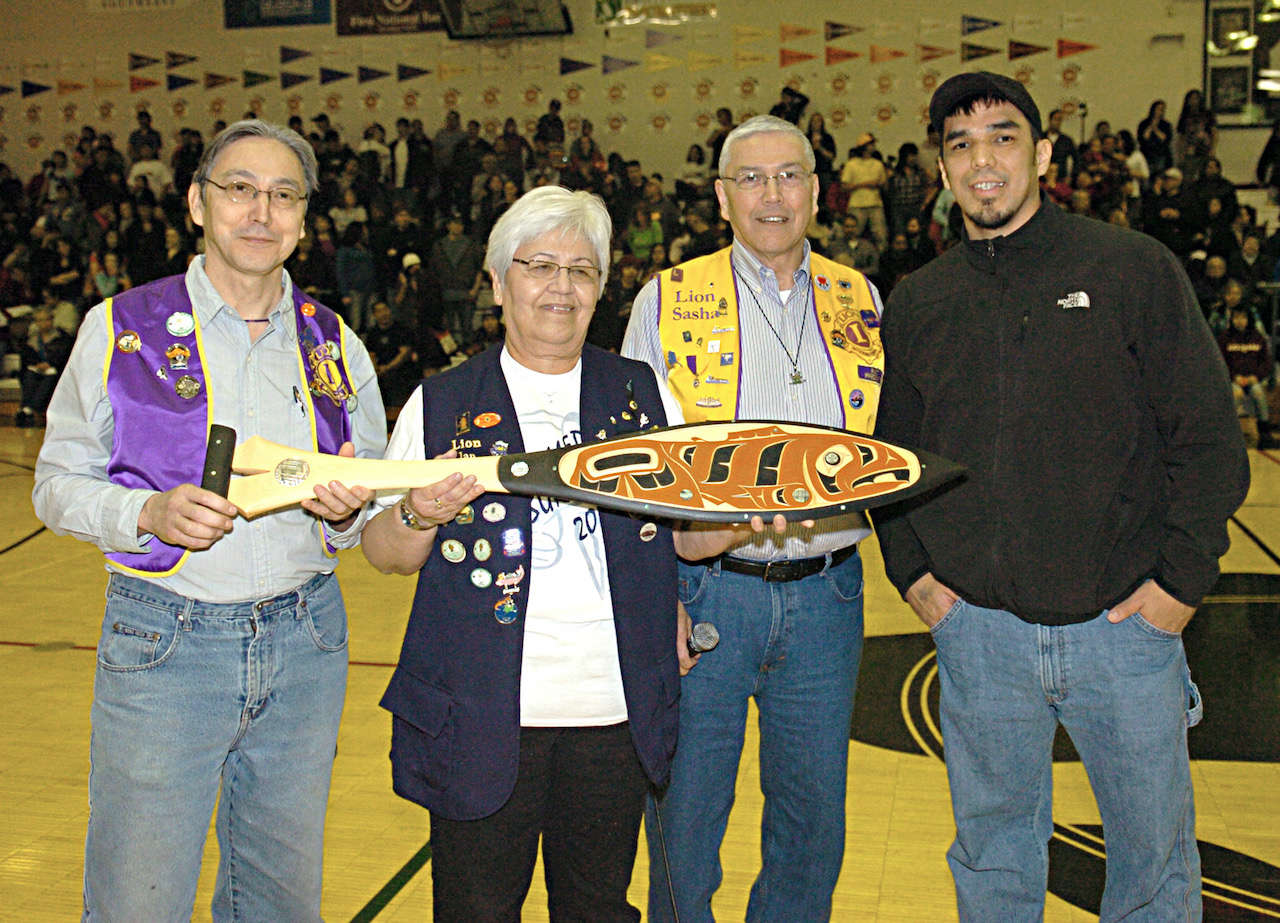 Ross Soboleff, Janet Burke and Sasha Soboleff are shown with Tom Booth, at right, and the paddle he carved in dedication to their farther Dr. Walter Soboleff at the 2012 Gold Medal Basketball Tournament. (Klas Stolpe)

The letter to Metlakatla’s Tom Booth began: “I saw the article about you and it touched my heart.” The letter had been opened already, as all mail is when the recipient is incarcerated. However, this letter had a return address of Dr. Walter Soboleff.

Soboleff had read a newspaper article I had written on March 7, 2011, that quoted inmate Booth from inside Lemon Creek Correctional Center.

The article mentioned Booth’s fire to get his life in order, rejoin his Native culture and play in the Gold Medal basketball tournament.

In the piece Booth had mentioned reading about Soboleff and the tournament and having a desire to one-day play there.

“He spoke about religion,” Booth said in 2012 of the letter. “That none of my goals could be met unless I set my heart and my mind to it. He commented on the things in that article.”

The first letter from Soboleff was short. Wishing him the best and assuring that there were people out there rooting for him.

“I was shocked to get it,” Booth said. “So I wrote him back and I sent pictures of other stuff I did outside of basketball.”

While basketball opened their communication, Soboleff began to take an interest in the rest of Booth’s life.

“I began to realize if I set my mind to it I could have a pretty good life,” Booth said. “I felt like he was on my team.”

Watch one of the consistently successful teams at any level, even Gold Medal Basketball, and you see good teammates move together, almost like weavers, bringing the warmth of their community into a wearable excitement that can wrap around cultures and step out into daily life.

He doesn’t want to own the basketball, or beat his chest after a basket, or stand over a vanquished shooter whose shot has been displaced into bleacher row 15 seat 235.

Instead he sets a solid screen, hustles back on defense, and extends his large Tsimshian carvers hand to help an opponent up to their feet again.

Booth has always loved the game and the game loved him back.

No matter what number was on the uniform, his play was always for the color of the jersey.

Even when the game was a half-hour long recreational break from the rigors of a correctional institution.

“I played my best basketball inside,” Booth said. “You don’t even know.”

Just like a basketball court, in prison there is no deceiving.

You are there for a reason.

Your body and mind will either continue in the game or you will be rendered just another player unwilling to be a man and accept his role.

“The things I could do,” Booth said. “Unfortunately some pretty good players came through jail. We had some great matchups. If we only had game films from inside Gold Medal would have been pretty impressed.”

Prison guards and inmates would line the court to watch some of his contests.

Sure, there are times when concrete walls and razor wire don’t always allow multiple entertainment venues, but it was not uncommon for word-of-mouth to spread from the cell block to the cafeteria that “so-and-so” would be going up against Tom Booth.

“I could always play,” Booth said. “Unfortunately the only people that saw me in my prime were inmates and prison guards.”

In Southeast circles the names of good players bounce among communities like the beat of an ancestral drum.

They etch into the fibers of elder and youthful hearts alike, connecting past and future, giving hope and projecting calm.

Booth’s name was forged as an all-conference high school player for the Metlakatla Chiefs as a sophomore and senior.

As a freshman and junior grades and alcohol benched the phenomenal talent.

Graduation in 1993 included a full athletic and academic scholarship to the University of Alaska Fairbanks.

“I wish I could have lived the college basketball and academic life,” Booth said. “I instead chose to party.”

In 1994 Booth entered the court system.

“I made bad choices when I was drinking,” Booth said. “I wasn’t living my life right.”

Tom Booth’s son was 13 when Tom played his last minutes inside Lemon Creek for assault and domestic violence brought on by alcohol abuse.

Thirteen was also the age Booth was first caught drinking alcohol by his own father.

His son spent most of his growing time with a grandpa.

In the prison article Soboleff heard Booth saying, “My son visits the man who has been dealing with my stupidity for years… this has to be my last time…”

The letters from Soboleff moved Booth in many ways.

“I thought my life was over but his letters helped rebuild who I was,” Booth said. “My family too. I always have had the support of family.”

While in prison Booth would do 300 pushups day and night, squat garbage bags filled with water and run the prison yard to hold on to his sanity.

He reread the letters Soboleff had sent him.

He also immersed back into his ancestry and culture.

He had once studied under famed Tsimshian carver Jack Hudson and crafted alongside Tlingit carver Nathan Jackson.

He had always been good with carving tools and the Lemon Creek Correctional Center had a wood shop.

Booth stated at that time the inmates were his teammates now. “They have fears too.”

Booth’s fears included letting his family down again and the art works he finished inside were sent to his father who sold them to provide family income.

The authenticity of the carvings could be justified in the letters from Soboleff taped to his cell wall. The letters were better than a scholarship to a university or S.A.T. scores.

Tom Booth never got the chance to meet Walter Soboleff.

“He passed before I got out of Lemon Creek,” Booth said. “He had said he wanted to meet me at the next Gold Medal tournament.”

At that tournament he presented the JLCGMT and Soboleff’s daughter Janet Burke and sons Sasha and Ross Soboleff with a hand carved paddle in honor of Dr. Walter Soboleff.

Booth had completed the carving between games back in his hotel room. While other players on other teams frequented the nightlife, partying or not, Booth put his heritage to work, quenching his thirst in the shavings of wood that fell to the hotel carpet.

“Hopefully it will find its way to his new building,” Booth said.

That tournament featured the inaugural Walter Soboleff Award, the criteria for which involves volunteer work in the nominee’s community, leadership on and off the court, spirit, pride in community, motivation, conduct, sportsmanship and other personal traits deemed appropriate.

“Not a lot of people know how he reached out to me,” Booth said. “And what it has allowed me to do.”

Booth’s son played on the Metlakatla Chiefs basketball team and Booth was able to be a coach, a teacher, a carver, a father and a good teammate to his son.

His son was a taller yet slimmer version of the player his father was in high school.

Tom is Eagle clan and his son is of the Wolf clan, the clans of their mothers.

The two have had their contests on the court and in Booth’s carving work shed.

“One of my goals was to hopefully inspire my boy when he watched me play in the tournaments,” Booth said. “It really worked out great in that area. He never really got into basketball before. When I came home it just sparked a fire that I could not believe. It was my first real experience as feeling the pride of being a father because I wasn’t really a part of his life being in and out of the can (jail) all the time. I never realized how much that really affected his life… but it didn’t take him long to forgive either. Our relationship took off like it had always existed.”

As his son started to develop from a layup to a pivot and blocked shot Booth started to take him to city league games. One trip to Ketchikan saw Booth show his son that hustle is not just a moment in a game but 40 minutes of play. The points totaled over 60 and the stands were crowded.

“Boy he came home right after that and had a triple-double,” Booth said. “It was the little league and he was young and a head or two taller than anyone else but it was really neat to watch.”

That style of play carried on into high school play and father and son shared the journey.

The long absence of the father resulted in the son living with a grandpa who oversees the Town Hall gym where youth are scolded to not hang on the rims after dunking.

Booth’s son would spend some nights with his father and visit many relatives as his grandmother had 20 children and hung name tags near her door for all Tom’s aunts and uncles.

“My son texted me last night that ya-ya (Tsimshian for grandfather) scolded him for dunking,” Booth laughed. His son went on to become a captain on the high school team that season.

“As in anything else I was taught the old ways,” Booth said. “And as in anything else they develop new things to do and they have a plasma cutter so they are cutting native art designs out of steel. My son gave me a metal eagle head wall hanging cutout with the all the details of a carving. He is learning the old ways but teaching me new ones as well. He likes to come down to my shop and work some of the machinery and I teach him about the hand tools.”

Booth was college basketball material most of his life. That is gone now, replenished with another passion of a father.

“I have no real regrets,” Booth said. “The things I learned in there (jail), I never would have learned out here.”

A good teammate like Tom Booth has your back. You develop a history with them.

A great teammate, like Walter Soboleff, touches your past and gives you a future.