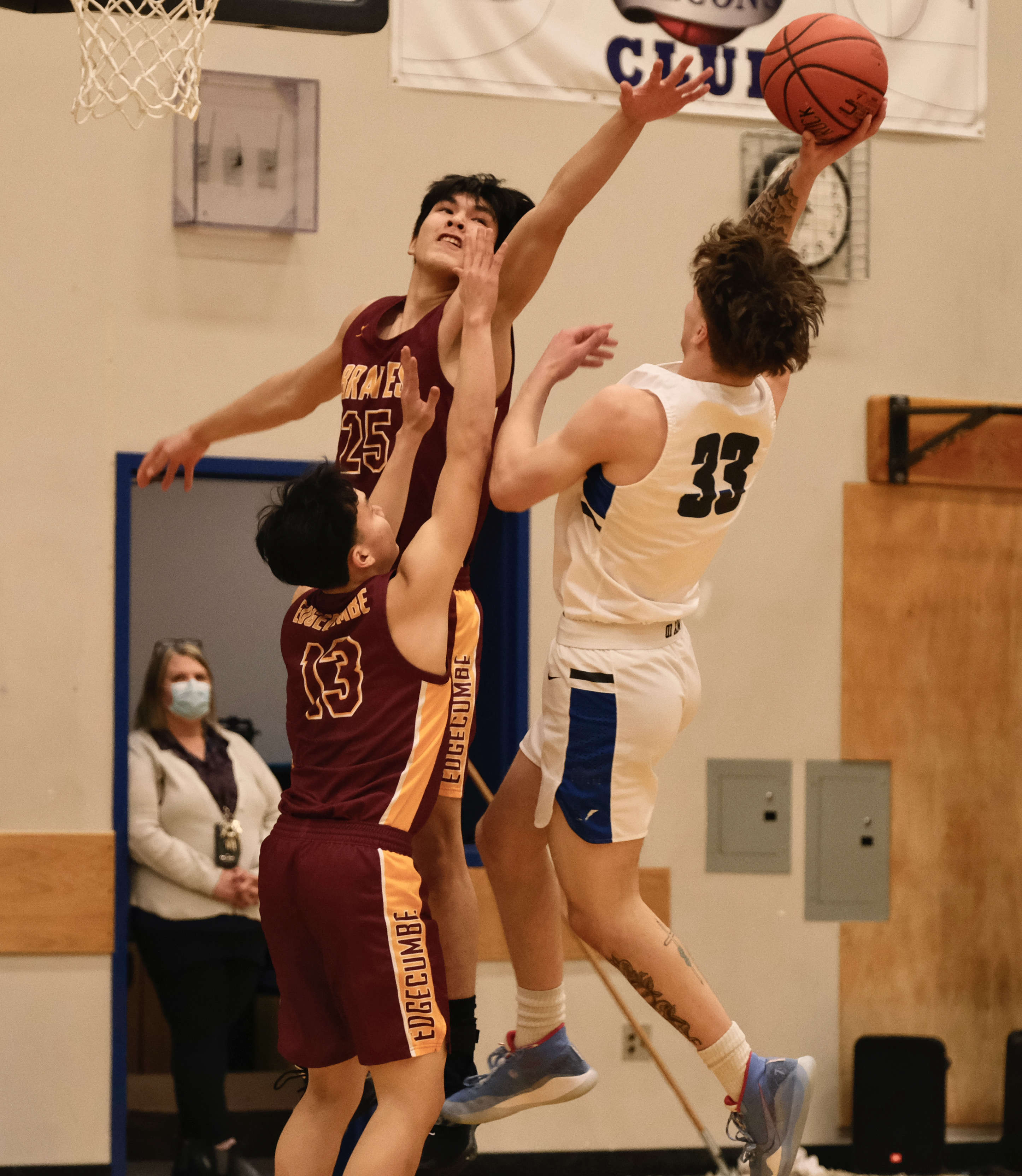 While Mt. Edgecumbe hit the opening shot, a deep three past the arc by sophomore Rylan Armstrong (of Nome), Thunder Mountain followed with a 15-0 run by the sophomore trio of Thomas Baxter, James Polasky and Samuel Lockhart off a Falcons pressing defense that forced two steals by senior Wallace Adams.

TMHS called the press off midway through that run and led 20-7 after eight minutes of action.

“They came out and jumped all over us and we didn’t respond very well,” Mt. Edgecumbe coach Archie Young said. “Coach Blasco is a first-class act. He took his press off real quickly and allowed us to work on some things and him to work on some things. We played better in the second half but a lot of that was how they played. Like I say, he’s first class and I appreciate him giving us the opportunity to work on things, too.”

A key change as the second quarter opened was a two-three zone defense that Mt. Edgecumbe brought to the floor.

The defensive look stymied Thunder Mountain for roughly two minutes but the Falcons found the deep wings open and hit five shots past the arc, one each from Lance Nierra, Matthew Hartsock and Isaiah Nelson and two in a row from Lockhart to close out the quarter with a 37-13 lead.

Mt. Edgecumbe junior Ranen Wassillie (Wasilla) and sophomore Denin Preatice (Koyuk) each had three points in the second quarter for the Braves.

“Just continue to improve,” Blasco said. “These are mid-week games and we want to make sure we are rotating all the guys. Get some rotational practice, game situational stuff.”

The Falcons’ Baxter and Lockhart scored to start the second half for a 42-13 advantage.The Braves answered with 11 points of from Wassille, Preatice, senior Shane Angnaboogok (Eagle River), Armstrong and then Wassille added a deep three to make the score 42-24.

The Falcons’ Adams notched an old-fashioned three-point play, getting fouled on a rebound shot that scored, and Lockhart hit his traditional catch-and-shoot from past the arc for a 48-24 lead. But the Braves’ Wassille hit his second shot past the arc, Preatice scored in traffic and Armstrong hit two free throws for a 48-29 tally.

TMHS senior Noah Chambers scored his first varsity bucket of the season next to give the Falcons 50, and MEHS’ Wassille closed out the third quarter inside to give the Braves 33.

“I’m glad everybody got on the floor,” Blasco said. “Noah Chambers got his first points playing basketball with us here this season. Just trying to make improvements. They play a lot of zone, something not a lot of teams do in our conference, so just getting some practice against that. We tried to practice it the last few days but still it was just a little bit different. And it is easy to become a perimeter team. So we’re just trying to work on some sets and get better at playing against that two-three zone.”

Mt. Edgecumbe had skills they wanted to polish as well.

“For us defensively it’s simply we put it down to four things,” Young said. “We want deflections, we want to take charges, we want to rebound and then we want to get steals. And we think that those are effort things that we can control, and we didn’t do a good job in the first half but I thought the kids worked harder at it in the second half.”

Both sides continued to rotate players through the fourth quarter.

Falcons senior Matthew Johns hit the stanza’s first basket and Braves senior Keenan Kashevarof (Anchorage) matched it with two of his nine points in the quarter for a 52-35 game.

TMHS sophomore TJ Guevarra put a shot in past the arc for the Falcons 59 on the score board.

MEHS’ Kashevarof scored and was fouled and made the free throw, and Wassillie and Preatice brought the Braves' score to 48.

The Falcons’ Nierra traded baskets with the Braves’ Kashevarof for a 61-50 tally and TMHS sophomore Owen Adams scored point 63 with 12 seconds left, but MEHS junior Jaden Andrew hit at the buzzer for the final 63-52 score.

The Falcons have a rematch at 6:30 p.m. Thursday against the Braves, and travel across town to Juneau-Douglas High School: Yadaa.at Kalé on March 4-5. 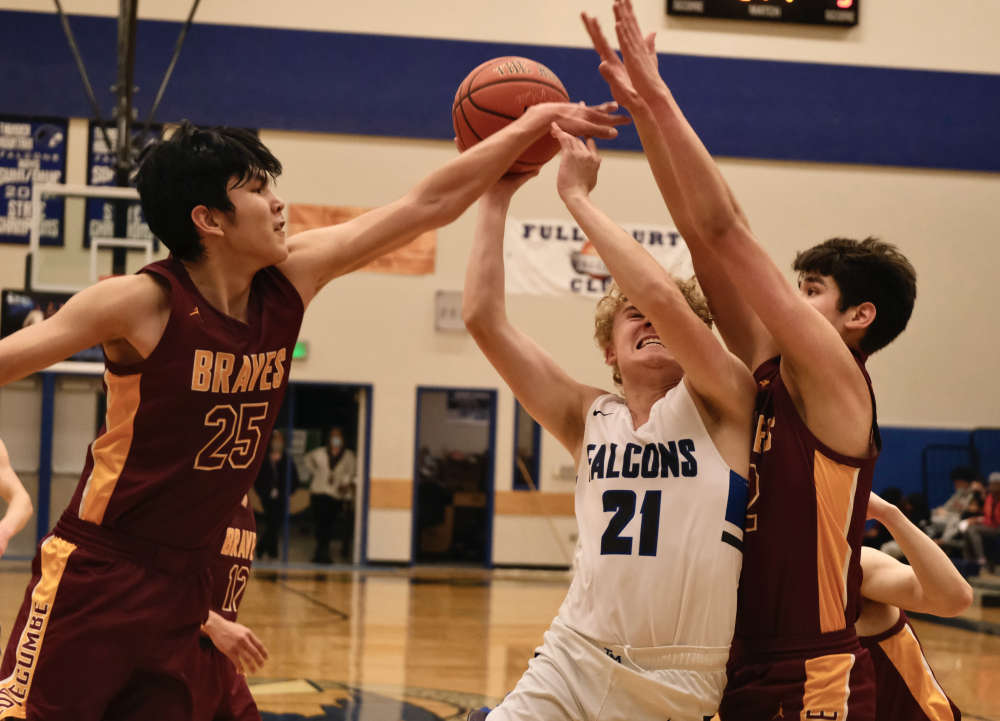