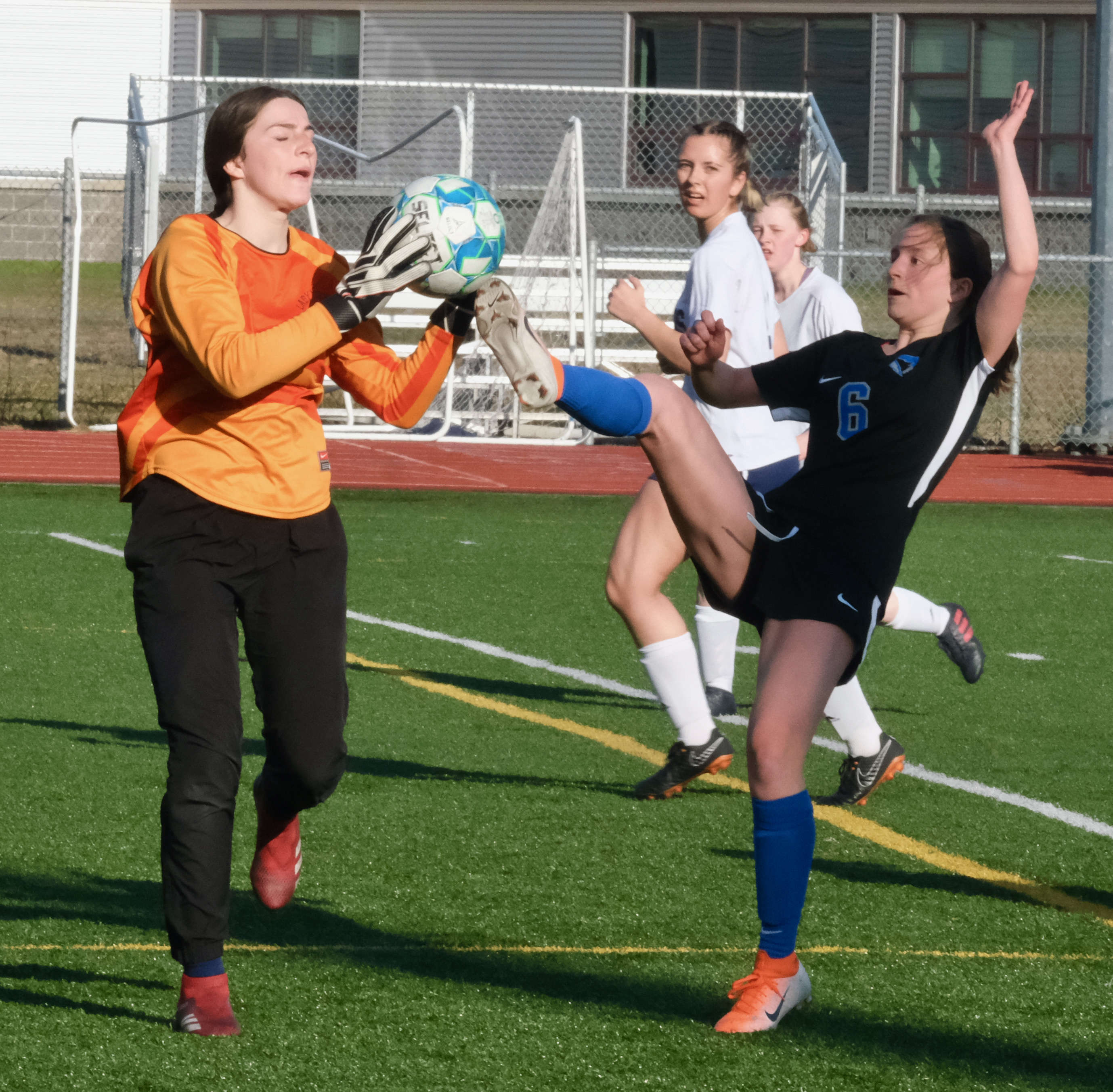 Maryellen Bryson (6) tries to earn a ball from Homer junior goalkeeper Felicia Weisser during the Falcons draw with the Mariners on Friday on the TMHS pitch. (Klas Stolpe/KINY)

Juneau, Alaska (KINY) - The Thunder Mountain High School girls soccer team played even on the score board against the visiting Homer Lady Mariners on Friday earning a 0-0 draw despite having the advantage in possession and in shots on goal.

TMHS senior Jade Blackwell put the first ball at the Homer goal just one minute in, classmate Molly Brocious added two more in succession within six minutes and classmate Maryellen Bryson tried two of her own in the 12th and 13th minutes.

“After playing JD we were definitely trying to focus on taking more shots,” Brocious said. “And just firing and firing hoping that one goes in eventually. Unfortunately today one didn’t but we are going to keep trying… Homer has a really good defense… we were trying to pass it around and, again, just taking those shots from either in the box or outside the box, just anywhere we can.”

In Friday’s game the Falcons only allowed one Homer shot on goal in the first half while putting 13 at the Mariners net.

In the second half the Falcons had 12 shots, unofficially, to Homer’s four.

“I felt like the girls dominated the game,” TMHS coach Cindy Eriksen said. “They played really well and we took some things that we felt were shortcomings in our JD game and we applied that in practice and you could tell they really took that away from practice… passing sequences and different defensive formations and I thought the girls applied it well…”

Homer coach Michael Tozzo said the Lady Mariners, who also played at Kayhi to a 1-1 draw on Thursday, and lost to JDHS 5-1 on Saturday, were looking for experience in the Southeast road trip.

“The biggest thing we are wanting to take away is just the opportunity to get better,” Tozzo said. “We don’t come down here saying ‘hey we’re going to win this game, we’re going to win this game and this game…’ It’s just all about how can we keep preparing ourselves for our conference round back home, and we have a game against Soldotna on Tuesday… before the game we talked about that is our next game, and this is just an opportunity for us to get more prepared for that game and I think today we did. We didn’t score any goals but that wasn’t always the focus especially in games like this, we wanted to make sure we kept a physical and well-coached team from doing what they wanted with us and I think we did a good job of holding them off… our defense played really, really well, like the middle of the field back to the defensive line played really well…we didn’t get the through balls we wanted… at half time we talked about if we don’t ever try it than we definitely aren’t going to have it happen, so we have to start trying a little bit and I thought we did…”

Note: Monday’s TMHS girls home game against JDHS has been postponed to May 12. 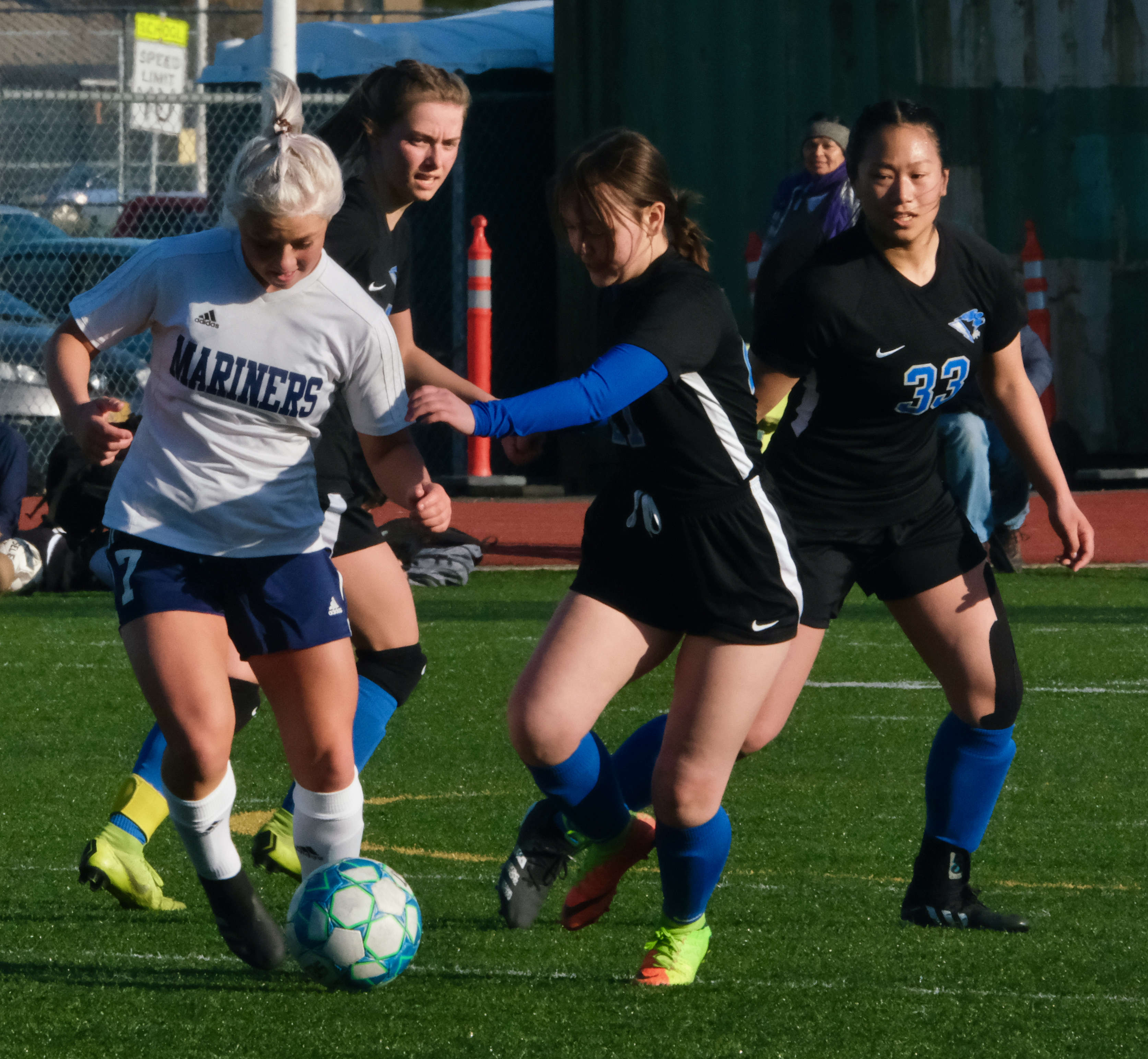 Above - Thunder Mountain High School junior Lillian Palmer Stears (27) tries to earn a ball from Homer senior Sela Weisser (7) as Falcons seniors Kiah Dihle and Molly Brocious (33) cover during the Falcons draw with the Mariners on Friday on the TMHS pitch. (Klas Stolpe/KINY)