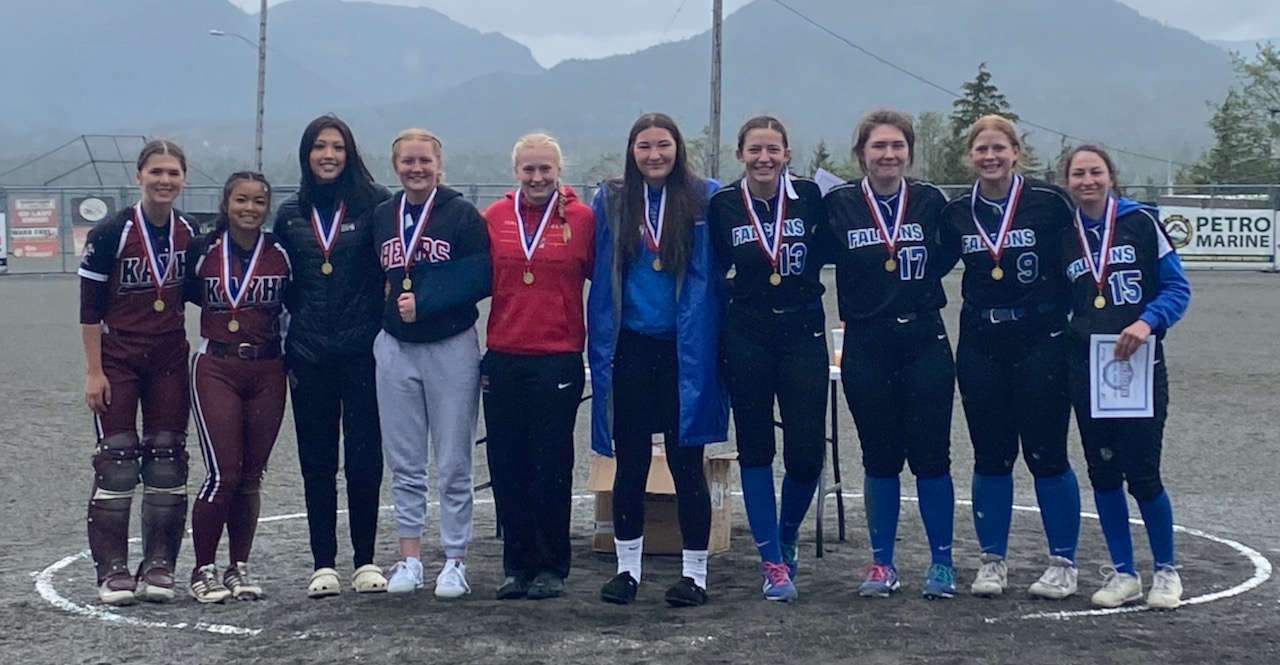 Juneau, Alaska (KINY) - The Thunder Mountain High School softball team placed second in the Southeast Conference Region V tournament at Ketchikan and will represent the SEC along with Ketchikan at the state tournament in Fairbanks while the Juneau-Douglas High School: Yadaa.at Kalé girls had their season end.

The Falcons had already clinched the second-seeded berth to the state tournament by virtue of winning the season conference standings. A Region V tournament title would have been an added bonus but the Falcons fell to Ketchikan in the championship game 7-3 on Friday, giving the Lady Kings the title and the SEC top berth to state.

“I’m really happy with how we ended the region tournament,” Strong said. “But we started a little slow. And Sitka just came out with guns blazing. I gave them every pitcher I had and all my pitchers were having a pretty good day but they hit everything we threw at them.”

The Falcons opened regions with a 10-2 loss to Sitka while the Crimson Bears opened with a 5-4 loss to Ketchikan.

Against Sitka, TMHS seniors Riley Harp and Sydney Strong had one run batted in apiece. Harp and seniors Tyler Johnson and Anne-Alese Rentrop and sophomores Jack Lovejoy, Jenna Dobson and Ashlyn Gates had one hit each. Dobson and Lovejoy scored one run apiece. Gates started in the circle and went 3.1 innings with three hits and one run allowed, struck out two and walked two and held a 2-0 lead. Senior Rileyanna Payne went 1.1 inning with four hits and four runs allowed and one strikeout. Harp allowed one hit and one run, struck out one and walked three. Lovejoy allowed three hits and four runs, struck out two and walked one.

Against Ketchikan, JDHS sophomores Tristan Oliva and Mila Hargrave and junior Zoey Billings had one RBI each. Oliva, Hargrave, juniors Anna Dale and Gloria Bixby and sophomores Kiah Yadao and Chloe Casperson had one hit each. Oliva, Dale, Chloe Casperson and freshman Milina Mazon scored one run each. Yadao started in the circle and went four innings with seven hits and three runs allowed. Hargrave went 2.1 innings with no damage and junior Amira Andrews went 1.2 innings with two hits and one run allowed.

Lovejoy pitched the full seven innings with eight hits and two runs allowed, striking out two batters and walking one.

Hargrave and Billings led JDHS with one RBI apiece. Dale had three hits, Oliva, Hargrave, Z. Billings, and freshmen Tatum Billings and Taiya Bentz one each. Oliva and Dale scored one run apiece.

TMHS then eliminated Sitka 12-5 behind Gates’ 2-4 day with two RBI and three runs scored. S. Strong had three hits. Payne, Johnson and Aliza Mesdag scored two runs each. Harp started and allowed three hits and one run, struck out one and walked one. Lovejoy went 4.2 innings with five hits and three runs and struck out three. Payne closed for two innings with one hit and two strikeouts.

In the Falcons championship clash against Kayhi, they gave up three early runs in the bottom of the first inning and pulled to within a run in the top of the fourth as Gates hit a shot over the center field fence scoring freshman Brianna Eakes, cutting the lead to 3-2.

Kayhi got a run back in the bottom half of the fourth and TMHS again pulled within a run in the top of the fifth as Payne sacrificed in Dobson.

TMHS put just one runner on base in each of the final two innings. Gates led the Falcons with two RBI, S. Strong and Gates had two hits apiece, and Dobson, Gates and Eakes scored one run.

Last season JDHS earned the top seed with the best season record and Kayhi won the region tournament, but the Crimson Bears took the state championship and the Lady Kings fell in the semifinals.

The Falcons open the state tournament in pool play action with North Pole and Homer on Thursday. Kayhi opens with Kodiak and Delta Junction. After pool play, teams are put into the tournament bracket for Friday and Saturday.