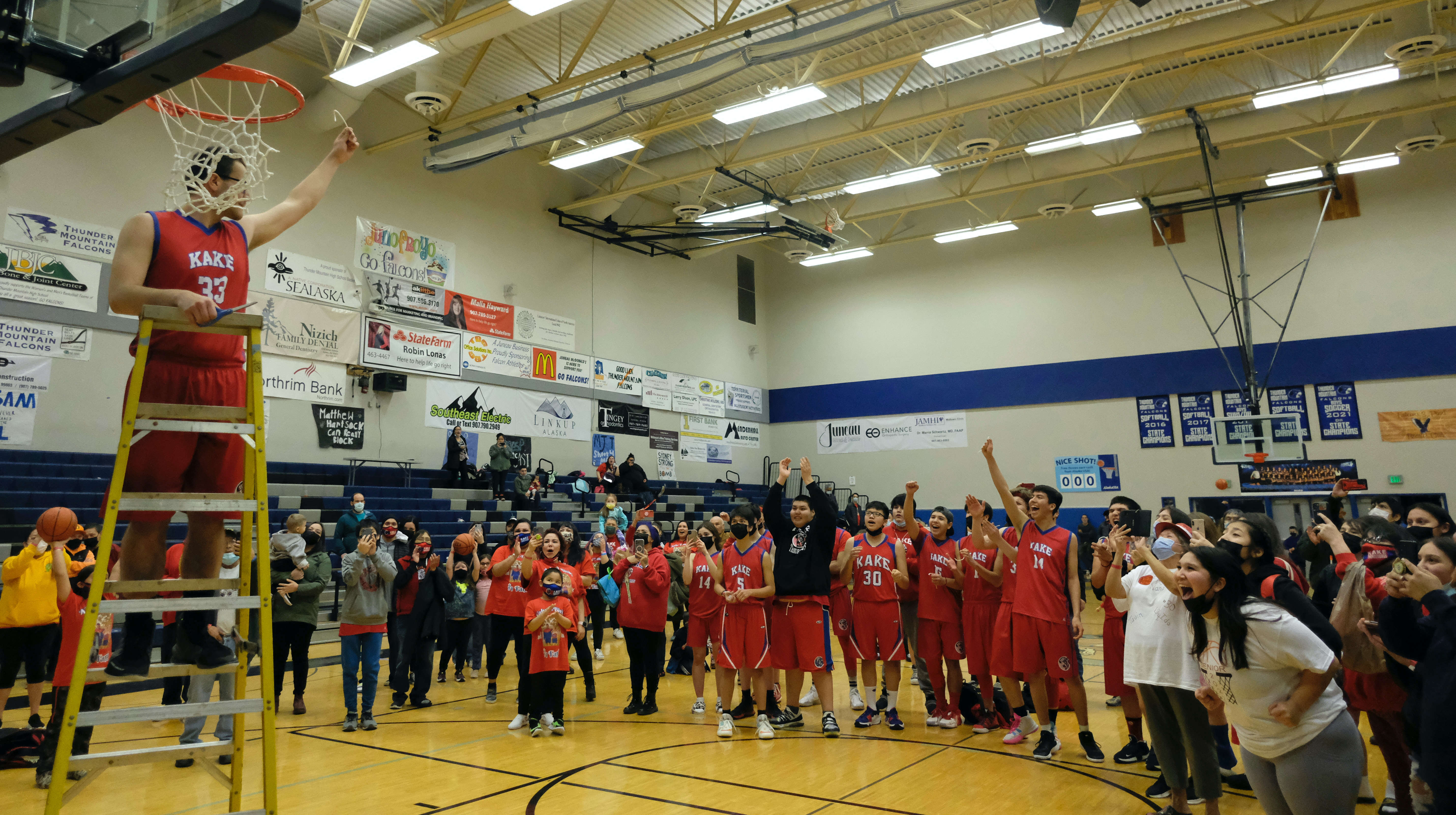 Kake senior Dakwaneek Crookes shows a piece of the Region V Championship net to teammates and fans after the Thunderbirds defeated Klawock 60-33 for the Region V 1A Boys crown at TMHS. (Klas Stolpe/KINY)

Juneau, Alaska (KINY) - The top Southeast Region V 1A boys championship team, the Kake Thunderbirds, will not travel to this week’s March Madness Alaska 1A/2A state basketball championships due to a COVID-19 outbreak in their community.

On Sunday the Kake City School District informed the Alaska School Activities Association of their decision to not travel to the state tournament in Anchorage that begins Wednesday.

“It is quite a bummer that we are not able to compete,” KCSD superintendent Rich Catahay said. “It was exciting to watch our boys, particularly this year. They play so hard, you would think they are next level in 2A.”

The Thunderbirds boys and girls teams participated in the Region V 1A Tournament at Juneau’s Thunder Mountain High School, March 2-5, along with teams from Angoon, Gustavus, Hoonah, Klawock, Skagway, Thorne Bay and Yakutat.

Upon returning to Kake some players and fans tested positive for COVID-19.

“The safety of our kids and the health of our town I think is priority one,” Catahay said. “And it has always been like that. When I told them that we can’t travel because of COVID and because of our outbreak, the boys took it not too kindly, but they were understanding. They knew that they needed to stay. That is the maturity that our program here has really built and that coach Ross (boys coach Anthony Ross) has really built with the boys. We always have the motto of having them be students first, then student athletes, and then champions. And that’s our goal always… students first, student athletes, and then champions and that’s always building upon itself… all of our kids here are very respectful and I am proud of them. I told them I will hold my chin up and they should hold their chins up as well because they are champions.”

Tournament mitigation measures required that masks be worn by coaches, spectators and players, though visiting teams had a choice to test within 48 hours prior to travel if they wanted to play unmasked; otherwise they would need to mask while playing in Juneau.

Catahay said the school followed tournament guidelines as well as their own mitigation procedures.

“Our teams did all the mitigations that we could do to prevent COVID,” he said. “We tested every day, even in Juneau… we tested to make sure no one was out there playing with COVID. It is what we do. Our kids were very meticulous. They were following everything in our mitigation plan. We want our kids to feel good about themselves, that is the bottom line. They are champions.”

ASAA executive director Billy Strickland said he was informed on Sunday that Kake would not be able to attend the state tournament due to COVID-19.

“ASAA will still be acknowledging them as Region V champion and a state qualifying team,” Strickland said. “I’m sure it is very disappointing for the students and the community. I don’t envy the community, or the school board or the superintendent or anybody who had to make that decision… I feel sorry for the students and families and coaching staff who had a great year. It was really a strong team. I think we had them seeded fifth and felt like they were a real contender. We really can’t imagine the disappointment, but I don’t think that should take away from their season. So when that occurred we were able to find a replacement team. That is now going to be Hoonah. So Region V will still be represented by two teams in the state tournament. But we feel Kake had a great year and this shouldn’t distract from that.”

ASAA first contacted the third place Yakutat Eagles to fill Kake’s state seed but Yakutat did not have a full team available. The Hoonah Braves were then contacted and accepted Kake’s seed.

A message left with the Yakutat school was not returned by publication time. Klawock placed second in the region tournament and is the other region boys team going to the state tourney.

The girls teams that qualified for state are Klawock and Skagway.

Thunder Mountain High School Athletics Director Luke Adams said he was unaware of any other teams who played in the region tournament testing positive for COVID-19.

The city of Kake is offering antigen tests to those who may have been exposed, are experiencing symptoms and for the elderly and immunocompromised.

“With winning the championship, having the opportunity to be very competitive up at state was absolutely a possibility,” Catahay said. “The town was very excited. They are obviously very disappointed but also a lot of folks here are understanding. On a side note we are in RED, we are remote learning temporarily until we get this outbreak subsiding and going back to where it can be controlled. We hope to be back in person, that is our goal.” 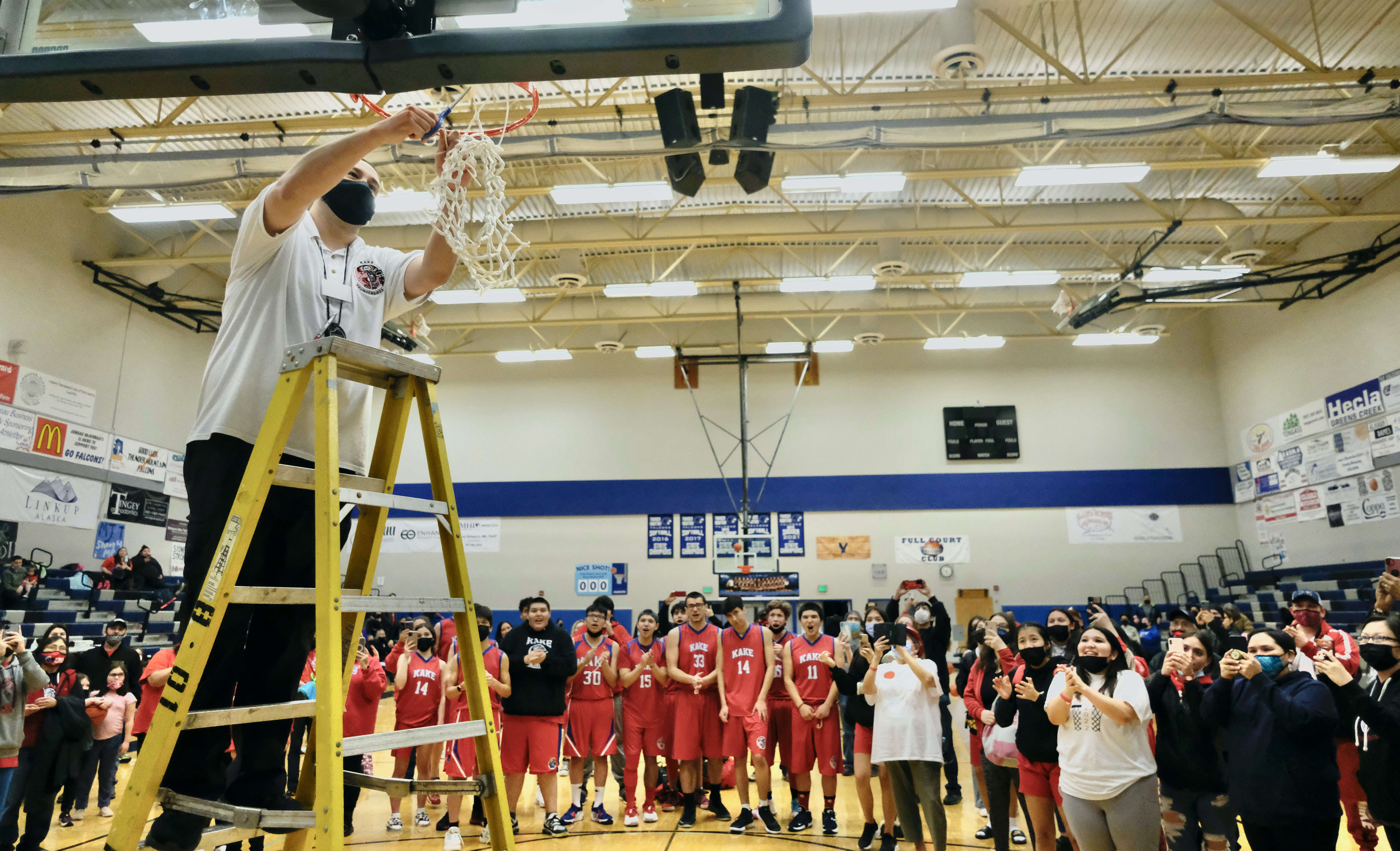 Above - Kake coach Anthony Ross cuts down the Region V Championship net after the Thunderbirds defeated the Klawock Chieftains 60-33 at the Region V 1A Boys Basketball Tournament at Thunder Mountain. (Klas Stolpe/KINY)