Track Teams Shine Under the Lights at Adair Kennedy

The Twilight Meet was first run last season as a morale booster to offset the COVID-19 restrictions athletes, school districts and sports fans were confronted with during the pandemic. The event proved so popular it is being included as an annual gathering.

“Last year we were just trying to throw together a meet, just to have a meet as we were having a tough time because of all the COVID restrictions,” Stringer said. “And it was so much fun we wanted to do it again… we were just looking for a good small meet under the lights.”

Both schools athletes warmed up together and cheered each other on.

Only four events were held. All were coed. For example, male shot put winner Mathias Wiederspohn, a Thunder Mountain senior, and female shot winner Mira Marthaler, a Juneau-Douglas senior, were not only throwing one after the other but also measuring other competitors throws.

“It was great to see both teams getting in there, warming up and competing against each other,” Stringer said. “I think the shot put action over at the shot put ring was really good and it was really nice to have multiple events going at the same time…”

Events running simultaneously as the shot put included the 100 meter dash (timed across five heats), the 1500 meters (a first for TMHS runners for school records), and the Sprint Medley Relay (relay legs of 100, 100, 200 and 400) that closed the meet.

“That one was just a fun foot race,” Stringer said of the relay. “Just a flat out foot race where we kind of relax on the rules a little bit…”

Results of the meet were not available by deadline.

Next up for track and field fans is the Guy Thibodeau All Comers Meet at 1:15 p.m., Saturday, on the TMHS Track.

The meet is open to community athletes wishing to challenge themselves against the Falcons and Crimson Bears or their own times, heights or distances. A $5 donation per event for community members at event sign ups will be split between TMHS and JDHS track teams. Sign up sheets will serve as heat sheets. All running events are run as finals - if more than one heat the top times will be compared for final results.

Above - TMHS senior Mathias Wiederspohn throws the shot on Firday at the Twilight Meet on Adair Kennedy Field. (Klas Stolpe/KINY) 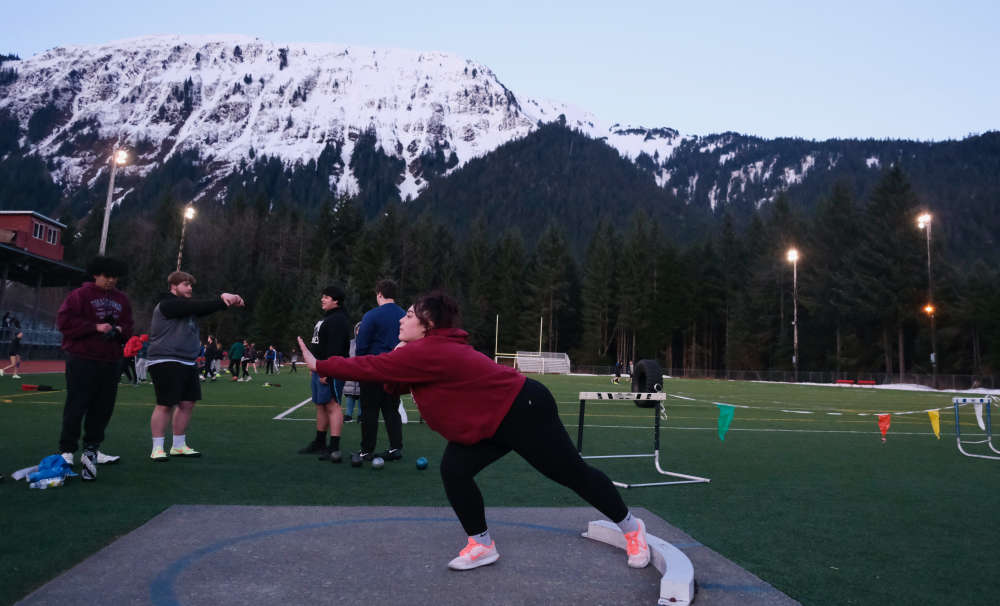