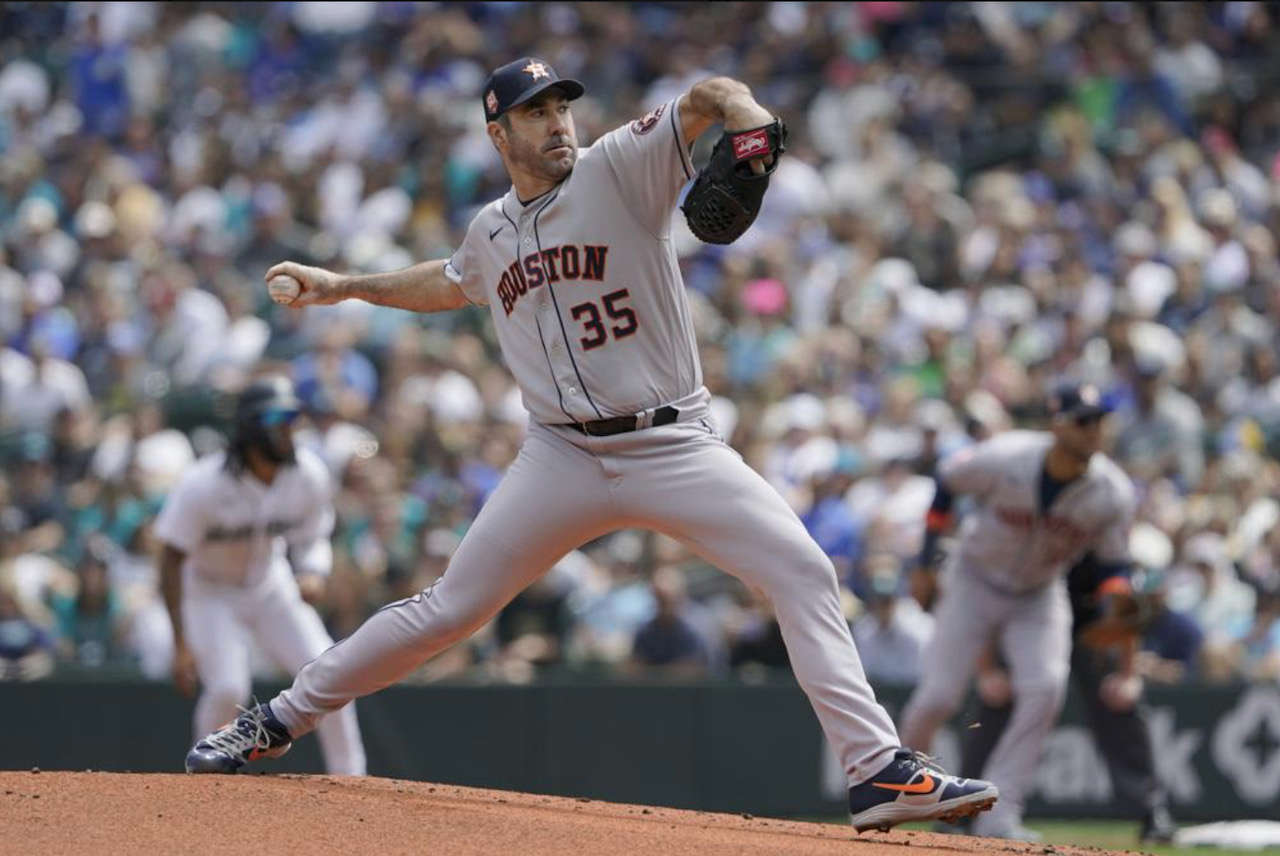 SEATTLE (AP) — Justin Verlander became the major leagues’ first 13-game winner, striking out nine and topping 99 mph in his final inning to lead the Houston Astros over the Seattle Mariners 3-1 on Saturday.

Verlander (13-3) allowed four hits in seven innings to win his fifth straight start and lower his ERA to 1.86, second in the American League to Shane McClanahan’s 1.71 for Tampa Bay.

A 39-year-old right-hander who missed last season while recovering from Tommy John surgery, Verlander averaged 96.3 mph with his fastball, 1.4 mph above his season average coming in.

“I feel like I haven’t been able to let it go like that in a long time,” Verlander said.

He said he was throwing the ball recently on an off day and tried a different arm path. He saw positive results in his last start before the All-Star break.

’It was a solid one tick up,” he said. “I was able to do that again today and a lot more times, so I’m definitely happy and a bit surprised. Surprise is the wrong word — I was hopeful that this this could happen.”

Verlander retired 15 straight between Adam Frazier’s second-inning single and Carlos Santana’s ninth home run, which cut the lead to 2-1 in the seventh. Seattle loaded the bases on walks by Eugenio Suárez and pinch-hitter Kyle Lewis around Frazier’s single, and Verlander struck out No. 9 hitter Sam Haggerty on his 101st and final pitch, clocked at 97.4 mph.

Verlander has allowed one earned run or fewer in seven of his last eight starts.

“I remember the greats, Bob Gibson and (Tom) Seaver, and I told him, ‘You know, when they were in trouble, they knew how to pitch out of trouble,’” Houston manager Dusty Baker said. “The mark of a good pitcher is figuring out how to get either a double play or a popup or a strikeout, and I tell you, that one that was great. I mean, we needed that. He needed it. We’re operating on fumes today, so I’ll say that was a great victory.”

Kyle Tucker and Yuli Gurriel hit RBI doubles in the fourth to help the Astros to their fourth consecutive win and send Seattle to its second straight loss after a 14-game winning streak.

Houston is 27-9 since June 12 and ended the Mariners’ streak of eight consecutive winning series.

Logan Gilbert (10-4) gave up two runs and five hits in six innings with eight strikeouts and one walk. He struck out his first four batters, but gave up back-to-back doubles to Gurriel and Tucker with two outs in the fourth after his only walk, to Yordan Álvarez.

Bryan Abreu got three straight outs to finish the four-hitter for his second big league save, his first since May 26 last year.

“We haven’t lost a series in a while,” Seattle manager Scott Servais said. “We’ve played so well. We’ve been getting all those big hits in those big moments. It just hasn’t happened the last couple of nights.”

Astros: Closer Ryan Pressly could return to an overused bullpen Sunday from paternity leave. ... RHP Lance McCullers Jr. (right forearm strain) made a rehab start Friday for Double-A Corpus Christi, striking out three over two innings. He threw 40 pitches, allowing a run. McCullers has missed the entire season. “I heard he had good velocity,” Baker said. “I heard he threw the ball well, and I’ve heard he’s very happy with his performance, especially the first time out. I’m sure he was a little nervous. But I’m waiting to hear today from our trainers to see if he has the aftereffects.”

Mariners: Servais said All-Star rookie Julio Rodríguez remains day to day after missing a second day due to a left wrist strain. The center fielder was not available off the bench Saturday, and Servais said he would remain out of the lineup until there was no soreness. Servais wasn’t sure when Rodríguez injured the wrist. He jammed it against the Rangers last Sunday sliding into second, but told Servais he wasn’t hurt afterward and appeared to participate in the Home Run Derby without issue. “If anybody’s ever been involved in an event like that — not many of us have — but the adrenaline rush just has to be out of this world, you know, with everybody on their feet and you’re doing your thing and you’re 21 years old,” Servais said. “And I’m guessing he felt that the next day after or something like that.”

Astros: LHP Framber Valdez (8-4, 2.66 ERA) returns to the mound for the first time following his All-Star Game win. He struck out 10 over six scoreless innings during his last start, a 3-2 win over the Los Angeles Angels on July 14. 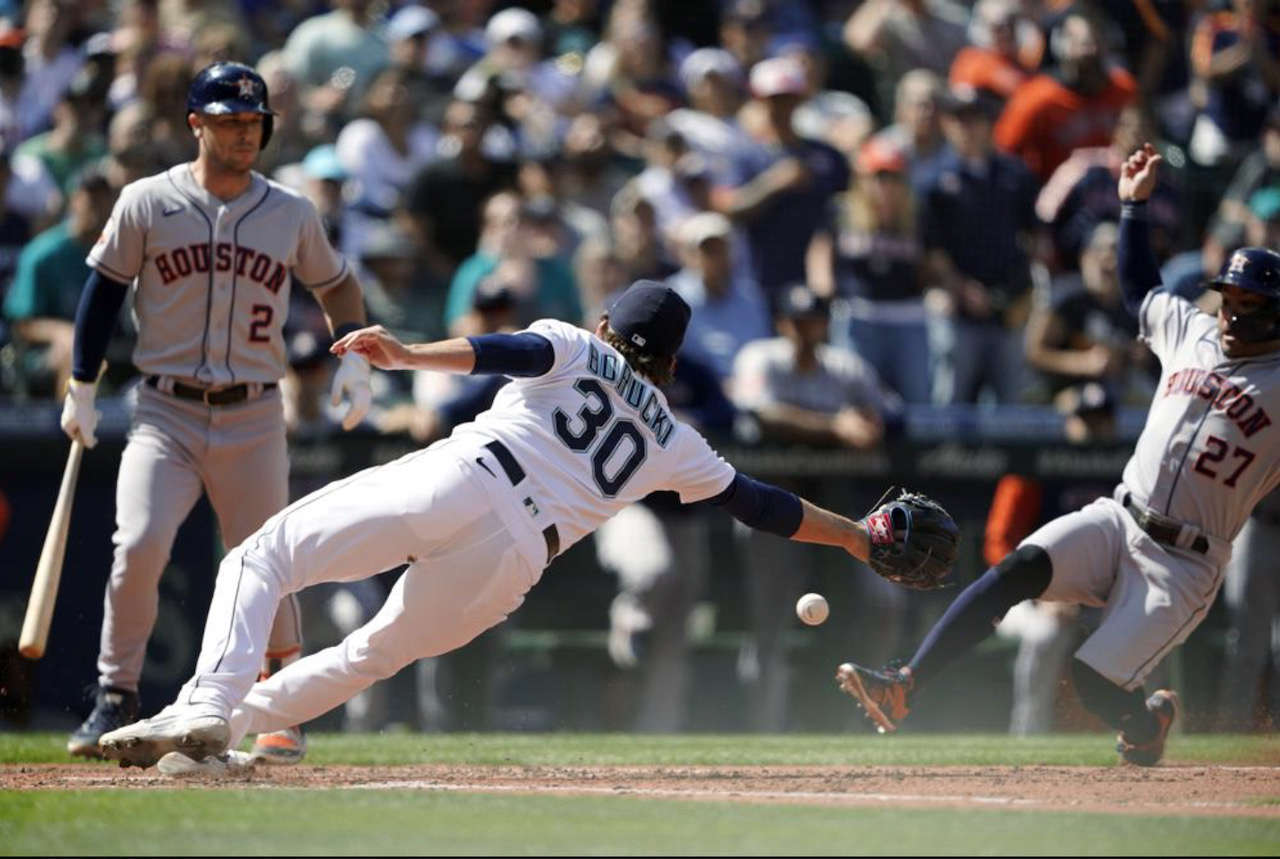 Above - Houston Astros' Jose Altuve, right, slides in to score on a wild pitch as Seattle Mariners pitcher Ryan Borucki (30) attempts to tag him out during the eighth inning of a baseball game Saturday, July 23, 2022, in Seattle. (AP Photo/Ted S. Warren)