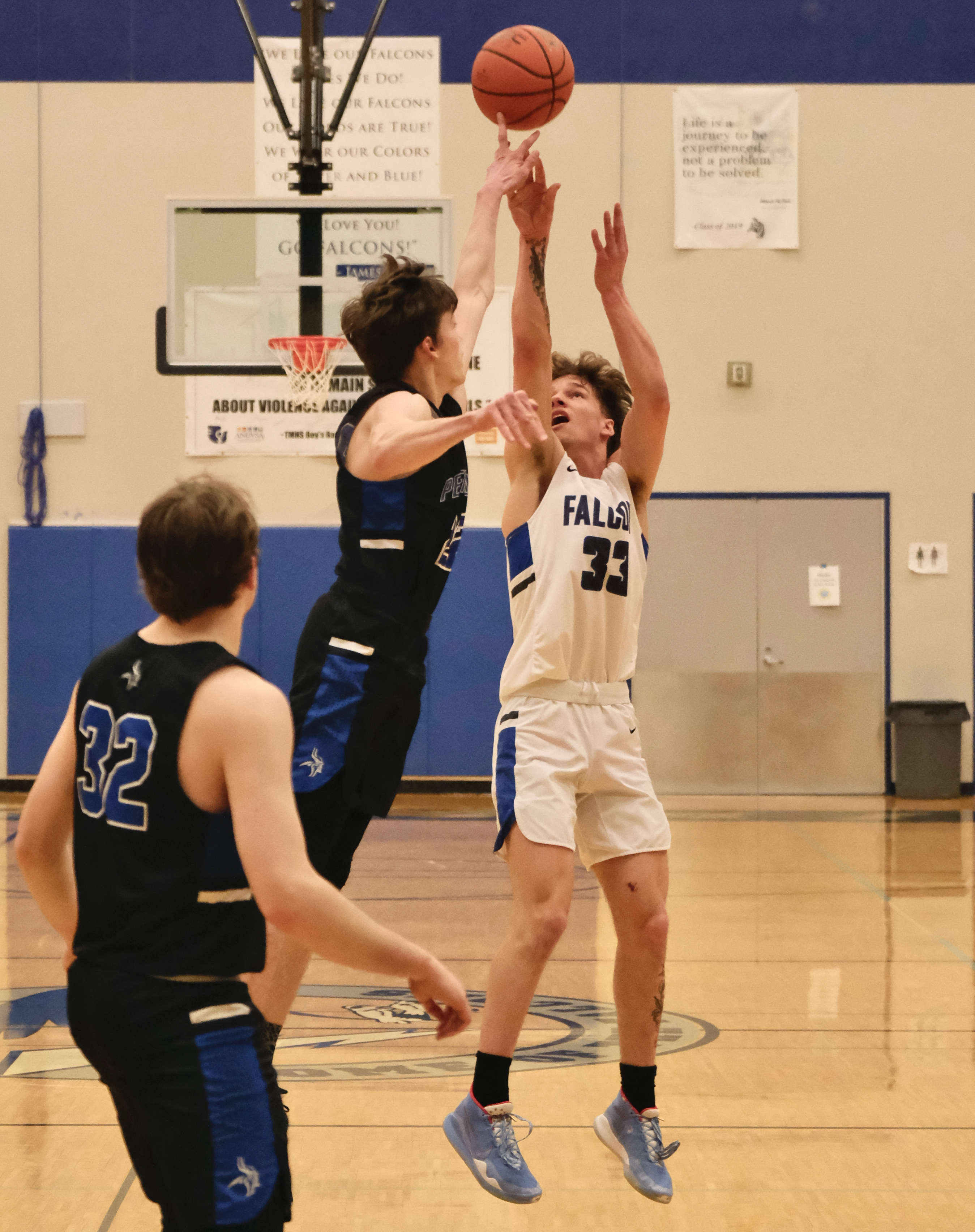 Petersburg senior Michael Durkin blocks a shot by Thunder Mountain sophomore Thomas Baxter (33) during the Vikings 66-52 win over the Falcons at the Thunderdome on Thursday. (Klas Stolpe)

Juneau, Alaska (KINY) - The Thunder Mountain High School Falcons, playing in their 4A home known as the Thunderdome, fell to the onslaught of a neighboring horde of Vikings from 2A Petersburg, 66-52, in a boys game Thursday.

Petersburg brought a roster of size to the game, and Thunder Mountain was surprised by a quick 12-0 run on a range of baskets by the Vikings six-foot-three Lathum Johnson and six-foot-three Jack Engell and strong control of the backboards by six-foot-four junior Kyle Biggers.

“They definitely had some real good size,” Thunder Mountain coach John Blasco said. “Their big kid was excellent inside in terms of rebounding, post position, finishing… they were big. You have to give them credit. They came with a purpose and an energy level that we didn’t match. They went inside, they cut hard, they attacked the basket, they rebounded the ball and they were up 12 to nothing to start the game.”

A steal by five-foot-nine TMHS senior Isaiah Nelson put the Falcons first two points on the board with 3:25 left in the first quarter.

Falcons six-foot-two sophomore Thomas Baxter answered a free throw by the Vikings six-foot sophomore Hunter Conn but Petersburg’s Biggers scored inside to give the Vikings a 15-4 lead that looked unshakeable.

“We are pretty athletic, too, and that kind of helps,” Petersburg coach Rick Brock said of the Vikings' size. “We were hoping to take advantage of that on the offensive end. And once we kind of found out that we could, the guys started to get more confidence in what we were trying to run and it worked out pretty good.”

Thunder Mountain responded by pressing full court and forced three straight turnovers with five-foot-nine sophomore Samuel Lockhart benefiting with a layup and Baxter laying a shot over the rim and then converting on another layup while being fouled to cut the lead to 15-11.

Falcons six-foot-four sophomore James Polasky followed a shot at the buzzer to cut the lead to two, 15-13, after eight minutes of action.

The Falcons' Baxter hit a shot past the arch to answer a nice short jumper by the Vikings six-foot-three senior Michael Durkin and after a Petersburg turnover Baxter buried another deep shot to give Thunder Mountain their first lead of the game at 19-17.

Baxter then stole the ball and dunked to ignite the crowd for a 21-17 advantage.

Petersburg would exchange baskets by Biggers and Durkin with hoops by Falcons junior MJ Tupou, Polasky and senior Matthew Hartsock as the quarter closed. The Vikings' Durkin hit a deep three at the buzzer to pull within one point of the Falcons, 27-26, at the half.

Petersburg’s five-foot-10 sophomore point guard Rik Cumps directed the Vikings offense to set up Durkin for nine points in the third quarter from all parts of the key. The Vikings added to that with strong play inside from Biggers, Engell and Johnson.

Thunder Mountain had three shots past the arc from Lockhart and Baxter but the Falcons would trail 47-40 with one quarter remaining.

“I felt in the second half we really played well together,” Brock said. “We passed the ball well and shared it and went to the places where we had an advantage, and obviously we shot the ball well. Defensively we kind of shifted things a bit and were able to take them out of their rhythm a bit for long enough to grab a lead. I think those two things made a good start for us in the second half.”

Petersburg outscored Thunder Mountain 19-12 over the final eight minutes as they pushed the ball inside the key.

“Why it didn’t seem like we had anything that seemed to be working or flowing, we kept competing,” Blasco said. “We kept battling. We tried to go with the two guys that have led us to this point and unfortunately shots weren’t falling the way we would like and we could never get any real momentum going in our direction.”

The Vikings had a two possession lead midway through the fourth quarter and the Falcons had to start gambling for the ball.

“I thought our guys had composure down the stretch,” Brock said. “We were able to pass the ball around, stretch them out defensively and got a couple good looks at the basket. It was really hard fought until those last minutes. We were able to score a couple times against their pressure and stretch the lead out to double figures. A hard fought 30 minutes up to that point.”

At the three minute mark, the Vikings' Engell, Durkin and Biggers would put a 10-3 run together down the stretch to close out the win. Lockhart accounted for the Falcons' lone deep shot in those final minutes.

“We are hard to guard because we have seven guys that can put the ball in the basket for us,” Brock said. “So you have to pick which one you are going to try and neutralize, inside or outside. I think tonight we did a good job of sharing the basketball. And Michael (Durkin) shot the ball really well in the second half which made it tougher because we have that inside presence.”

This was the Falcons first home game of the season while the Vikings have not played in Petersburg yet. After only getting six games all last season the Vikings have played in three travel tournaments across the state this year and have faced 4A South Anchorage, 5A Wilsonville (OR), 3A Sitka and 2A state power Unalakleet.

“They are definitely road tested,” Blasco said. “A great group of young guys that coach Brock has got. And he does such a great job of getting them to execute and perform at a high level and you saw that tonight out of his whole group.”

Blasco said he told the Falcons, “'Look, you just got beat on your home floor by a team that came with a mission to beat you. The good news is tomorrow is a new day. We may not see the sun but the light will be out. Wake up and you have got to shift gears and be ready to play conference games because JD will be motivated to beat you just like they were. You have to learn from these experiences. You can’t stew on them, you can’t hang your head. You have to learn from them, be motivated by them and be ready for the next day.'”

Petersburg travels to play Haines on Friday and Saturday.

“We’ve played some really good teams,” Petersburg’s Brock said. “We have had a chance to play against some really good quality teams and that has definitely helped us get to this place we are at now. We have a long ways to go. We are just getting into regional play. We only had six games last year so getting these guys some time on the court is so important. You can just see every weekend we play we are getting more comfortable on the court.” 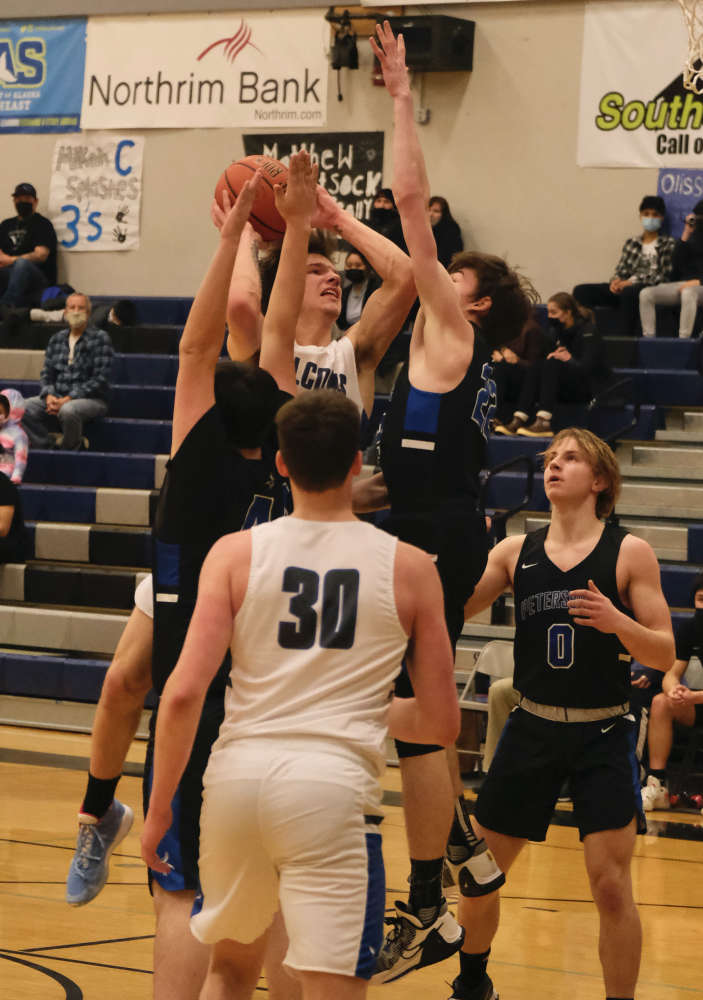