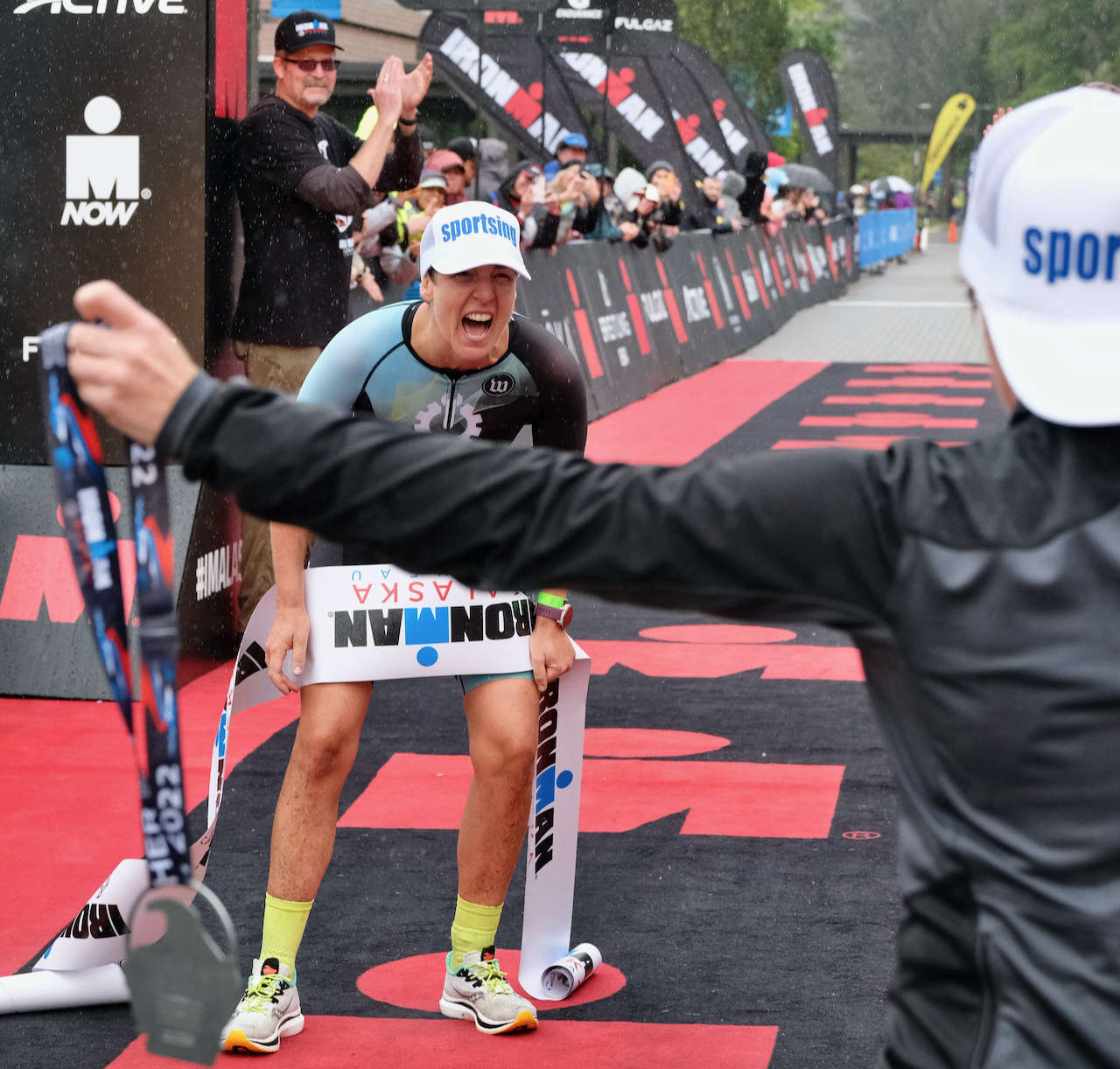 Juneau, Alaska (KINY) - The 49th state’s rugged reputation was put to the test and passed by roughly 1,000 athletes on Sunday as the inaugural IRONMAN Alaska triathlon started on the shores of Auke Lake, traveled an adventurous Glacier Highway, toured scenic backroads and trails and deposited the perseverant into the welcoming embraces of the local population.

“Overwhelming,” overall winner Alex Whetman of Riverton, Utah, said. “The support from Juneau was amazing. I felt like I was out with friends… I’m excited. When I saw this race I knew I wanted to do it because it would be a cooler marathon. I do well running in the cool. Heat is rough for everybody but some people excel running in the heat. I’m generally not one of them…”

Whetman finished the 1.2-mile swim, which was shortened from a full IRONMAN swim distance of 2.4 miles due to the water temperature Sunday morning, 112-mile bike ride and 26.2-mile run in nine hours 11 minutes and 17 seconds.

“Look, that is the third bald eagle I have ever seen,” Whetman said, pointing to the large avian in flight over the finish line while media awaited his response on the win. “We don’t have many of them in Salt Lake.”

Whetman, who slowed at the finish, broke the IRONMAN finish line tape and collapsed with leg cramps, said miles 20-40 on the bike portion were grueling.

“It would have been easy to stop,” Whetman said. “So easy. This was my fifth IRONMAN. I know things can be difficult… I couldn’t squeeze my bottles for nutrition… If anything would have gone wrong at all my race would have been done. It was everything to hang on and try to get warm. I was just miserable. It took everything mentally to get through it… the swim was cold but I have been in similar temperatures before… the ride just started with a chill…”

Whetman noted swimming is his weakness so the shortened swim course due to the water temperature, per IRONMAN safety guidelines, "played in my favor. The bike is my strength… two out and backs. On the first out, I rode super hard to try and catch the front. The second back I just sat at distance on the guy that was in first and then I put a dig in that last out and back. Got my 10 or 12 minute lead and then somehow extended it on the run. I am not a runner by any means. This makes me feel like a runner, this was my best marathon…”

But the ride was warmed as fans and traveling supporters gave athletes a boost along the course.

“I know I heard my name called over, oh, I don’t know, a thousand times,” Whetman said. “That meant a lot. And I ran the best marathon I have ever run before. This race meant a lot…”

Whetman, in a post race interview with “Voice Of IRONMAN” Mike Reilly, broke into tears saying, “My dad passed away from ALS in 2010, my aunt is sick with ALS right now, and my great friend Kyle Brown is dying as well… so, this is for them… it is unbelievable, I never thought I would win ever…”

“Absolutely incredible… inspiring,” Kendra Whetman, Alex’s wife and his triathlon trainer, said. “So many hours of commitment. For anything to go wrong, at any point in Alaska… he did see some bears on the course… the weather was incredible even with the rain, the support crew, the fans, the volunteers, all have really made this race so first class. Having someone that is so committed is really impressive because this is a full time job, it really takes two to make this successful… I try to workout a lot so I can carry his gear bags…”

Alex Whetman said, “I am lucky to have her.”

Local cyclist Will Coleman, competing for a Kona IRONMAN World Championship spot in the 35-39 age group, was the fastest Juneau and Alaska athlete to finish the course, crossing in a time of 10:03:24, besting Anchorage’s Todd Jackson (45-49) for 14th place overall.

“I am feeling very sore,” Coleman said Monday. “My right foot is battered and really sore. It is getting better but I believe I have a stress fracture. I never expected a top 15 finish.”

This was Coleman’s first full IRONMAN and only his second triathlon. In July he won the 2022 Sourdough Half-Triathlon in Chatanika, Alaska, with a time of 4:35:06.

A top cycling racer and member of Las Vegas, Nevada's Flo Factory Team, and a former University of Fairbanks skier, Coleman only learned to swim in November.

“This is kind of unexpected,” he said. “This whole thing started when Jamie Bursell peer-pressured me at the last stage of 2021 Tour of Juneau and I decided, ‘Well, alright, I’ll do it.’ I started running again. I kept cycling and kept having success in all the races here and then I taught myself to swim. I just got better at swimming, my run kept improving but I definitely wasn’t expecting top 15 though. That was surprising.”

Coleman noted that swimming was his weakest link so the shortened distance prior to the start was an advantage.

“Once I was on my bike I was really comfortable,” he said. “I mean, I almost live on my bike. It was wet and cold but I know our roads and the weather… I surprised myself in the run. I was able to stay with it but I was hurting… it seemed like a long day for sure…”

“And all the race volunteers,” he said. “I tried to say thank you at every station but I know I missed one. I was really starting to feel the effects of the race so I was a little in panic mode and probably not as polite as I was in all the others. The people out in the stations were incredible… and all the support along the course. It was ridiculously awesome. I was stoked. To see everybody out in their driveways just so excited. They weren’t, like, mad we were invading their space or something, they were getting into it and making tons of noise and it was great.”

“Unfortunately at that time I will be in the process of moving to South Carolina,” he said. “Plus I don’t think my foot will be healed by then. I definitely want to do Kona at some time. I think I have found my endurance niche in triathlon.”

“It was pretty awesome,” Jackson said. “I mean, Juneau really stepped up today. All the people out there were super encouraging… just giving you high-fives all around the course… the kids were super into it. It was really cool. Juneau was really nice. The people throughout this entire experience stepped up throughout… like volunteering cars. Actually, two of my friends that live down here, one of them let me use her car, one let me send my bike to her, I mean, just awesome people.”

Jackson said the chip-seal section on the bike was the toughest part.

“Just because it is a grind,” he said. “But that’s alright. It’s a good test. You know, you are out there in the middle of nowhere. I would totally come down and do this race again. The course is definitely a good test but Alaskans have an advantage I think. I mean, we’re used to this kind of weather so I don’t think it psychs us out too much. I will definitely tell all my triathlete friends to give this a go.”

John Bursell was the second Juneau athlete to finish, qualifying for his eighth Kona IRONMAN World Championships, with a time of 10:13:20 as a 55-59 age group winner.

“The support was crazy,” Bursell said of the Juneau community. “It is amazing how many people were out there. To have so many people who I know and know me… to hear the support from the sidelines just really was great. I’m so proud of Juneau for coming out and supporting the race and athletes. People were giving people bikes to use, their cars, whatever they needed, and I keep hearing that. The athletes are just shocked. This is the nicest anybody has ever been at an IRONMAN so kudos to Juneau.”

“The course is awesome,” he said. “This is my favorite IRONMAN course… the course is amazing. Everything is great. The swim is great. Auke Lake is just a great swim, the water is clean and it’s just beautiful. We train here all the time… the water was cold at first and then after a while, kind of towards the middle, it was warmer and that’s the way it has been the last few days. It wasn’t that bad.”

The fastest female finisher was Liz Cullen of Gibson, British Columbia, Canada, with a time of 10:23:03 for 25th overall.

“It is absolutely incredible,” Cullen said. “I have never won an IRONMAN before. I think this one really suited my strengths and I am really glad I came out for it.”

This was Cullen’s fourth full IRONMAN.

“I took a bit of a hiatus to have kids and the whole thing,” she said. “I think maybe I would come back for another here.”

Cullen noted the hardest thing about an IRONMAN was "just knowing that you are going to be out there alone for a long time. It is good to really have your own reasons for being here and to take your mantras with you so that when the things get tough you’ve got something to keep you powering.”

Cullen said she was astounded by the Juneau support.

“Absolutely incredible,” she said. “There was people screaming my name all over the place and it felt like I was racing at home. This is a great town, really fun. It is absolutely stunning here.”

Click on the link below for Alaskan athletes (fastest times in each city underlined, overall finish noted if in top 100). - editor note: Sam Bibb contributed to this story. 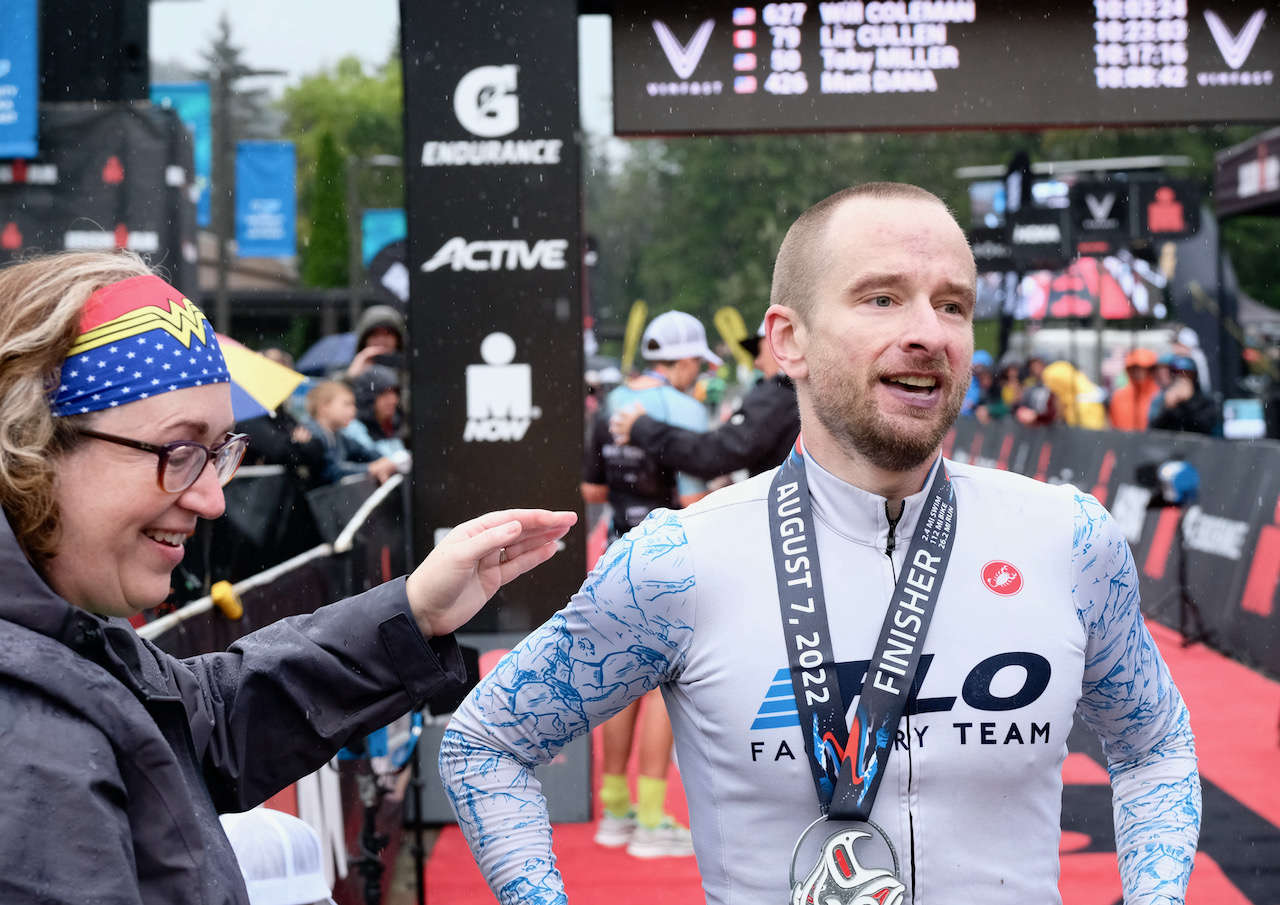 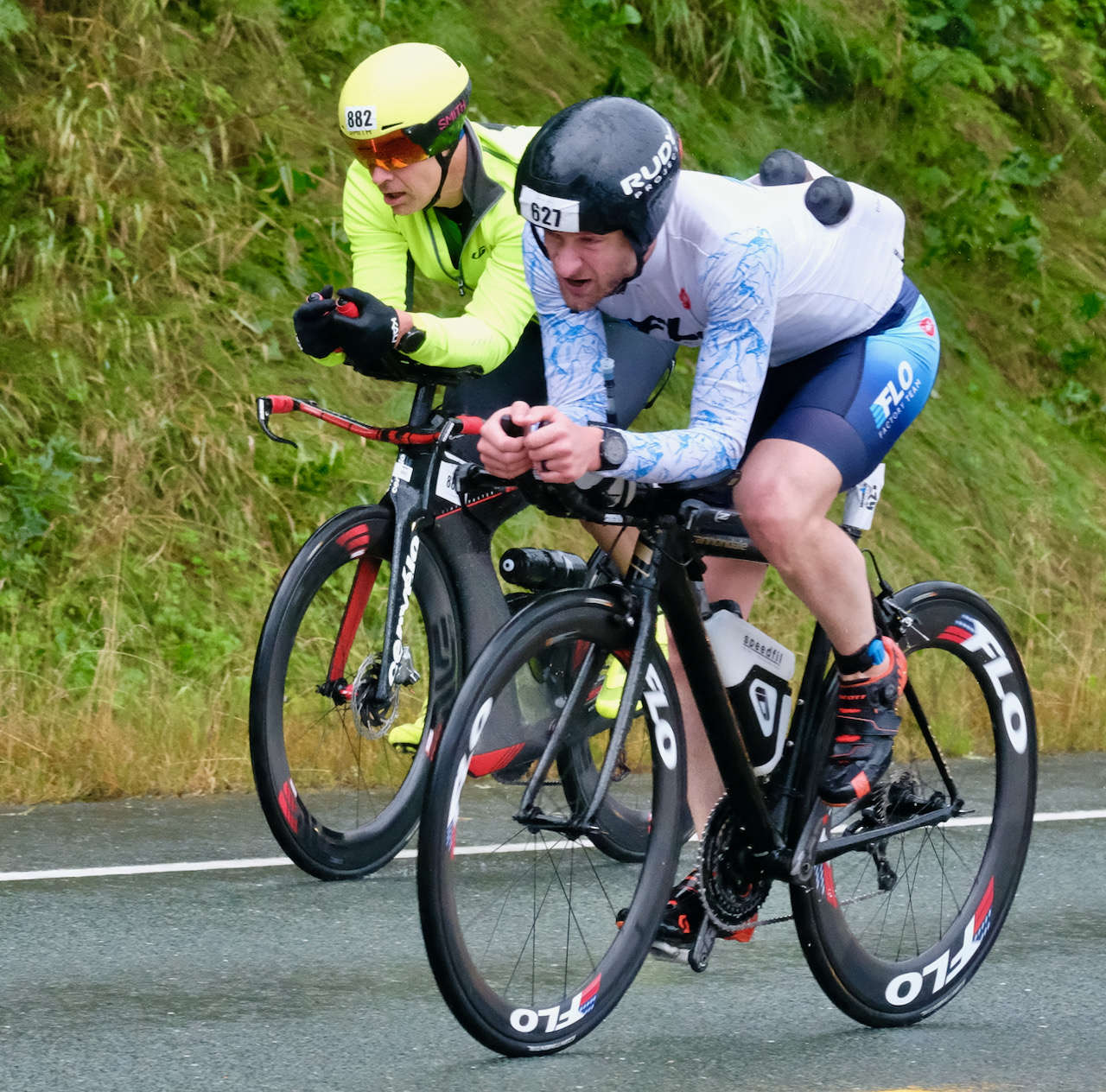 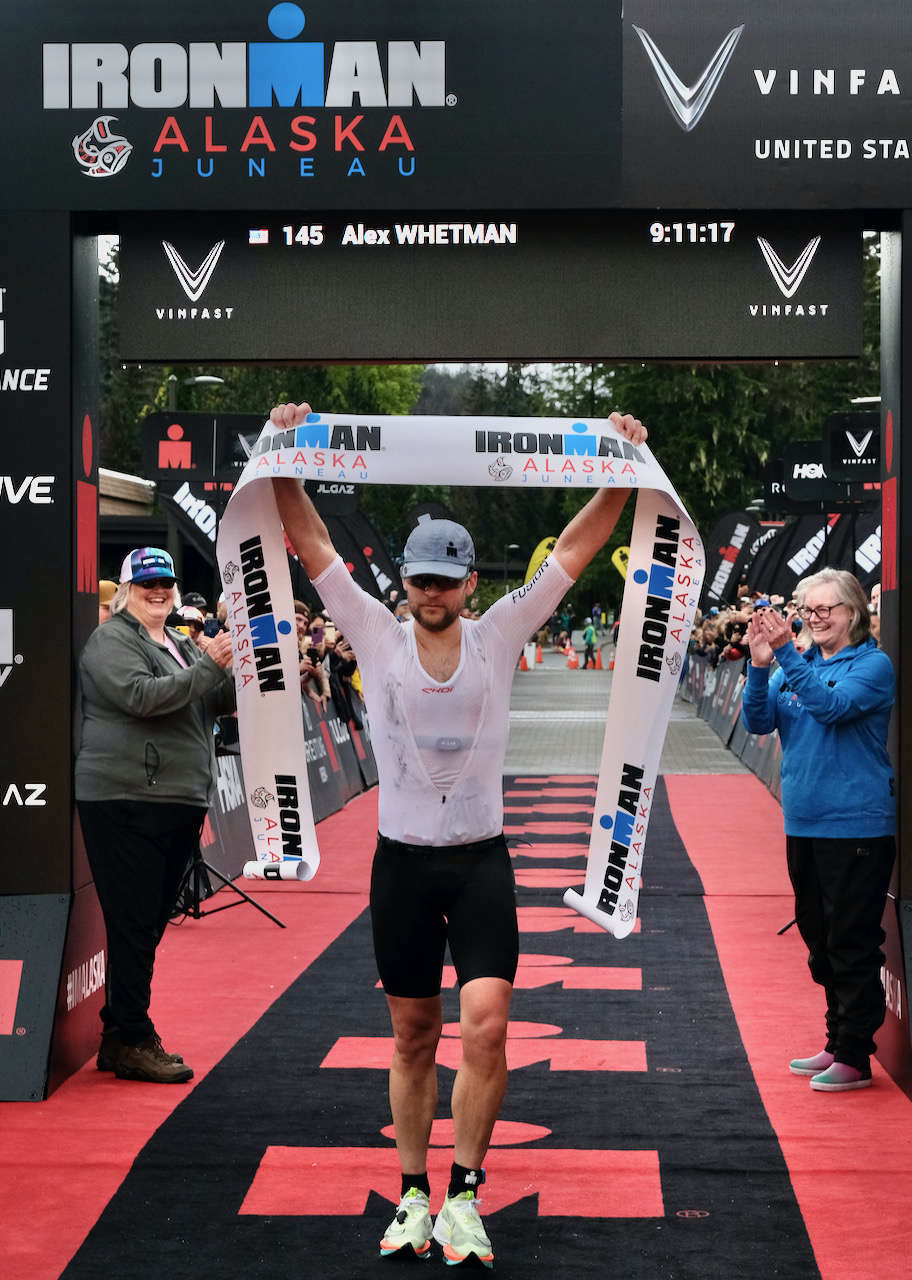 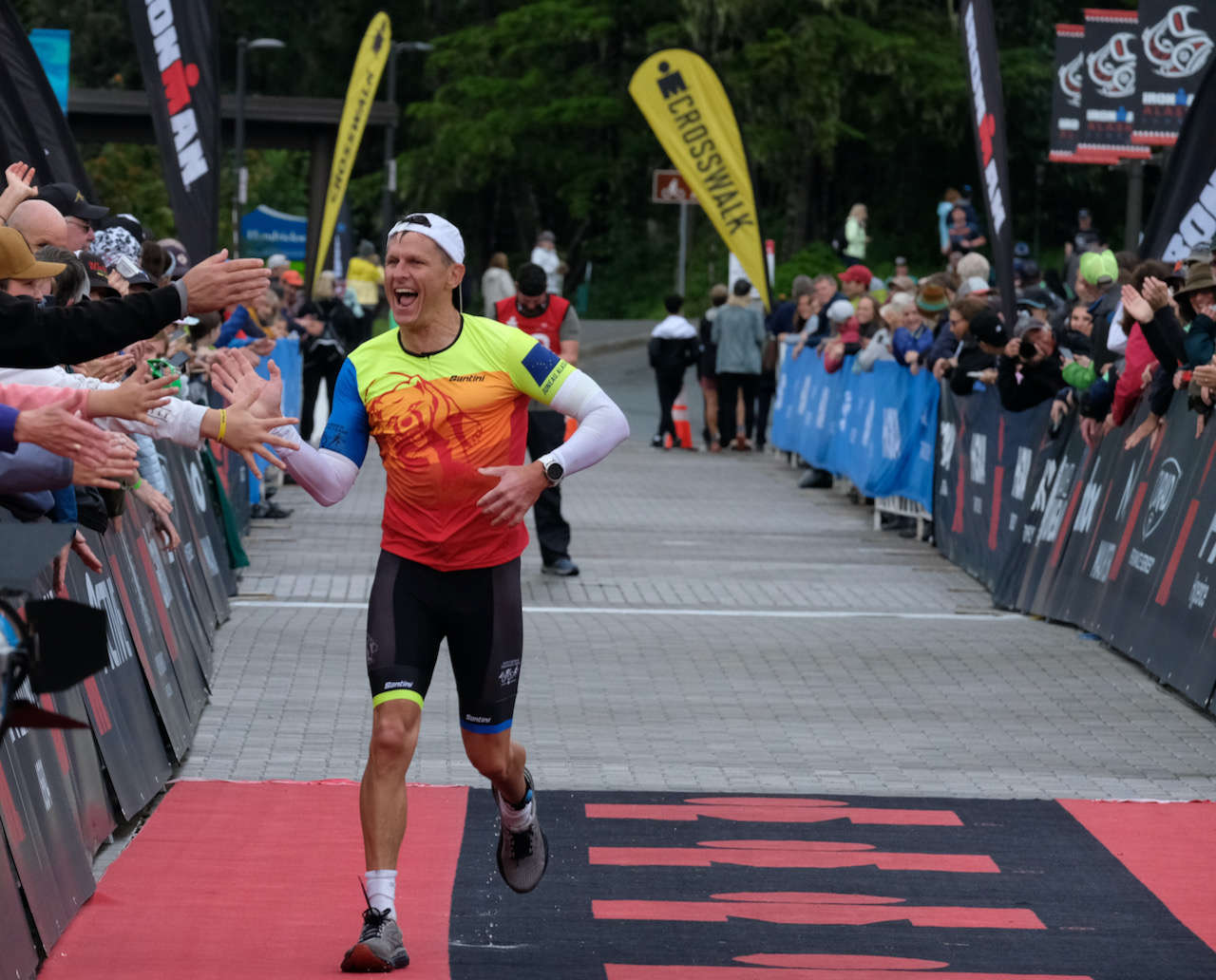 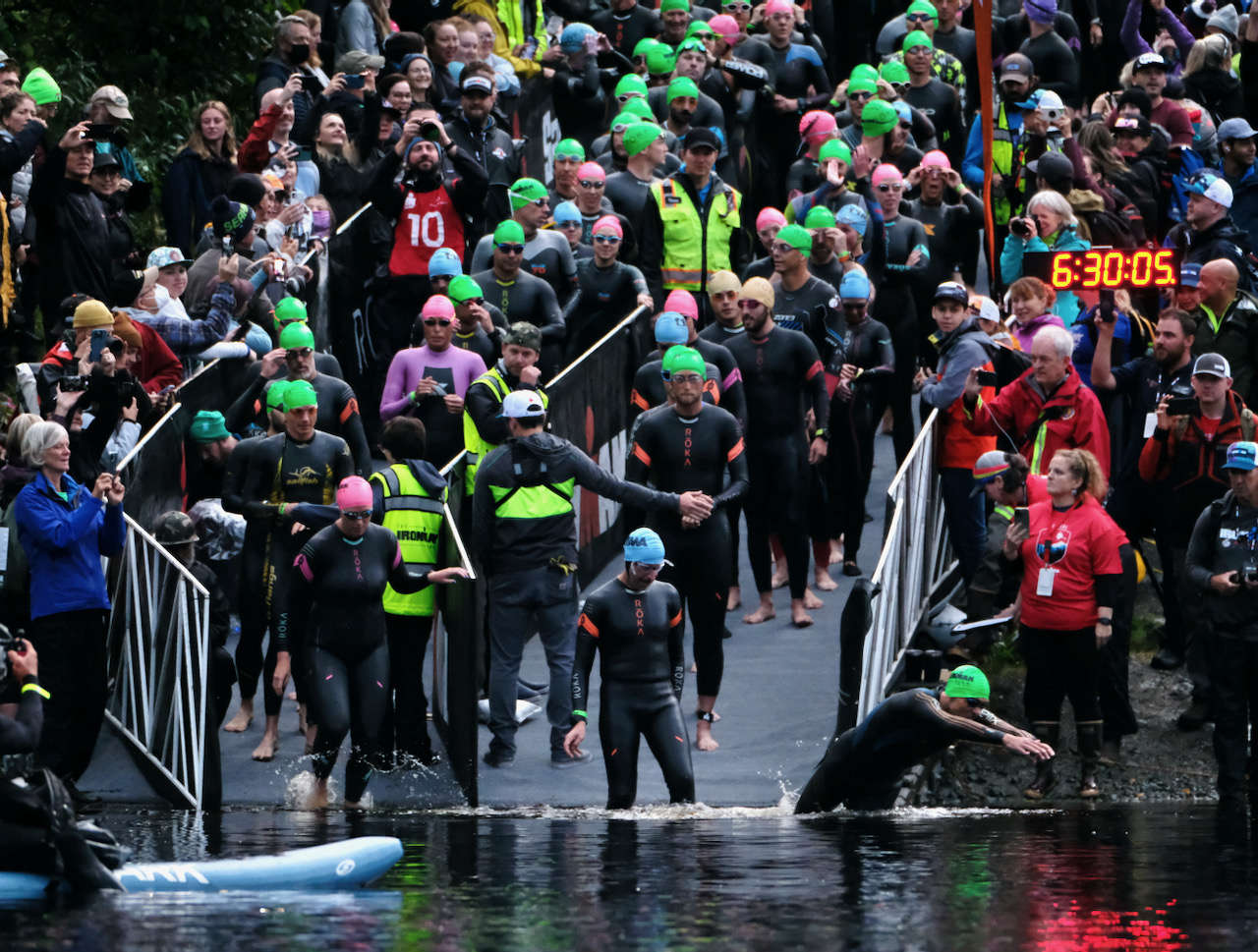 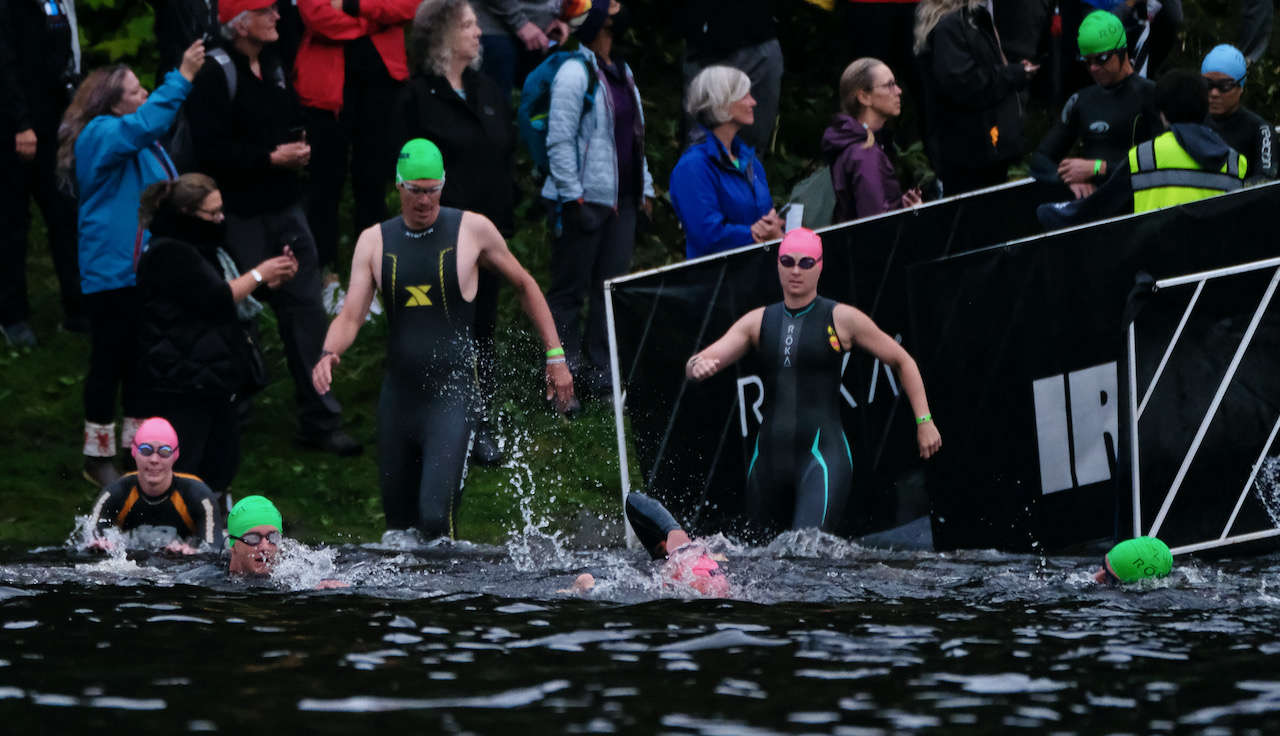 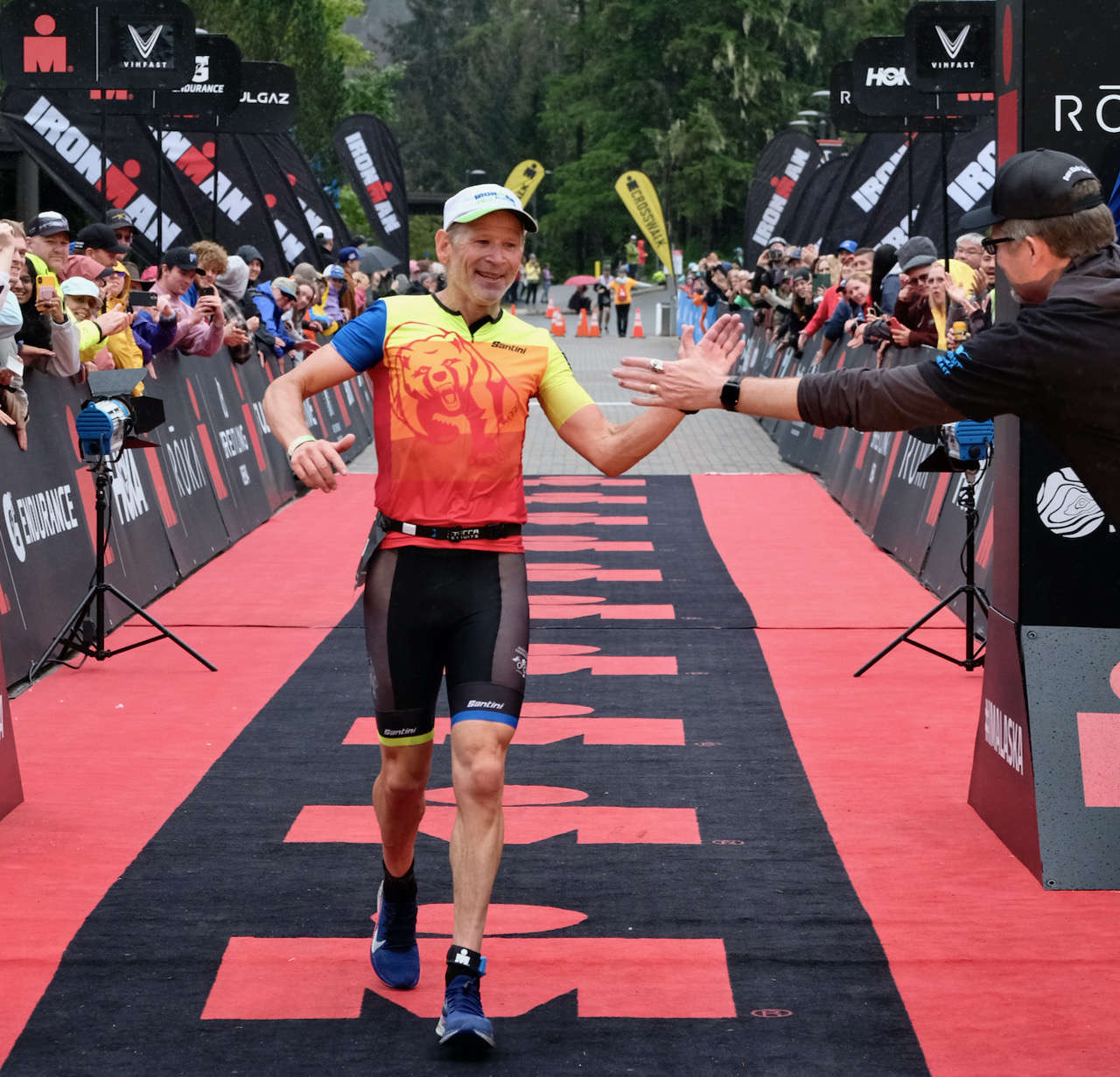 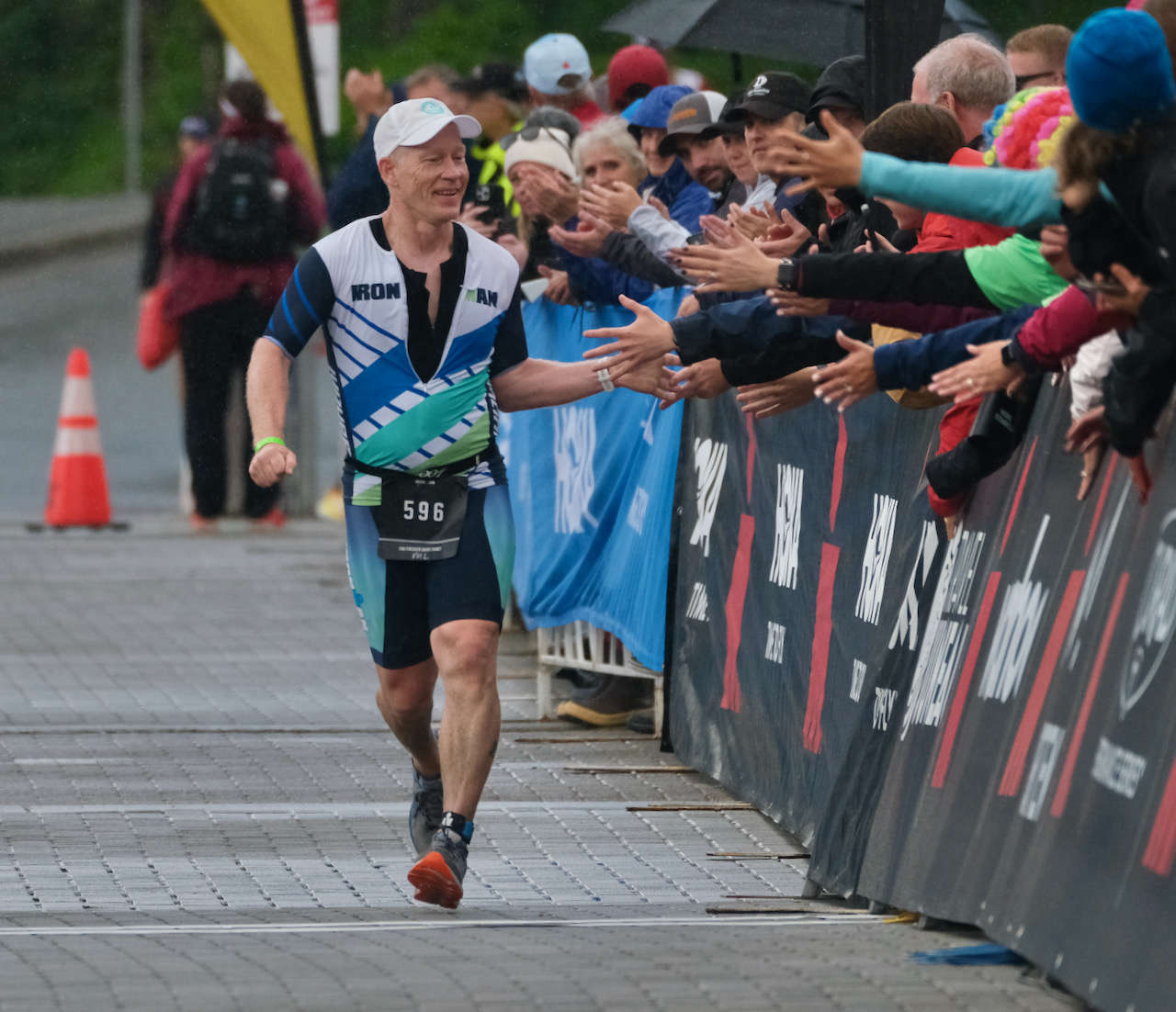 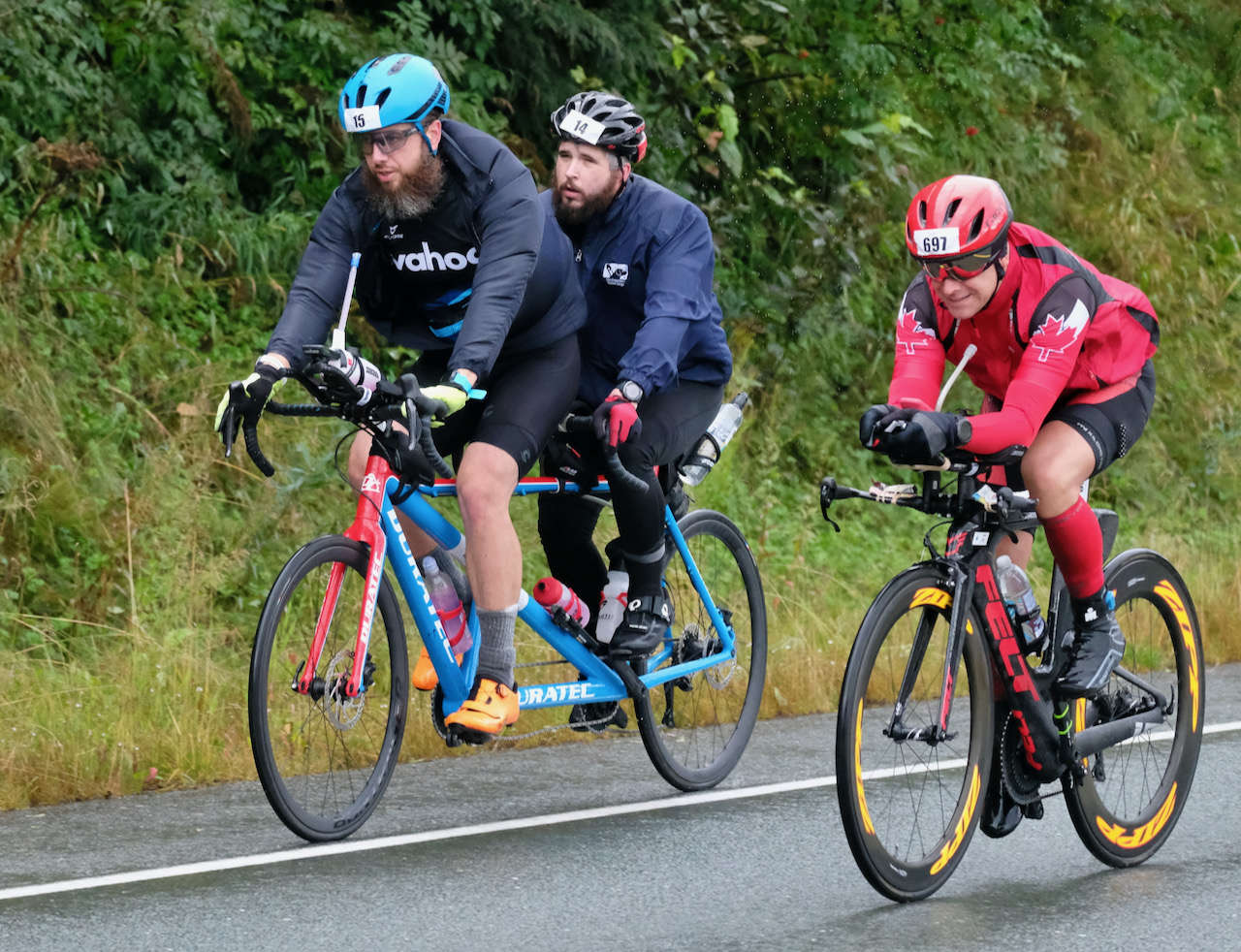 Above - Sighted athlete Andrew Emrick and visually impaired athlete Austin Marshall, bibs 15 and 14, are passed by Chris Romanowski of the Saint Louis Triathlon Club during Sunday's IRONMAN Alaska in Juneau. Below - Swimmers round the half-way point.

A slideshow of photos will be posted soon.