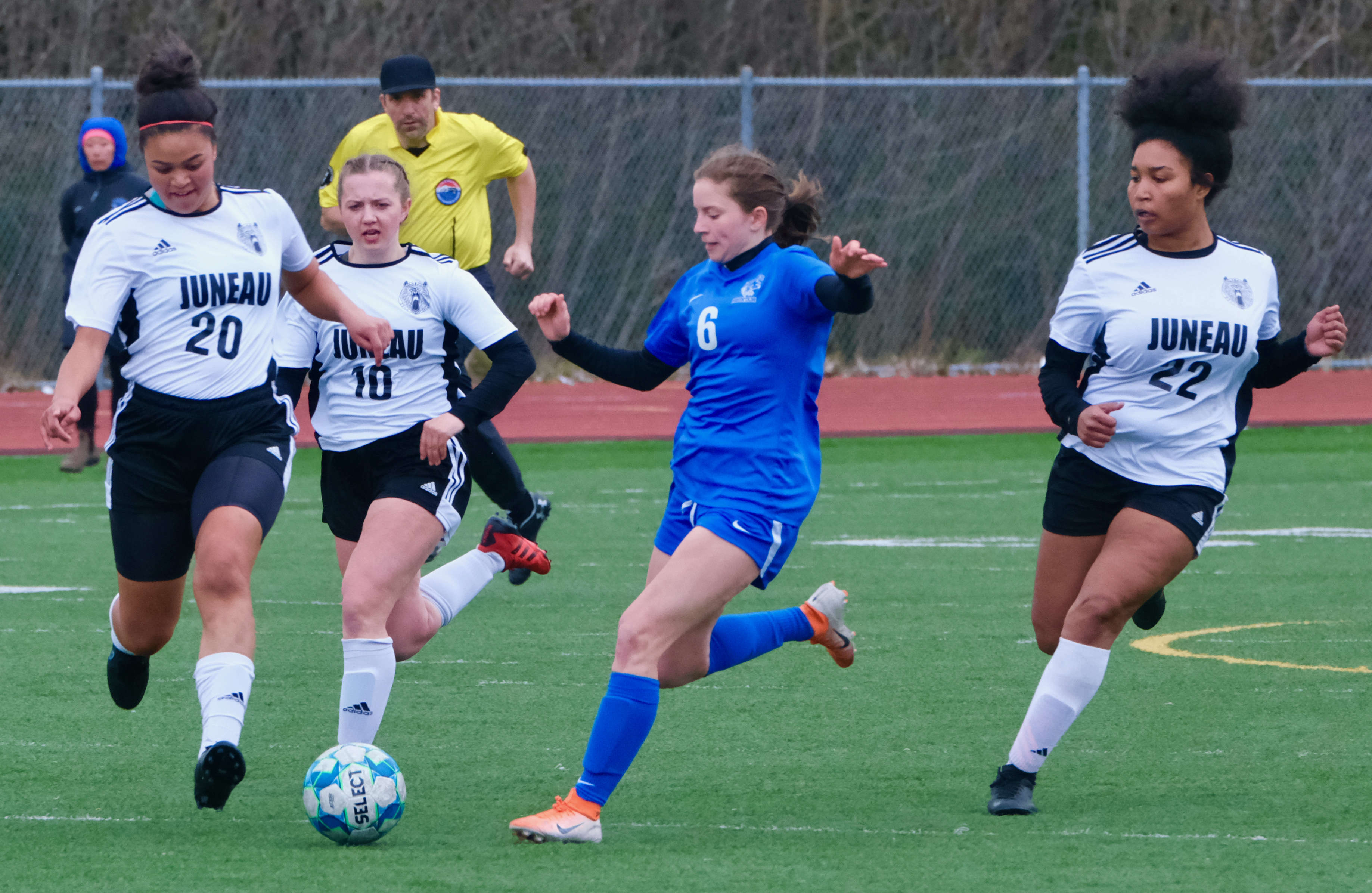 Juneau, Alaska (KINY) - Whoever had the wind at their backs had the advantage during Tuesday night's cross-town derby between the host Thunder Mountain High School Falcons girls soccer team and the visiting Juneau-Douglas High School: Yadaa.at Kalé Crimson Bears at Falcons Stadium.

And the wind blew harder for JDHS in the evening as they overcame a TMHS 1-0 home pitch lead in the first half with three goals in the second half for the win.

“Certainly wind played a factor for everybody tonight,” JDHS coach Matt Dusenberry said. “It was coming for sure and affected the ball on both sides. Kudos to Thunder Mountain. They absolutely came to play tonight. It seemed like every time we had the ball there were three of them on us right away. So I think that was kind of the key for us was to up our game up to their intensity and then things happened for us after we kind of sorted that out for sure.”

The ball had an extra dip in every touch with the added wind velocity and the first half TMHS was favored with the direction.

The Falcons used more of a one-two touch give-and-go style of play while the Crimson Bears were hitting longer balls.

“We have been talking about playing more compact soccer and the girls did it and it stifled the play for the other team,” TMHS coach Cindy Eriksen said. “Plus the wind was a factor I am sure in the long balls but in our eyes it felt like a victory because we played really great soccer and the energy was great. I am just really pleased.”

JDHS was pushed to step up to the TMHS play.

“That’s exactly what we want to see in a cross-town rival game,” Eriksen said. “We weren’t really sure what to expect going into it… just because coming off this trip over the weekend we had some injuries and there are some concussions… all these different factors that are going into the team chemistry but the girls have really great energy and they showed up today and it was awesome.”

Each side’s keeper, TMHS junior Valery Blackwell and JDHS senior Zuri DeJean, were tested early and both stopped shots in the opening minute.

TMHS senior Maryellen Bryson lofted a shot on goal that drifted into the net for a 1-0 Falcons lead 10 minutes into the action.

TMHS had solid defensive help in the back from seniors Naomi Olver and Ruchi Haight, juniors Mercedes Cordero and Kaelin Tibbles, and sophomore Adella Dihle as the Falcons swarmed JDHS forwards.

“It’s really improving,” TMHS senior Kiah Dihle said. “I was really excited. We were beating them in the first half. We kept our momentum up. They got some corner kicks but other than that we held really strong…”

TMHS senior Molly Brocious said the Falcons defense “was really good today. We’ve been working on clustering around them, so if one broke free we would try to have a whole defensive line on them and I think that strategy worked pretty well.”

Blackwell would suffer an undisclosed injury just before the half and Falcons sophomore keeper Zoey Moore came in and subsequently faced a shot by Goldstein and Bentz and a free kick by B. Plummer.

In first half stoppage time JDHS’ Bentz ran a shot into the box that brought attention from the entire back Falcons line as time expired.

Two minutes into the second half JDHS’ Goldstein hit a corner kick into the TMHS box and the Crimson Bears Bentz chested the shot in the Falcons net to tie the score at 1-1.

TMHS’ Bryson had a shot tipped wide and the Falcons earned a corner which was defensively played by JDHS and turned into a shot by the Crimson Bears that missed across the goal mouth.

JDHS senior Brooke Sanford and TMHS’ Brocious each had a run on opposing goals that keepers stopped.

JDHS’ Goldstein put a corner in the box that Sanford touched to Bentz who scored for a 2-1 advantage with 13 minutes left in the game.

“You know it was just Ella’s (Goldstein) corner kick,” Bentz said. “Sometimes they work and when they do it is really awesome. You know she always knows where to put the ball… today just worked out. When it went in I was just in shock… the second one was really nice too. I was really excited to really get the momentum forward… and then Brooke (Sanford) came in and scored the last of three awesome goals of the awesome team. And I love playing against the Falcons every time, they are an awesome team.”

Sanford’s clinching goal came in the 75th minute as she played a ball from senior Marina Lloyd and lifted a shot in for the 3-1 final tally.

“I knew I was in the box,” Sanford said. “I was like ‘okay I know I can shoot it from here so might as well just take it’ and I just went for it…”

Sanford said the wind adds another layer of difficulty to the match.

“She found out she was starting right before the game,” Dusenberry said. “So to find that out and not let it bother her or get too excited or nervous or anything else, I thought that she had a great game. And she is just a great kid, so why not?”

Prince played a solid game as a defender. She said she brings “aggressiveness, hustle, and a lot of uplifting support” to the team.

“Oh my God bro, it is so nice,” Prince said of the honor. “I didn’t think I was going to get the Hard Hat just because I started but it is very exciting and I’m really happy to see what I can do in the next game.”

Although the players had been buffeted by a numbing breeze for 80 minutes of play, a warmth was brought to the chill of the night as Falcons junior Mercedes Cordero was approached by classmate Preston Lam from the Falcons boys side who was holding a sign.

“I think people are going to remember it,” Cordero said emotionally. “At least my team. It is definitely a nice surprise. I think we played a good game and this is like a cherry on top… his name’s Preston, he’s on the boys soccer team, we wear the same number… I said yes!” 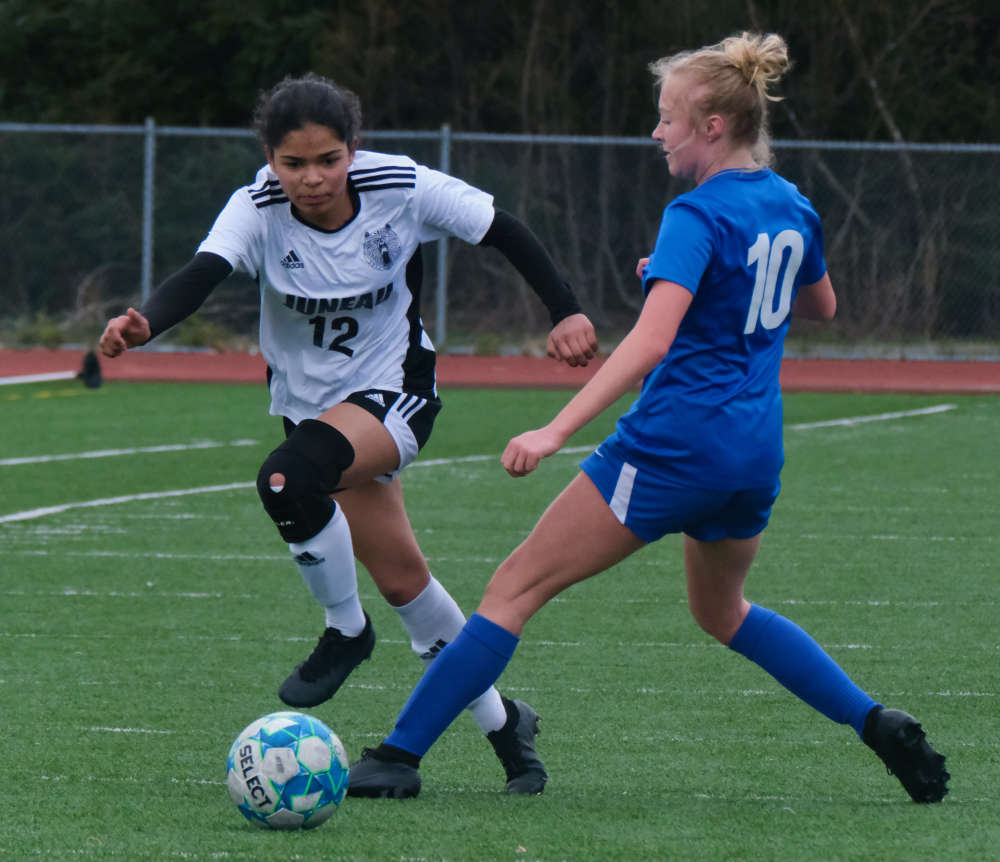