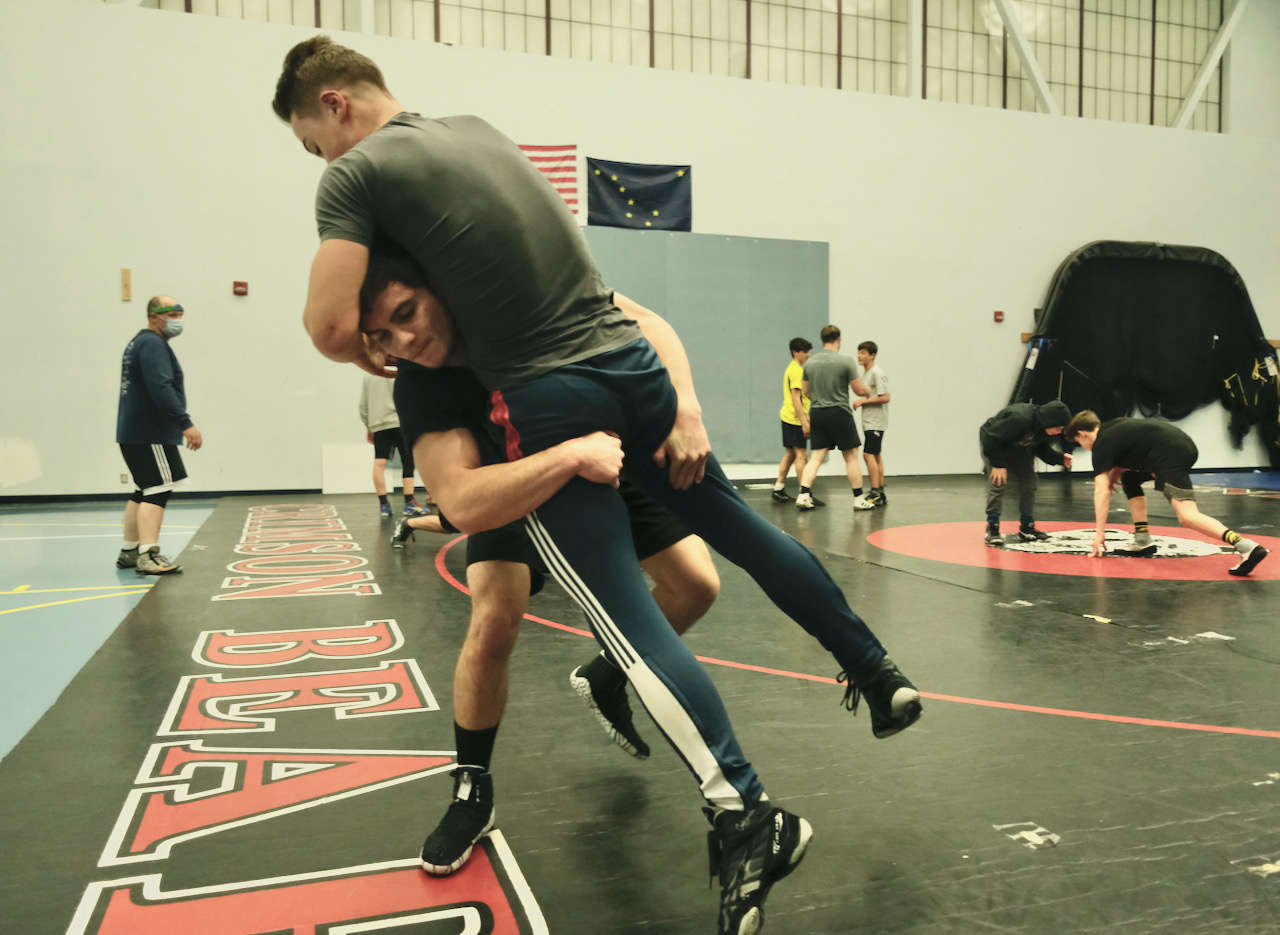 Juneau, Alaska (KINY) - The Thunder Mountain High School mat room is full. That is always a good sign. That means the program is robust or in the process of being stout and on the verge of bringing the capital city a Region V wrestling championship, possibly a state title.

Having the mat room full is a good thing, coach Adam Messmer said as roughly 25 grapplers went through drills inside the school’s auxiliary gym. “Not just for the sport overall but to give us a competitive chance at beating Ketchikan.”

Ketchikan has won 12 region team championships in a row as they have been able to put multiple wrestlers in each weight bracket.

“Right now we are going over our basics and doing ‘chain wrestling,’ where you are flowing from one move to the next move and not giving your opponent any time to react,” Messmer said. “We’re there. There’s no goofing off in the room. Everyone is here to work. It’s just been a great group of kids.”

The team is a mix of Thunder Mountain and Juneau-Douglas Yadaa.at Kalé athletes but they wrestle under the umbrella of TMHS.

Last season was pushed to spring due to the coronavirus pandemic and the state tournament was held May 21-22.

“We’ve only had a few months break, really, since our last tournaments,” Messmer said. “That’s kind of a good thing. These kids are still ready to wrestle.”

Last season the team had to wear masks to wrestle. This year they are being allowed to wrestle without the face coverings but they will have to test every week regardless of travel status.

Preseason practices started in August and most wrestlers in the mat room have been showing up since then. Running and weight training filled the preseason routine.

“Trying to get them into wrestling shape,” Messmer said. “It’s a tough sport. There are very few other sports where you have to be in the same physical shape as these wrestlers.”

The first match is this weekend at Petersburg.

“I feel like we are pretty ready for Petersburg,” Messmer said. “I think we are going to have a lot of bright spots. We are all excited.”

Fifty wrestlers had signed up for the season. A few left after the first practices. Roughly 25, mostly freshmen and sophomores, have been showing up for every practice to date. Some of the signees are still playing football.

“After they win state this weekend we will get about a dozen of them,” Messmer said, a nod to the Juneau Huskies football set to play in the state title game on Friday. “Mostly our upper classmen. I think they are going to be surprised how in shape these freshmen and sophomores are. They have been pouring their heart into it. But it will be nice to have those experienced guys back in the room in a few weeks.”

State placer Blaze Darbonne is one of the experienced wrestlers in the room now.

Darbonne bumped up to 152-pounds at the state championships last season and placed fourth.

“The fact that we don’t have to wear masks is a big part,” Darbonne said. “They would get in your face and obstruct your vision and it was really hard to breathe. Now it’s a big difference. It lifts your spirits to see all kids in here engaging in the sport. It’s just a really good thing to see.”

Darbonne said he is looking forward to the tournaments. He will start at 145-pounds this year but wants to go down to 140 midway through the season.

“Last year we only got to go to two because all the others were cancelled from COVID,” he said. “It was just regions and state. It didn’t really help us prepare for anything. But now that we have more tournaments, just the mat time and being in that pressure immensely prepares you for the next one. Just the experience of a live match helps you learn what works. My goal is to at least place in all the tournaments and be on the leader board for state.”

Freshman Colton Cummins joins his junior brother this year and has been another bright addition to the program as has freshman Justus Darbonne who wrestles his brothers Chase and Blaze.

“We’ve had some wrestle offs among them that have been pretty good because they are all around the same weight,” coach Messmer said.

Freshman Evelyn Richards has been wrestling six years. She is one of three females on the team and will compete at 145.

“So far the season has been fun,” Richards said. “There are a lot of freshmen, which is really good. The team is going to be big this year. I’ve gotten pretty used to wrestling with guys, they’re all really nice and respectful and I’m friends with most of them. I’m looking forward to traveling and getting closer to everyone and hopefully winning.”

There is now a state tournament for girls held at the same time and venue as the boys. Last season Wrangell’s Liana Carney won the Girls 135 state championship over grapplers from South Anchorage, Colony, Palmer, Bethel and East Anchorage. Her Wolves teammate Mia Wiederspohn was sixth at 160 and Petersburg’s DD Toyomura was sixth at 103. The previous season Carney won state at 103 pounds and Ketchkan’s Hayley Gilson at 130.

Ketchikan did not attend last season’s state tourney due to pandemic mitigations, neither did Mt. Edgecumbe who are, arguably one of the top girls programs in the state.

In 2017 MEHS’ Sydnee Kimber became a four-time state champion and was voted outstanding wrestler of the state meet for the second time. Her father Mike Kimber is noted as the reason girls wrestling has taken hold in Alaska and helped to establish the first girls state in 2014.

Now the TMHS wrestling team can add to that grasp.

“There are not too many 145’s across Southeast that I know of,” Richards said. “But up north there’s a couple pretty good wrestlers who I’m excited to wrestle. I’d say I am really good at throws and I’m good at wrestling when I’m on top.”

Freshman Denali Schijvens has been impressive in his practice outings with the senior Darbonne.

“He’s a first year wrestler, but he’s definitely into it,” Messmer said. “I think he wrestled one year in middle school, but they didn’t have middle school wrestling last year. A lot of these kids got a taste of it in seventh grade and then didn’t get to wrestle their eighth grade year.”

Many of the freshmen in the mat room have a history in club wrestling with the Juneau Tornados. There was no club season last year.

“Hats off to the coaches of the Tornados, this is kind of what they have been working for for years,” Messmer said. “Getting the kids to this point and getting our numbers back up.”

Two years ago the middle school programs, coached by Loren Cummins at Dzantik’i Heeni and Ken Brown at Floyd Dryden, both had 40-50 wrestlers apiece.

Messmer, who has been coaching for 15 years from peewee through high school, said the numbers are a positive sign.

Above - Wrestlers warm up during practice at Thunder Mountain High School.