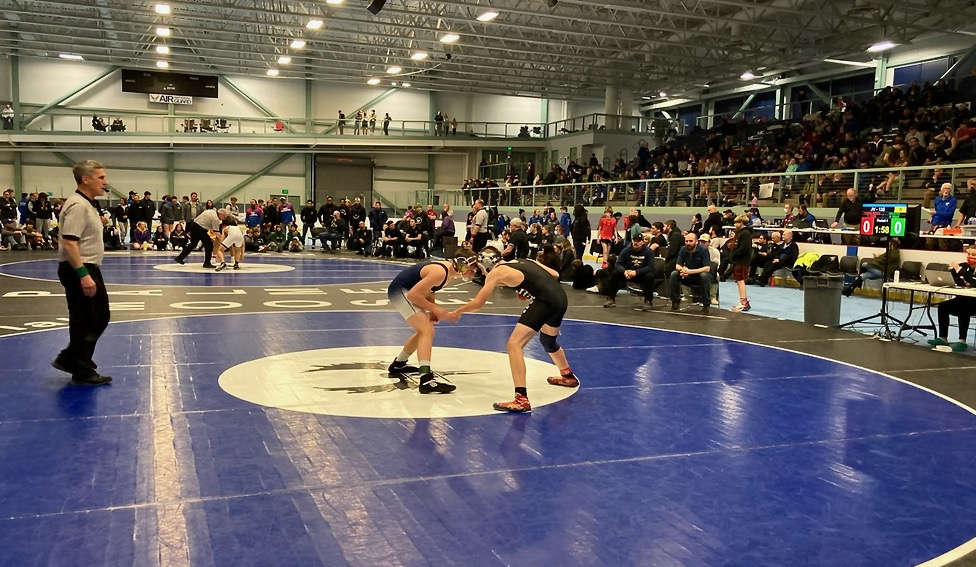 Juneau, Alaska (KINY) - The Thunder Mountain Falcons wrestling team, a mix of both TMHS and Juneau-Douglas Yadaa.at Kalé athletes grappling under the Falcons sports umbrella, faced their most intense challenge of the season against 30 schools in the Lancer Smith Fall Invitational at Wasilla’s Menard Sports Arena over the weekend.

“I say we got a solid B-plus,” Falcons coach Adam Messmer said. “From what I saw in Ketchikan last week and what I’ve seen this week we are going forward in leaps and bounds.”

The Falcons placed 13th out of the 30 varsity schools at the venue.

“We have a really young team,” Messmer said. “For a lot of these guys it was their first look look at a big tournament like this. There were eight mats going all the time and we were there late into the night every night. For somebody that hasn’t seen it… it’s quite the spectacle.”

Colony won the team title with 255.5 points, Ketchikan was the top southeast school in ninth place with 75 points and the Falcons scored 41.

The Falcons top two grapplers continued to display their abilities on the state scale with junior Carson Cummins taking third in the varsity tournament and classmate Sage Richards fifth.

“Carson has been picking up his game every match,” Messmer said. “He tightening up his skills as he goes.”

Cummins is 12-1 on the season. There are still matches from the Petersburg and Haines tournaments that have not been officially added to the state seeding system yet.

“His record is actually better than that,” Messmer said. “But as far as state seeding we are going with this for now.”

Cummins opened the tourney with a pin on Seward’s Hunter Kurtz, decisioned East’s Raif Jones 12-6 before losing by a point in the semifinal to Colony’s Asher Clayton (21-3) by a 10-9 score.

“It was about as close a match as you are ever going to get,” Messmer said. “Instead of getting down in the dumps he picked himself up and his next few matches he just tightened things together and kept going strong.”

Cummins then pinned Eagle River’s Liam Rogers at 1:58 of the consolation semifinals and defeated Wasilla’s Chase Foss (28-8) by a 9-4 decision for third place.

"It was the biggest tournament of the year and a lot of new teams," Cummins said. "It was really hard, there were no easy matches. It was, overall a good, tournament. There were a lot of people there I hadn't seen in a long time. I was one point away from being a finalist but third, I'm not disappointed with that, I'm happy with third. I ended up winning my last match so I need on a good note too. Coach has been talking to me about not pulling my opponents on top... I have to be more technical, not as sloppy. Our team has really improved. Almost everyone is a freshman, we have like 15 people and there are five upperclassmen. Their are 10 freshmen and they have definitely proven themselves, putting in the work and stuff, they work hard at practice... me and the other team captains pushing them is really good too and we get to teach them everything we know."

“When we went into the seeding meeting they definitely took notice of Sage,” Messmer said. “He was seeded third before the tournament started and some coaches in the room thought he should be seeded first. He just had two matches that were kind of tough.”

Richards (9-2) opened the tournament with a pin of Delta’s Setphen Hunt at 5:16 and then pinned Ketchikan’s Conner Ray at 3:06. Richards next pinned Palmer’s Lucas Frank at 1:48 of the quarterfinals.

“It was my first big tournament so I think that probably played a factor in how I did,” Richards said. “I think I just need to work on some technique stuff and a couple things I could tighten up here and there.”

Richards would lose by decision to Soldotna’s Hunter Richardson in the semifinals and to Colony’s Hunter Thornhill by a 9-4 score in the consolation semifinal.

“Really close matches,” Messmer said. “They just didn’t go his way. It was going to come down to who ended up on top. His stamina is getting better and he wants to improve on that. This is the first time we have seen those guys in a while. We didn’t get to go to Lancer last year and State is kind of a quick tournament. But to see what those guys are working on and see where their stamina is too. When you go into the third round with guys it is really telling who has been running and putting in the cardio. If you can drag a match into the third round and you have better cardio there is a pretty good chance you are going to come out a head.”

Junior Jarrell Williams had one win and two losses at 152-pounds, senior Blaze Darbonne went 0-2 at 140 and freshman Colton Cummins went 0-2 at 103.

“They knew it was going to be a rough tournament and they needed to see what that next level is,” Messmer said. “They are really competitive at their weights, they needed to see the next level. I think everybody that went up there saw things that they want to come back and work on in the room.”

Continued Messmer, “Our team was very composed up there. We’re shaking hands and helping guys up. But there is an emotion to it when you get off the mat after losing a tough match. We stay composed on the mat, when we go into the hall way you might see a tear or two or get a little bit of frustration, that is where you take it back into the room and work on things that make yourself better to get to that next level. All those guys realize that and that is really encouraging to see.”

The Falcons also entered some of their first year high school wrestlers in the junior varsity tournament which featured some of the upper class wrestlers from the larger schools across the state.

“The JV’s did really well,” Messmer said. “I was really proud with how they stepped up. You can get really nervous when you see that many matches going on at the same time and that many people in one spot.”

Freshman Justus Darbonne placed third at 140-pounds, winning by decision over Colony’s Dominick Binder, by pins over South’s Andrew Murray, Wasilla’s Benjamin Spangler, by decision over Nikiski’s Oliver Parrish and by pin over Eagle River’s Lucas Peters. His one loss was by pin.

Sage Shultz placed fourth at 130-pounds, winning by pin over Tok’s Ethan Gunter, by decision over Soldtona’s Nicholas Rackley and by pin over West Valley’s Titus Penwell. His two losses were by pin.

Freshman Milo Sidlo went 1-2 at 112-pounds, winning by a major decision over Lathrop’s Mason Philp, losing by pin and by a 3-2 decision.

Freshman Owen Woodruff went 1-2 at 119-pounds, winning by pin over Chugiak’s bronco Pyziak and losing by pin and by 10-7 decision.

Freshman Jacob Katasse went 1-2 at 130-pounds, winning by pin over Colony’s Devon Smith and losing by a pin and a decision.

“The junior varsity wrestlers definitely stepped it up a notch at this tournament,” Messmer said. “I’m looking at who is in what weight for the whole state and a lot of those guys I have seen and known before. I know the caliber. It just kind of comes down to getting them some more exposure at bigger tournaments. Some of our younger varsity guys have been to similar tournaments but not to this extent at the high school level. The junior varsity tournament was not a cake walk by any means. There were some tough guys in there. Ketchikan had multiple seniors in the JV that were no slouches, they had five kids in the finals. Teams put tough guys into the JV.”

The Falcons next host the Brandon Pilot Invitational on Dec. 3-4. 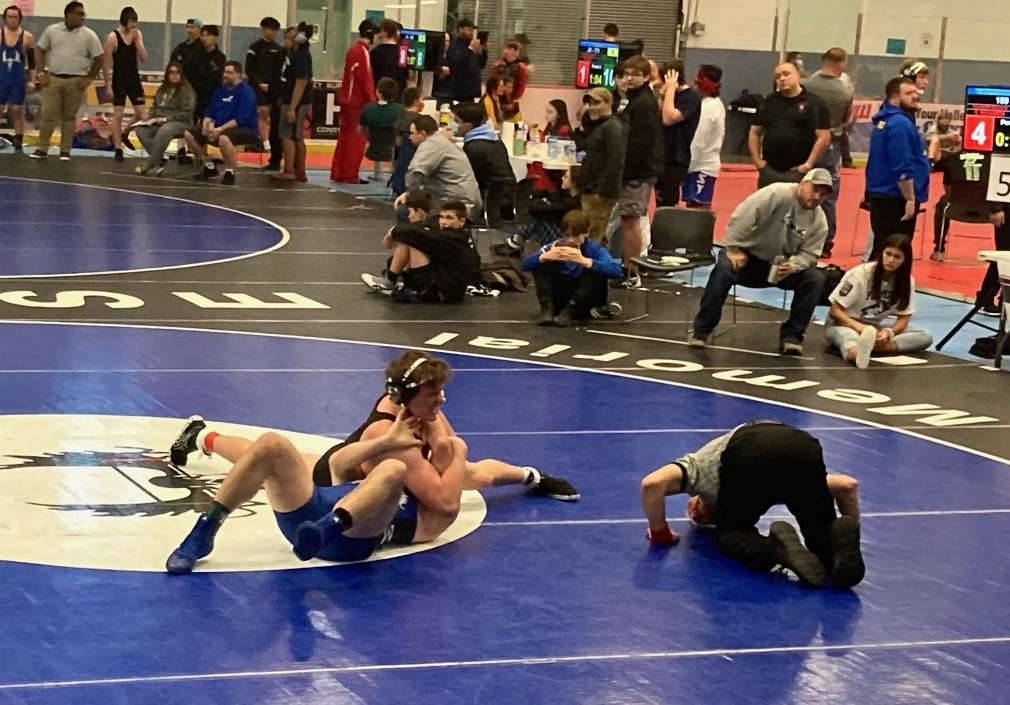 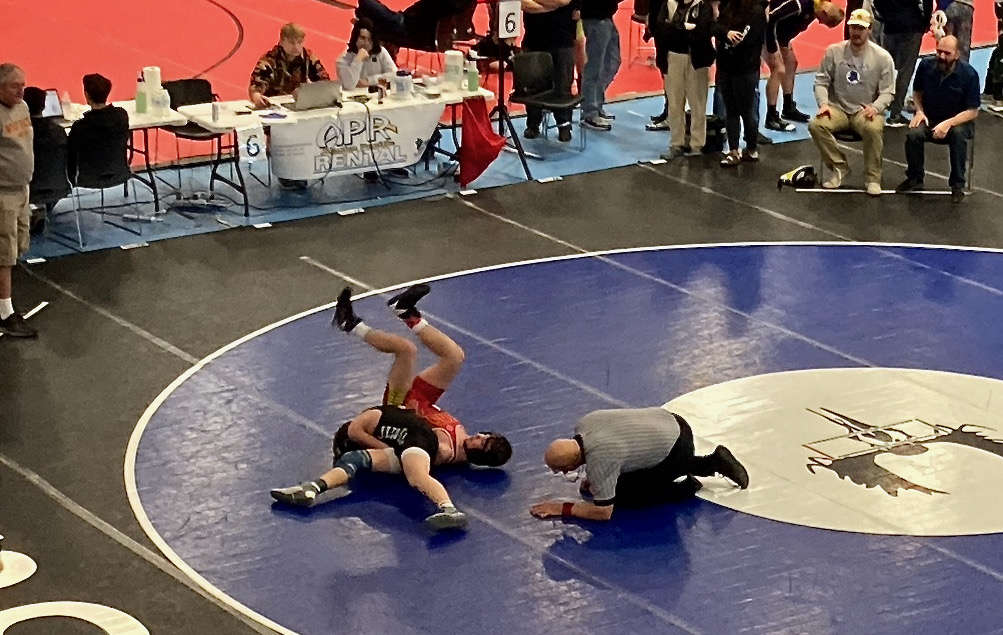